Picture this scenario: you wake up at 7 AM, grab your phone and start catching up on everything you’ve missed since you last checked six hours ago.

You snooze your alarm three times while you scroll down your Facebook newsfeed, and when you finally reach the same posts that you’ve already seen the night before, you make sure to catch up on Instagram as well. Before you know it, it’s 8 AM and you’re still in bed.

Consumers are spending tons of time online, much of which is spent on feeds. In fact, an analysis of publishers that have implemented Taboola Feed are showing a 2.14% decrease in bounce rates on average.

Chauncey Neyman, a computer scientist who studied addictive software designs in California, claimed that consumers are spending more time on feed formats than they originally intended.

Surprisingly, the reason why is related to M&M’s.

The unit bias: infinite scroll is like a quarter-cup scoop of M&M’s

Three scientists from the University of Pennsylvania ran a series of studies regarding portion size and food intake. In one of the studies, they set a large bowl of M&M’s at the entrance to an apartment building and put either a tablespoon scoop or a quarter-cup scoop (depending on the day) in the bowl with a sign to ‘please use the spoon to serve yourself’ and ‘Eat Your Fill’.

The above phenomenon is called the “unit bias” and is explained by the tendency to interpret
the unit in front of us as a culturally ‘‘proper’’ portion—in this case, a tablespoon or quarter cup.

The study claims that this might be the source to the pressure that we feel to finish what’s been served to us and what’s on our plate.

If we take this to the world of infinite feeds, because there is virtually no end to the materials we can consume via infinite scrolling, consumers have the tendency to consume much more.

Similar to the unit bias, here too people tend to ‘finish what’s on their plate’, or, finish what’s been given to them on the webpage.

This leads to consumers spending much more time on infinite feeds than originally planned.

Taboola has been offering publishers an infinite-scrolling feed of content. Not only has RPM gone up substantially, but we’re also seeing other engagement metrics changing, like bounce rates for example.

In a sample of over 500 publishers who have implemented Taboola Feed, we saw a decrease of 2 to 3% in bounce rates as opposed to a standard widget—for mobile more than for desktop. 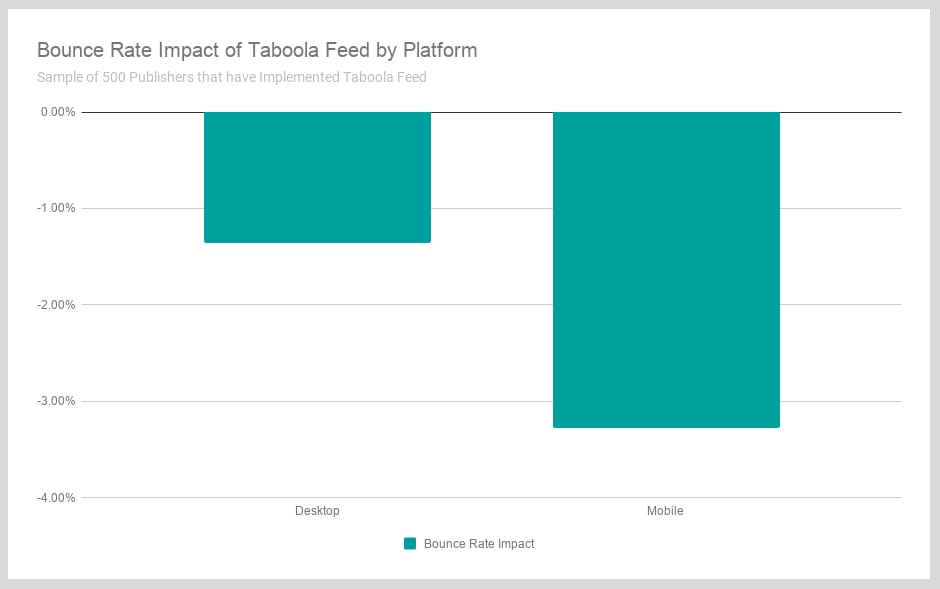 Consumers who are engaging with Taboola Feed are bouncing less from publishers’ sites. The common visual cues they associate with an end to their browsing session—things like the article’s comment section, other navigation button, or a page footer—are lacking.

Thus they interpret the whole feed as one unit that they want to ‘finish’, and ultimately consume more content.

Infinite feeds as the ultimate solution

The human tendency to want to ‘finish’ is one contributor to the growing amount of time that consumers are spending on infinite feeds, and part of the reason why so many publishers are using Taboola Feed.

Taboola Feed recommends users the best content for them, in an engaging environment much like social feeds.

Taboola Feed has already been implemented by publishers worldwide, including the NY Daily News, Euronews, Bauer UK, BT, weather.com, and many more.