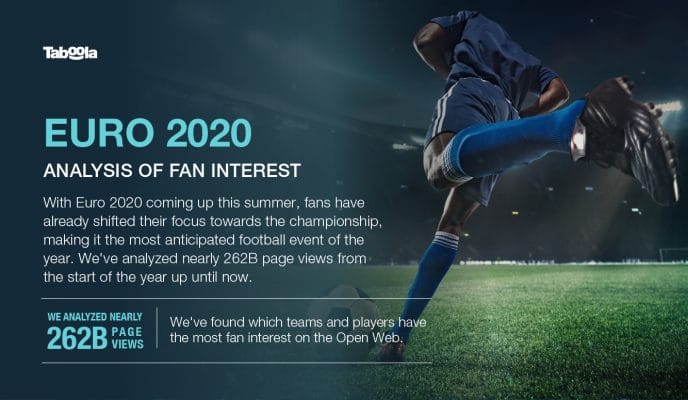 With UEFA’s Euro 2020 coming up this summer, fans have already begun to shift their focus towards the championship, making it the most anticipated football (soccer) event of the season. But which team will win?

Taboola analyzed nearly 262 billion page views from the start of the year up until now. We discovered which teams and players have the most fan interest on the Open Web. Don’t throw away your shot at creating engaging Euro 2020 content. Score our results below.

Spain Dominates, While France Comes Out on Top Against Germany and Portugal

Based on the number of page views related to Euro 2020, we have concluded which teams would be the most popular in their corresponding groups. While these results seem to play out the way fans might expect, we did encounter some “striking” underdogs rising to the occasion. 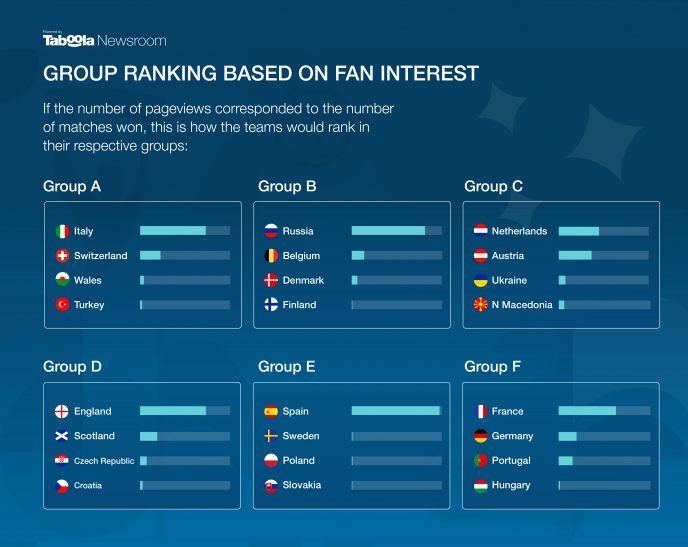 Relative to its group, Italy is the clear winner in Group A. While unsurprising due to its comparative lack of competition in the group (don’t come for us, Wales), it’s important to remember that Italy failed to qualify for the World Cup in 2018.

It’s not shocking to see The Netherlands and Spain at the top of their groups, considering they have dominated as perennial powerhouses in international football for some time.

Perhaps the most unexpected results are seen in France and Croatia, who you could have predicted would have more fan interest since they competed at the 2018 World Cup Final. The 4-2 final saw France bring the trophy home to the Champs-Élysées.

The Dream Team Based on Fan Interest

Based on fan interest, calculated by the number of page views per player, here would be the tournament’s “Dream Team.” 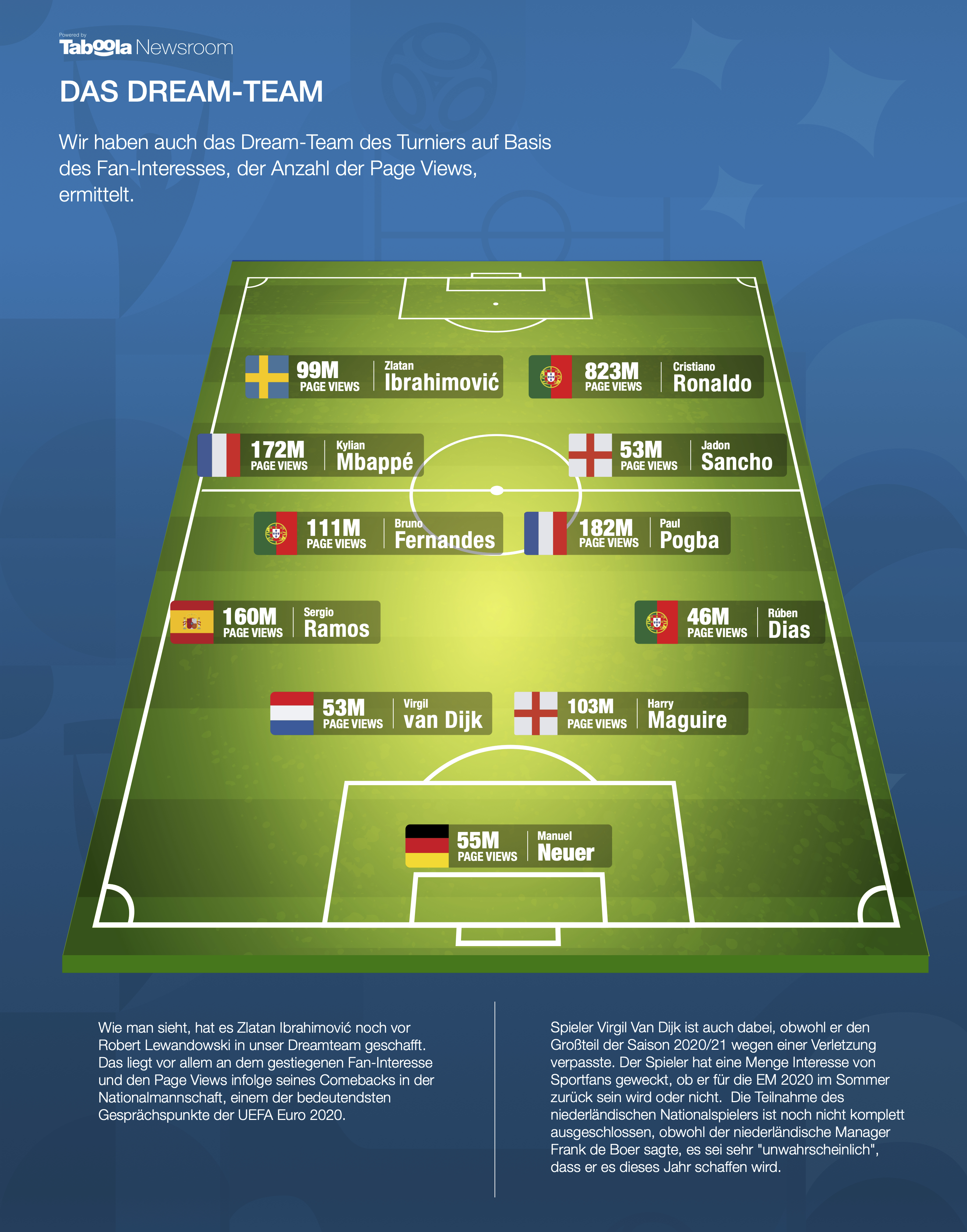 Because of the overwhelming page view turnout for centre-backs, we’ve had to flex our imaginations and spread Sergio Ramos and Ruben Dias as left and right backs, respectively.

This shouldn’t be too surprising, considering the average defender will cover around 10.5km during a single match.

As you can see, Zlatan Ibrahimovic has managed to make it to our “Dream Team” above Robert Lewandowski. This is mainly due to the increase of fan interest and page views resulting from his comeback to the national team, one of the most significant talking points of UEFA Euro 2020.

Player Virgil Van Dijk is also part of our “Dream Team,” despite missing most of the 2020/21 season from being injured. Van Dijk has sparked a lot of interest from sports fans, hoping to learn whether the towering force of a defender will be back for the Euro 2020 this summer.

The Dutch international has not been ruled out completely just yet, despite the Netherlands Manager Frank de Boer saying that it is very “unlikely” that he will make the squad this year.

These are the Most Anticipated Matches of the Group Stages

36 matches will be played during the Group Stage. With fan interest by page views in mind, we’ve discovered the most anticipated matches in each group. 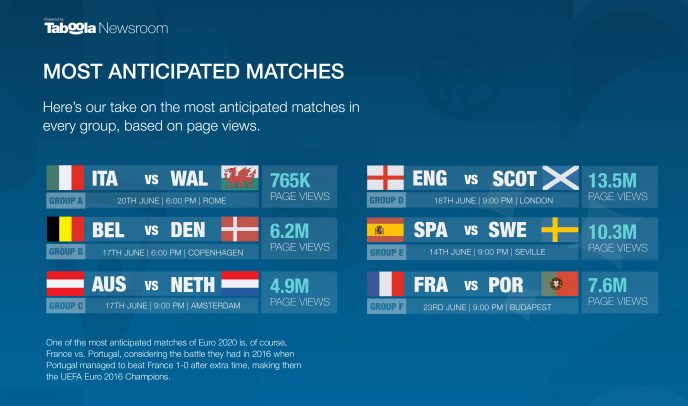 One of the most anticipated matches of Euro 2020 is France vs. Portugal, considering the battle they had in 2016 when Portugal managed to beat France 1-0 after extra time, making them the UEFA Euro 2016 Champions.

You may remember Eder tracking his way through French defenders before blasting an unreachable shot to goalkeeper Hugo Lloris’ right side. Based on page views, we can predict this will be the match everyone is reading about.

According to the Number of Page Views on the Open Web, This is our Predicted Euro 2020 Champion

Let’s get right to the punch. (Or kick?) If the Euro 2020 winner were decided by how much content their fans read about on the Open Web by their favorite teams, Spain would take home the trophy.

We based the odds of each team winning on related page views and created a simulation of the final phase.

Based on our simulation, Italy, France, Spain, and the Netherlands reach the semi-finals, but only France and Spain make it to the final duel, and Spain takes the title! 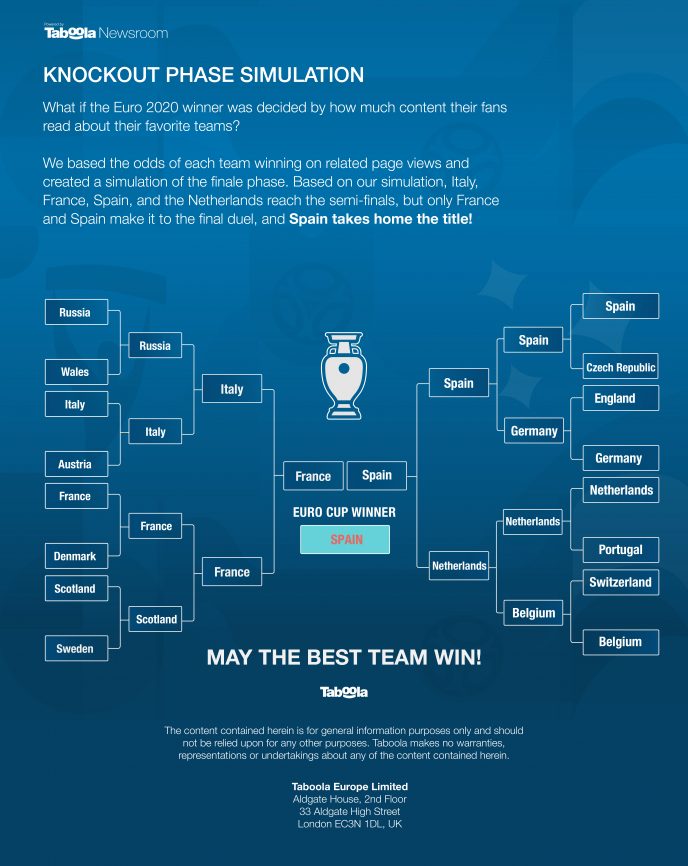 While you may think these results are “off the ball,” don’t be on the “wrong side” of content creation. Consider these results when determining which teams to cover on your publication.

For other exciting insights about readers on the Open Web, take a look at the readership data section of our blog.