The pinnacle of the football (soccer) season is here—World Cup 2018 in Russia. All the leagues have crowned their champions and the fans have shifted their focus towards the most watched event on the global sports calendar.

Taboola analyzed nearly 9B page views on premium publisher sites (about 70M hours of reading) from the start of the 2017/2018 football season up until now. By analyzing the text on these pages, we’ve discovered the teams and players with the most fan interest on the open web.

Based on the number of page views related to the World Cup, we saw how the teams would stack up by group.

While most standings correspond with what fans might expect in reality, we did encounter some surprises.

This would lead to a clash of the two titans, Brazil and Germany, in the round-of-16. Despite the sensational season of Mohamed Salah, Egypt would be going home early with just 8% of Group A page views.

It’s not our intention to fan the flames of the ‘who’s better’ debate between Messi and Ronaldo, but when it comes to fan interest, the Portuguese phenomenon totally dominated the Argentinian Flea with almost three times more pages read about Messi.

Mohamed Salah of Egypt completes a lethal trio in the starting XI, keeping Neymar of Brazil and Robert Lewandowski of Poland on the bench.

See below the tournament’s Dream Team based on fan interest, as indicated by page views: 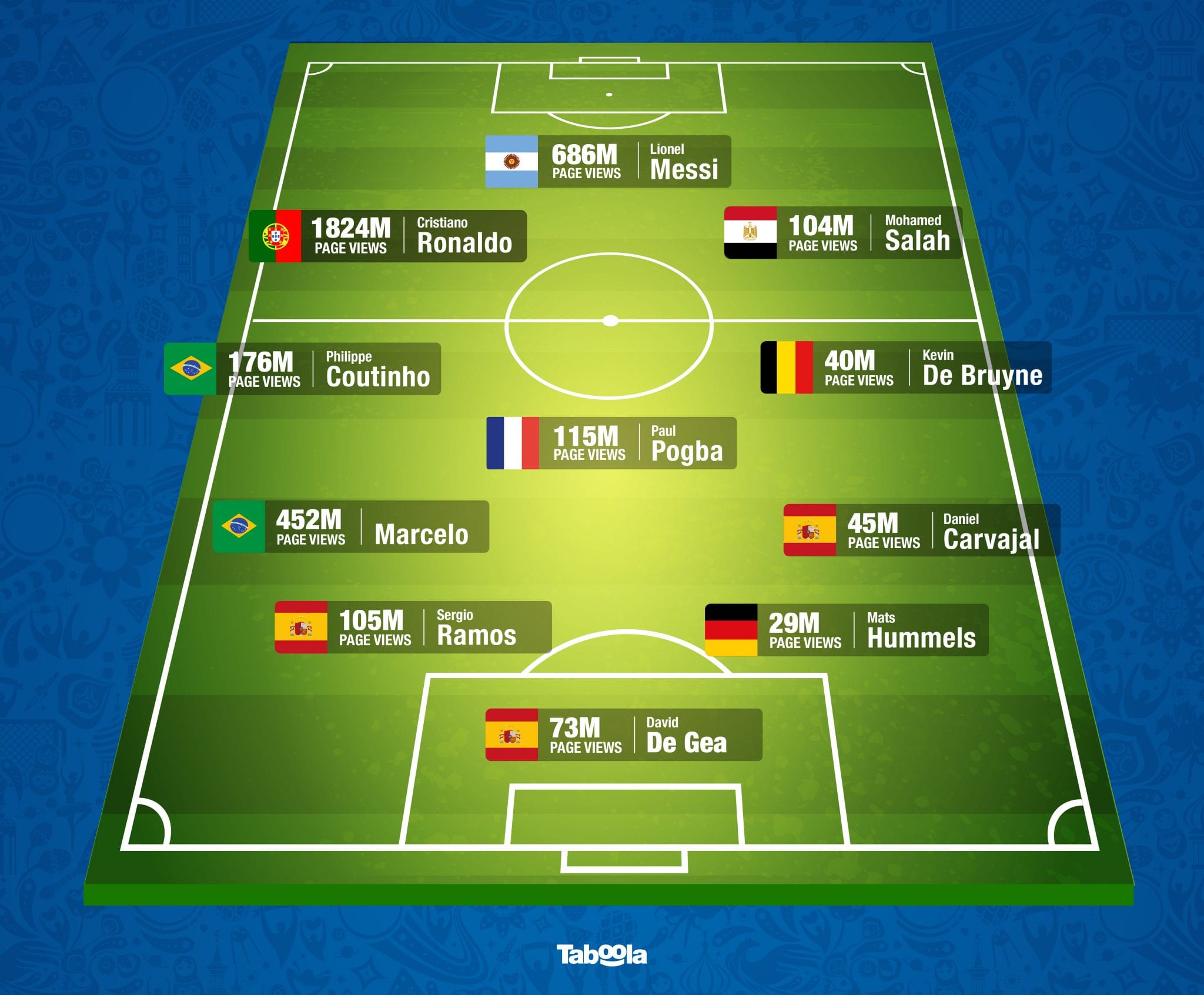 Scoring goals will get you interest—or will it?

In order to test our hypothesis that goals scored equals fan adoration, we looked into the players who’ve scored the most goals in the World Cup qualification to see if there was a correlation between the number of goals they scored per match and the level of fan interest. 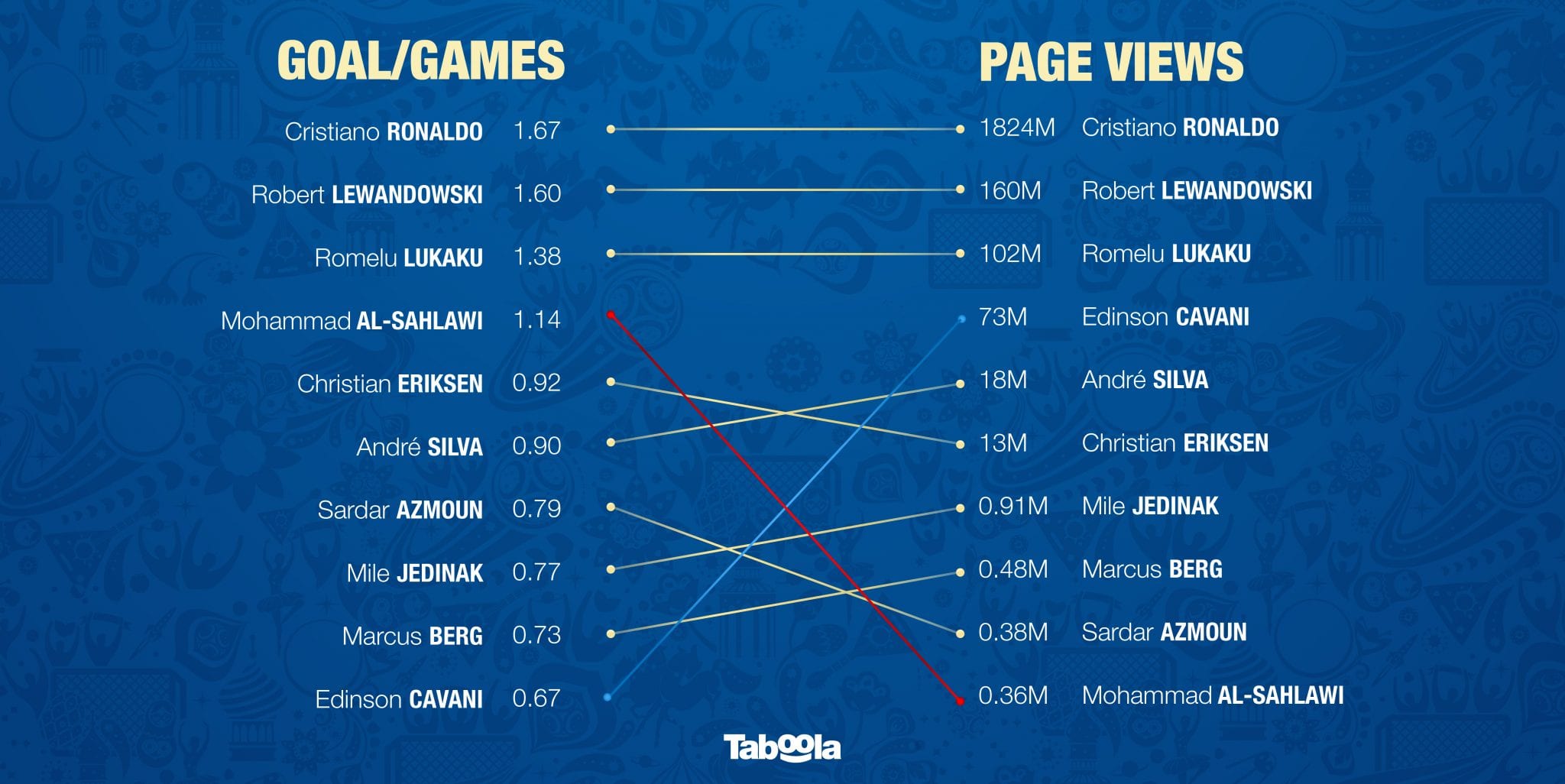 We found that while goals scored and views do correlate among the top three players, the trend drops off with Saudi Arabia’s Mohammad Al-Sahlawi—goals scored do not always translate to fan interest.

These are the most anticipated matches of the group stage.

48 matches will be played in the group stage. Based on fan interest by pageviews, we’ve discovered what are the most anticipated matches in each group. Make sure to tune in and watch!

According to the open web, this is the predicted world champion.

What if the World Cup winner was decided by how much content their fans read about their favorite teams?

We based the odds of each team winning on related page views and created a simulation of the knockout phase. While we can’t predict who’s going to lift the trophy on July 15th in Moscow, Colombia reaches our simulated quarterfinals, Mexico takes the role of the dark horse and makes it to the semis, and Argentina takes home the title in a very much anticipated clash against their arch-rivals Brazil. 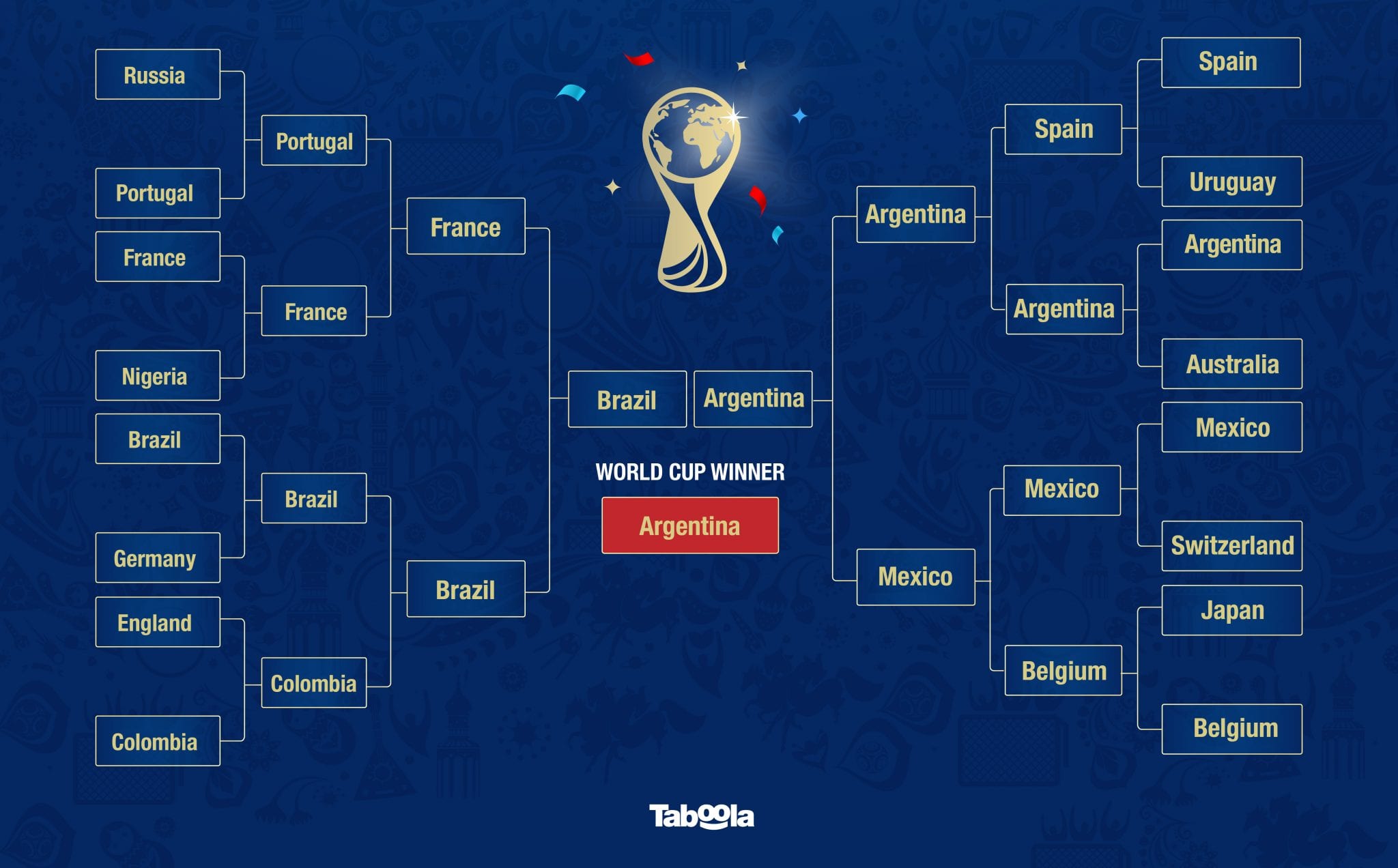 The opening whistle hasn’t sounded yet, but we’re already warmed up and ready to go. May the best team win!

For other interesting insight pertaining to readers on the open web, check out the readership data section of our blog.

In anticipation of the excitement around the world cup, Taboola released an audience segment for marketers targeting World Cup fans. Start your campaign below to get started!