The Science Behind Why We Spend More Time on Infinite Feeds

In today’s online reality, users are constantly consuming content and publishers want them to do this on their own websites instead of on social media platforms.

Infinite feeds have been proven to keep consumers engaged on publisher sites. We’ll explore how a specific cognitive bias, related to investment, affects this behavior.

When we invest, we want a reward.

We all have the tendency to continue investing in things in which we’ve already spent so much time and resources.

From deciding to spend money fixing a car that you love instead of spending that money on a new car, to decisions like continuing a complex romantic relationship because you’ve been through so much together. These decisions aren’t necessarily wrong, but they’re not necessarily motivated by logic, instead they’re mostly motivated by past investment.

This is illustrated through a study by economic researchers at the University of California, Santa Cruz, which found that players in a game searching for a treasure trove on different islands remained longer on the islands to which it was more costly to travel.

They tended to keep ‘digging’ for longer, rather than continuing to a new opportunity. We behave like this because we have a tendency to need a reward from something we’ve already invested in—be it money, time or effort.

In psychology, this is one of the more well-known cognitive biases.

Scrolling is an investment.

A recent analysis of 500 publishers who’ve implemented Taboola Feed found that the more time a consumer spends on a feed, the higher the chances were that they would click on a recommended link. 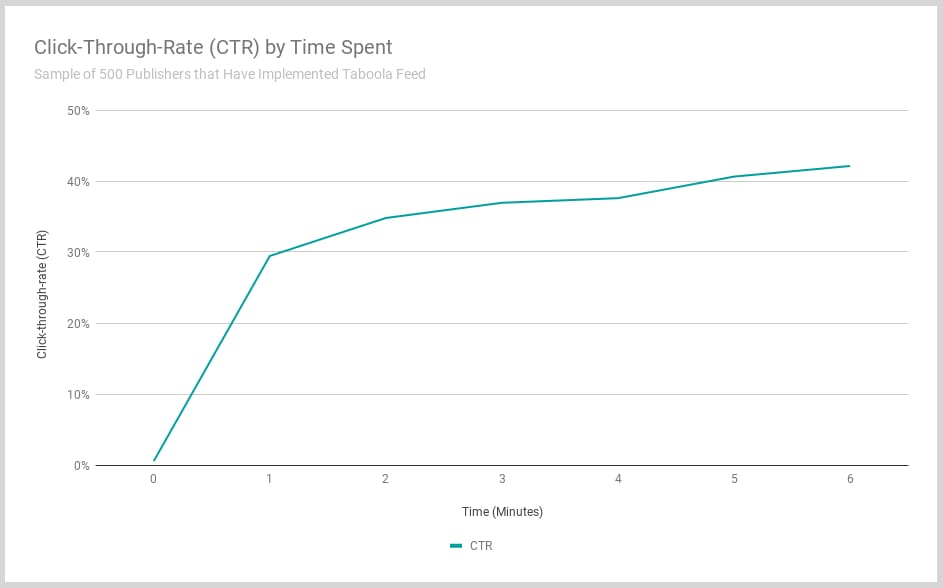 Content consumers want a return for the time they’ve invested; therefore, they continue scrolling until they find something of interest and then they click—just like the partner in the long term relationship and the players searching for treasure on the costly islands.

The combination of time invested and the infinite feed experience provides the ultimate solution.

The reason that content consumers keep scrolling runs deeper than investment. Psychologists have also attributed this behavior to the human tendency to prefer avoiding a loss even more than acquiring equivalent gains. For example, we prefer not to lose $100 than to find $100.

When experiencing an infinite feed, we tend to avoid the loss of the time we already spent by continuing to scroll, rather than to go to a new site and perhaps gain something new.

The human tendency to continue investing because of a previous investment is one of the contributors to the growing CTR, and why so many publishers are reaping value from using Taboola’s Feed.

Taboola Feed recommends users the best content for them, in an engaging environment much like social feeds. Taboola Feed has already been implemented by publishers worldwide, including the NY Daily News, Euronews, Bauer UK, BT, weather.com, and many more.