“Publishers are well aware that if native advertising is to be a long-term solution, they must deliver tangible business results to the brands.”

Jesper Laursen and Martha Stone, co-authors of the Native Advertising Trends report, came to this conclusion in the 2016 edition of the report. They also stressed:

The 2018 edition came out in December. Let’s unravel some of its highlights and see where we are now based on data collected from 148 news media executives from 53 countries.

The Marketer's Guide to the Major Players in Native Advertising

Native advertising as a percent of revenues.

The report from 2016 predicted in three years, the percentage of native advertising compared to overall advertising revenues is expected to grow by 127%.

The 2018 report made another prediction looking forward three years: the percentage of revenues will grow to 36% in 2021. 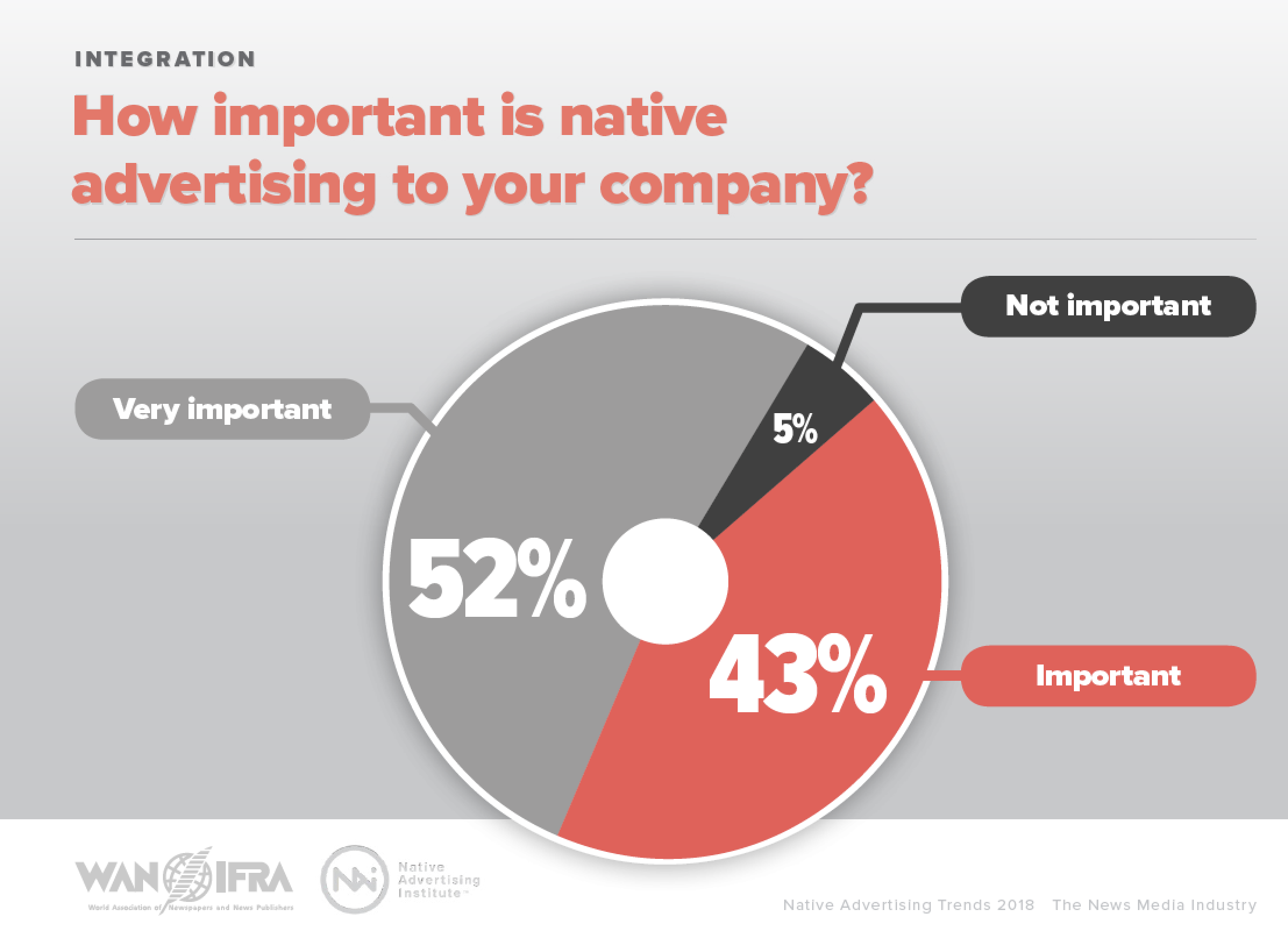 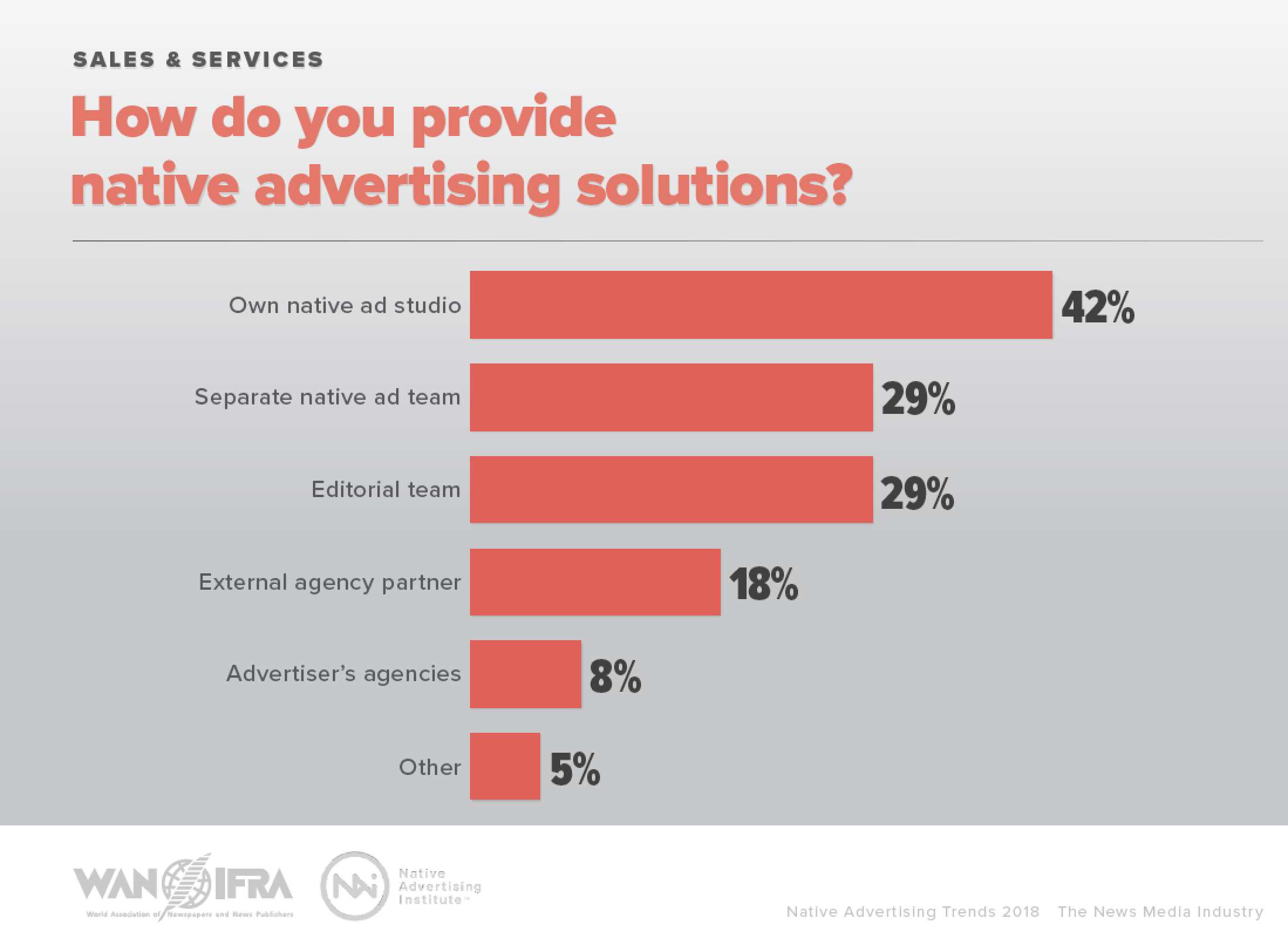 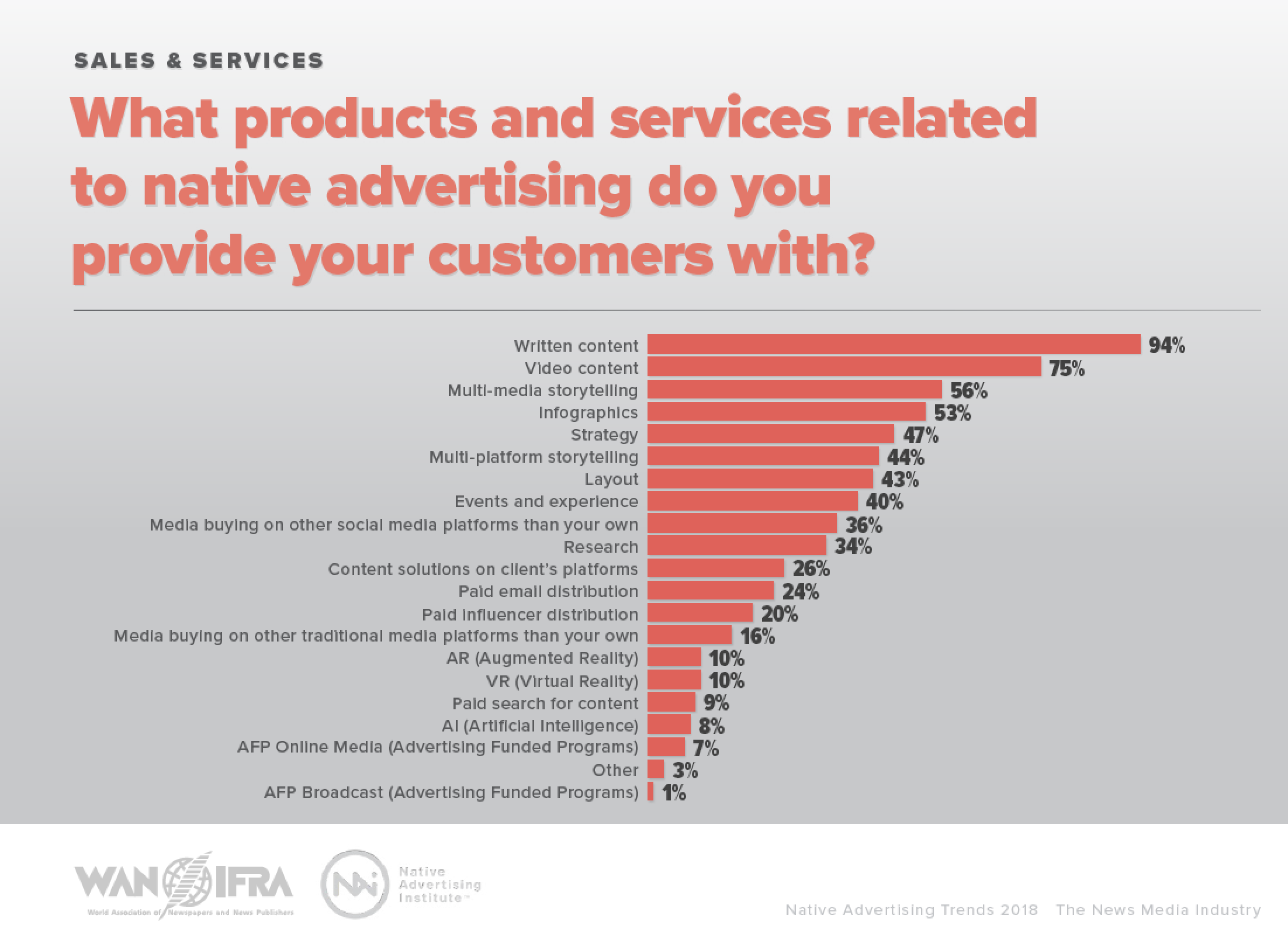 The content being created by in-house media studios serves various stages of the buyer’s journey, though top-of-the funnel content holds the lead.

Less than one-quarter of the publishers in the survey had a team dedicated strictly to native advertising sales, however… 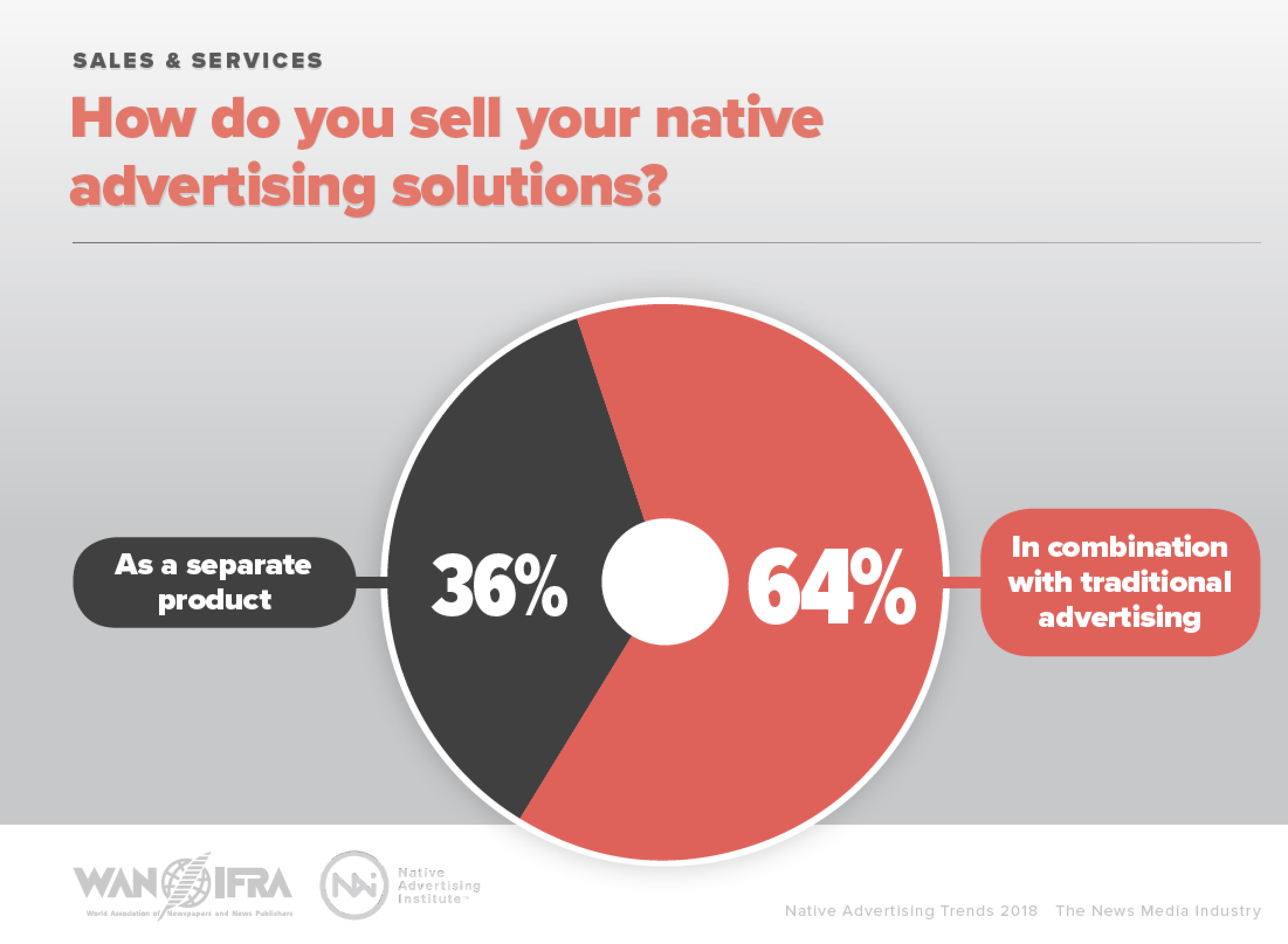 Native advertising is usually sold in combination with traditional advertising… 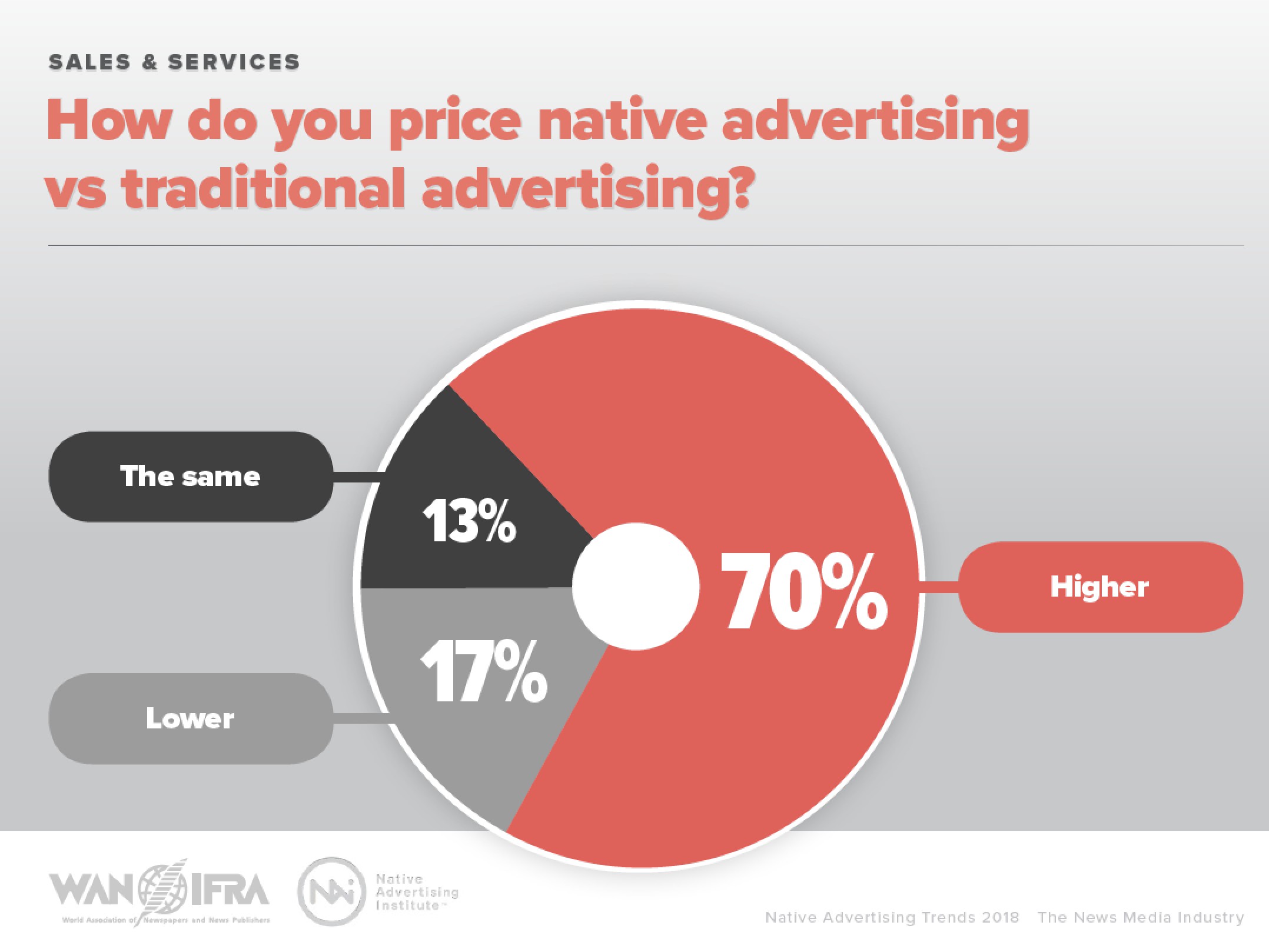 As you’ve gathered, if you ask the publishers that sell—and in most cases create—native advertising, they’ll tell you yes, native’s working out great for publishers. 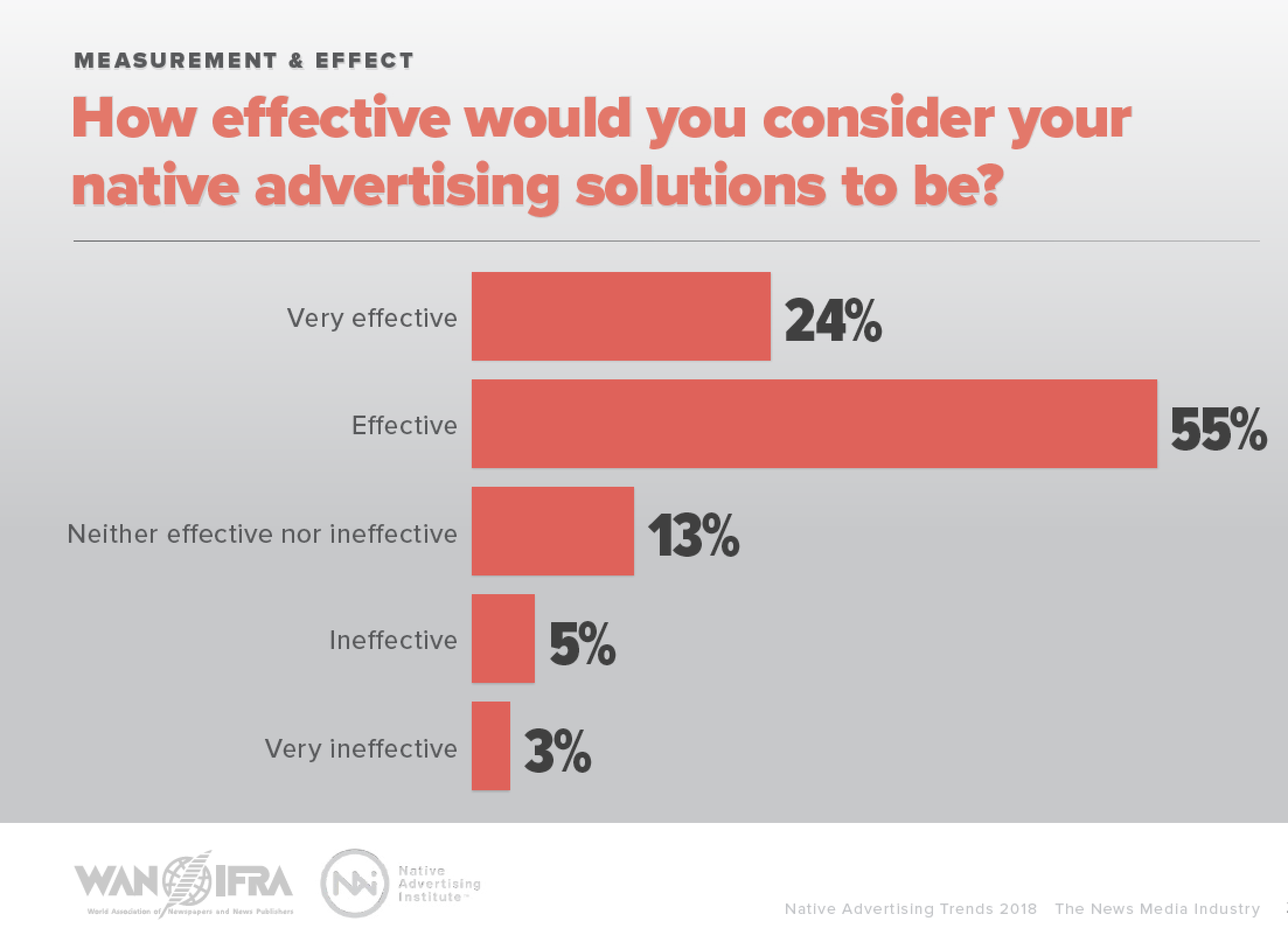 Native advertising is working for advertisers. 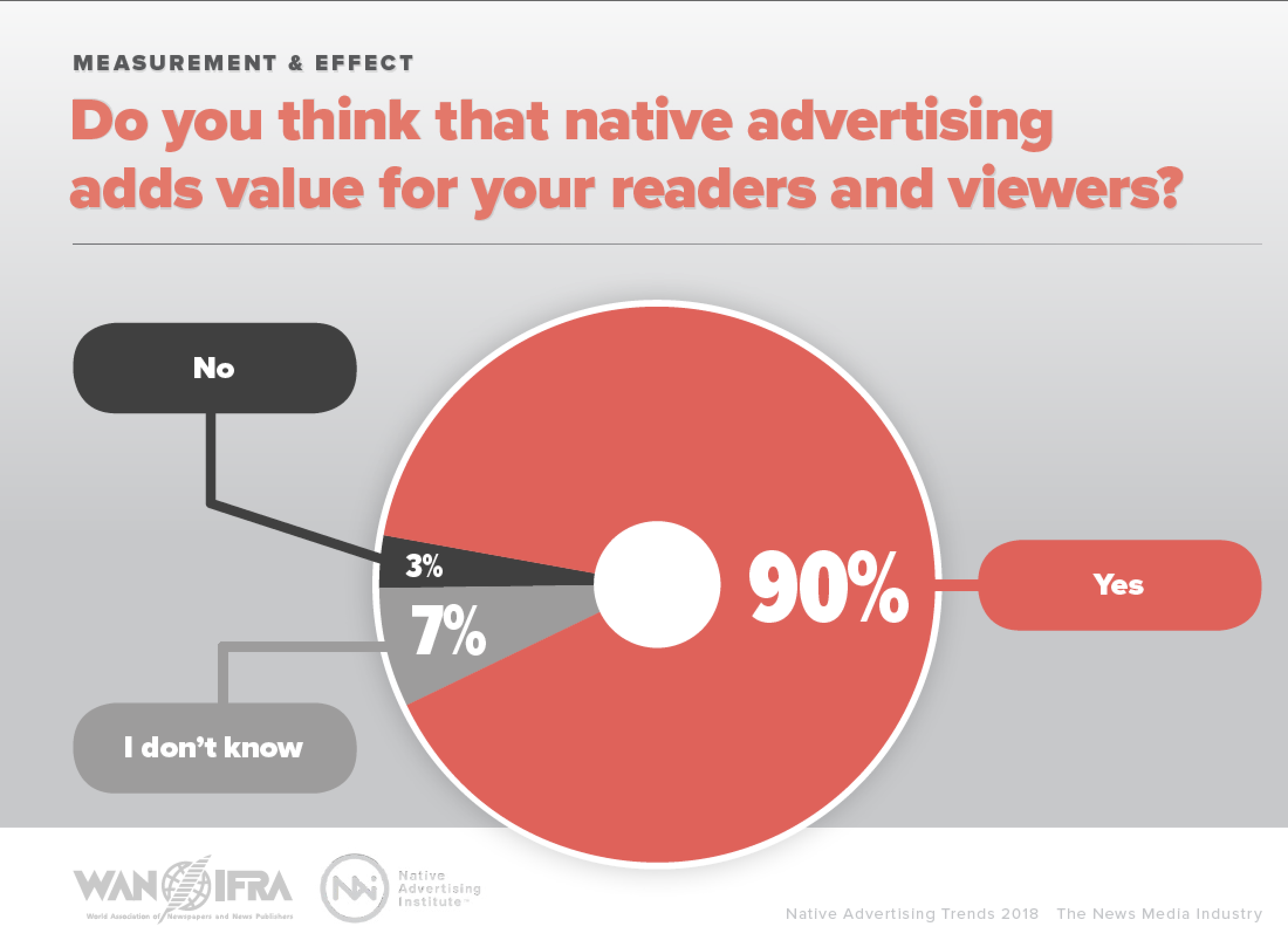 And readers enjoy it.

Metrics, KPIs, reporting… Now here’s a topic that’s bandied about often, evolving regularly, and a bit tricky to unravel. That said, the report did a good job of gathering insights regarding native advertising KPIs used by publishers. 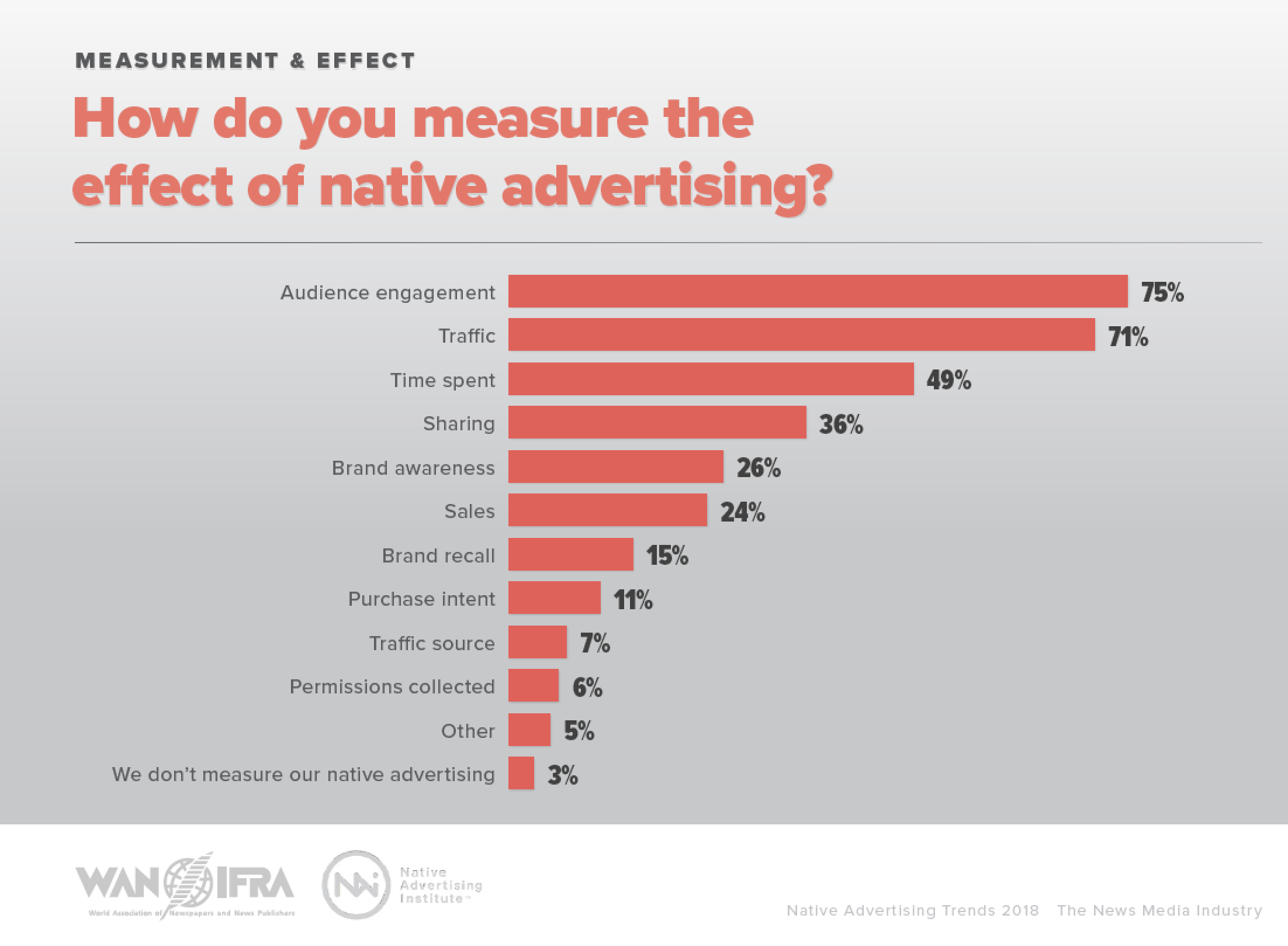 Audience engagement ranked first, though it seems like a bit of catch-all to me. Traffic, which is not only important but also plain and simple to understand, is measured by 71% of the publishers surveyed.

As they did in the first two annual reports, the authors of the 2018 report return the narrative to a perpetual problem: labeling native ads. 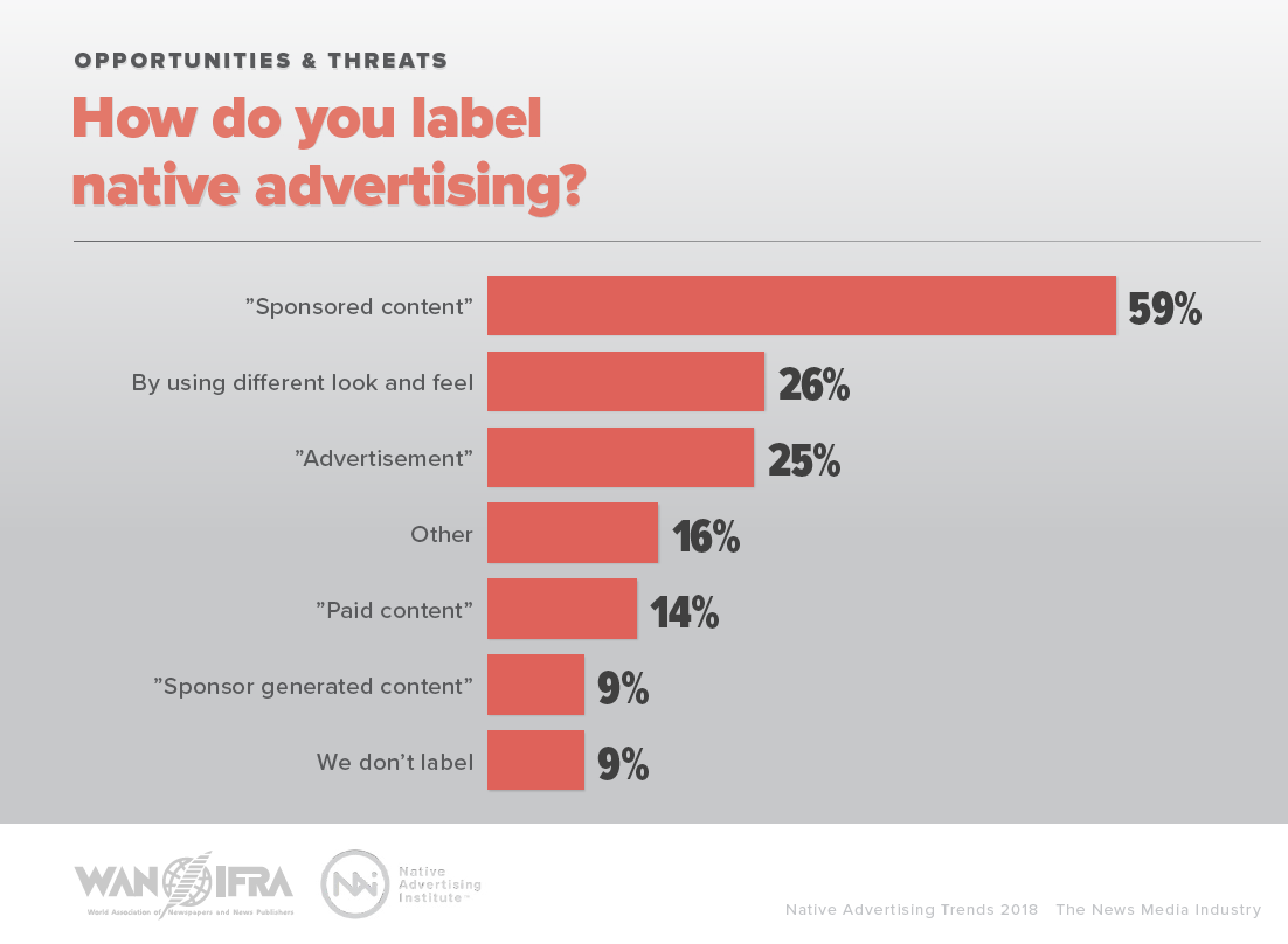 The report says 9% put no label on native advertising. They say the number is slightly more encouraging from years past, but the industry shouldn’t settle for anything other than 100% of native ads being accurately and obviously labeled. 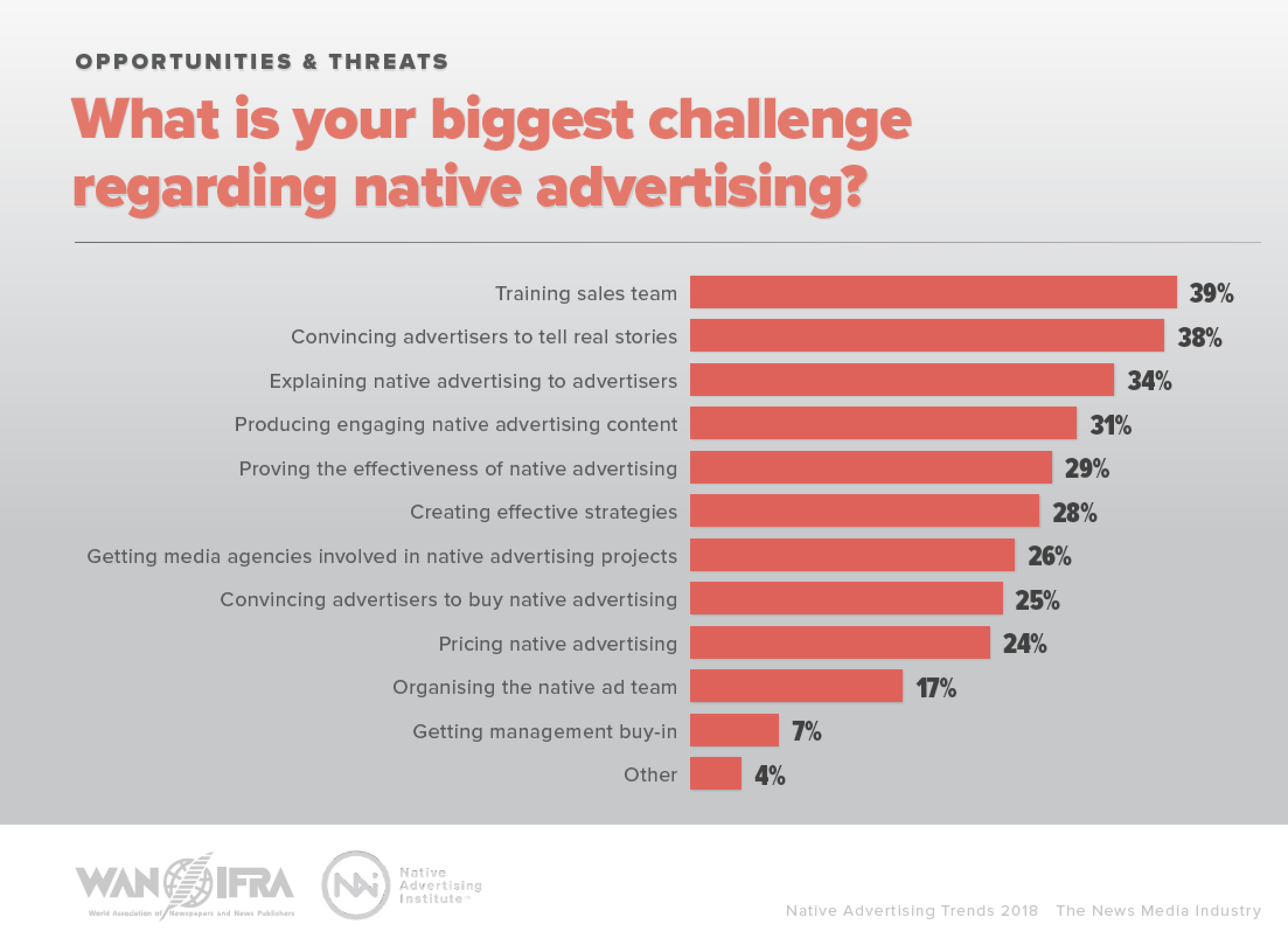 Let’s close by zooming in on the top five challenges publishers face in the booming native advertising arena:

I think tips for addressing these challenges would make a great sequel to this post, don’t you? Stay tuned.

NOTE: Special thanks to the Native Advertising Institute and the World Association of Newspapers and News Publishers. Get a free copy of their full report here.