In the first part of our series, we defined suspense and explored how advertisers can use it in their videos or content campaigns. Today, we’re taking a look at how suspense drive memory of your brand, and the difference between surprise and suspense.

Have you ever watched a hitchcock movie? He’s known for suspense, and marketers can learn from how he incites action in his viewers. He defines suspense in comparison with surprise:

“There is a distinct difference between “suspense” and “surprise,” and yet many pictures continually confuse the two. I’ll explain what I mean.

[…] Let’s suppose that there is a bomb underneath this table between us. Nothing happens, and then all of a sudden, “Boom!” There is an explosion. The public is surprised, but prior to this surprise, it has seen an absolutely ordinary scene, of no special consequence. Now, let us take a suspense situation. The bomb is underneath the table and the public knows it, probably because they have seen the anarchist place it there […] In these conditions, the same innocuous conversation becomes fascinating because the public is participating in the scene.”

Suspense grabs the attention of the viewer because they’re participating in the narrative with you, and it’s for this reason that they remember videos that incorporate suspense.

Putting suspense to the test. 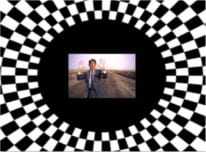 In 2015, an interdisciplinary study was cond

ucted by professors in psychology and brain science from Georgia and New York.

They asked 19 undergraduate students to lie in an fMRI scanner, and watch film clips that had continuously flashing checkerboards (see image below) presented in the periphery of each clip. Participants were instructed to keep their eyes fixated on the center of the screen during presentation of the video clips.

The researchers chose the most suspenseful scenes in 10 different video clips, including Ridley Scott’s ‘Alien’ from 1979, John Glen’s ‘Licence to Kill’ from 1989 and a few of Alfred Hitchcock’s movies himself, such as ‘The man who knew too much’ from 1956 and ‘Marnie’ from 1961.

The researchers wanted to see what happens in the moments of suspense, like when James Bond dodges Sanchez’s henchmen in the sea and air in ‘Licence to Kill,’ or when Brett searches for his pet cat, unaware that an alien lurks in the shadows in ‘Alien.’ See the clip below:

Those same studies produced two major results—viewers were more stimulated by suspenseful videos and remembered details about the video well.

Viewers also remembered slightly more details about events in a video that occur at moments of high suspense better than they do events from the movie’s calmer points.

In an era where online advertisers are fighting for attention, where so many other items on the page are grabbing attention, and when attention spans are so low, using suspense is a great way to get consumers to focus their attention on your brand instead of their surroundings.

When producing product videos, suspenseful videos will help you stick in their minds. Introduce their product or logo in the most suspenseful scene for the biggest effect on a viewer’s memory.