The best way to know what’s going on inside the minds of today’s CMOs as it relates to advertising is to ask them.

Nielsen has done exactly that. They invited 3,000 CMOs to participate in its first annual CMO Report. Though the report does not indicate the precise number of participants, it reveals many useful insights extracted from the results.

Based on the landing page they created for those who wish to download a 66-page copy of The Nielsen CMO Report 2018, it appears the finding they found most significant is…

Only 1 in 4 marketers are highly confident they can quantify ROI.

Digital media earned a slight edge over traditional media in this regard. Very slight.

“As Charles Darwin once said, ‘It’s not the strongest of the species that survive, nor the most intelligent, but the one most responsive to change.’”

“Like with Darwinian evolution, it’s a matter of adaptation and those companies that evolve the quickest will thrive.”

Nielsen’s research sheds light on the challenges CMOs face as they adapt to unprecedented change in the marketing landscape. Respondents made it clear that digital media has had a transformative effect on their organizations and marketing strategies.

Soloman said marketers are leaning into the data, tools and capabilities available today. “While they do not always deliver as hoped, their willingness to invest and experiment—while incorporating the tried and true—continues.”

Let’s look at some of the data in the report, reflect on its findings, and opine a bit. 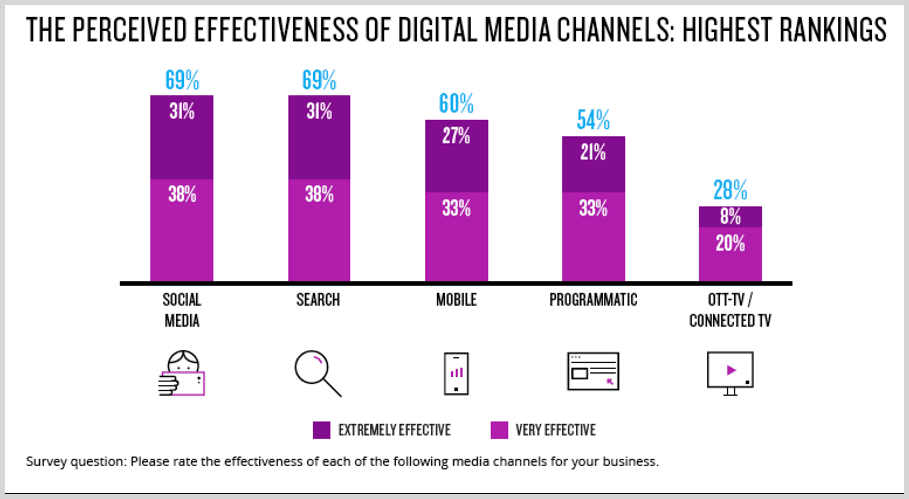 Respondents ranked social media and search as the two most important channels. The results regarding their effectiveness put them at a dead heat.

As you see, the number of channels used in the question was limited, and frankly, I find it hard to think of all of the choices as separate. 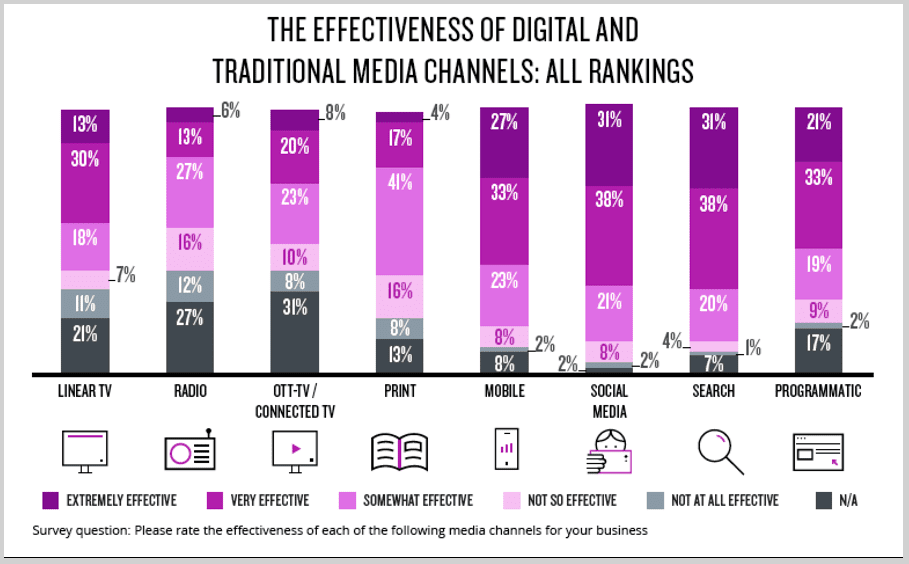 This data looks across a wider range of media channels including TV, radio and print and obviously favors digital with heavy doses of purple in the four bars on the right. 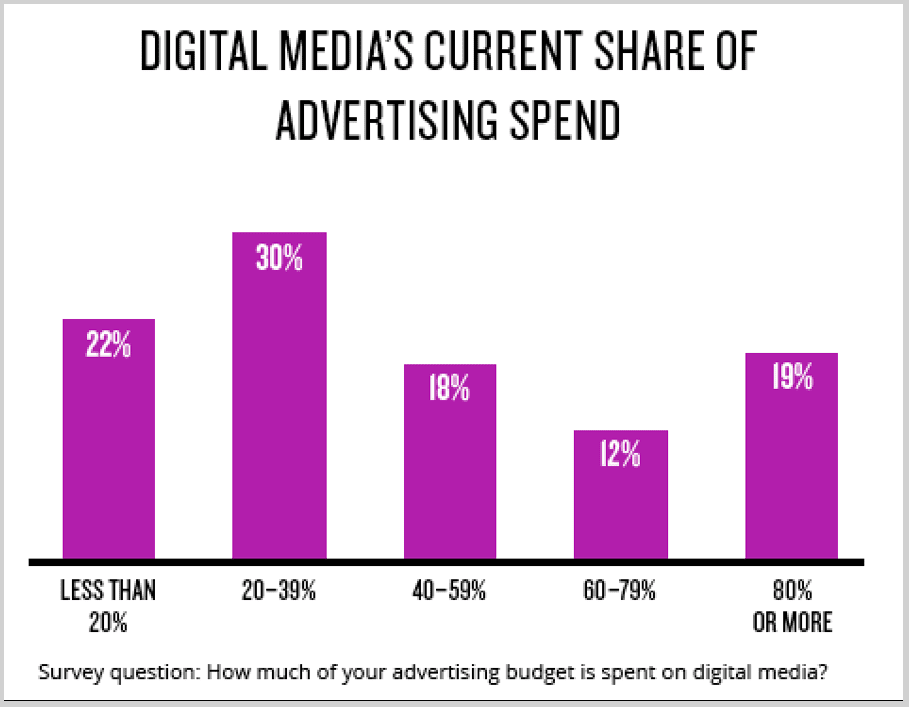 Digital media spend as a percentage is probably below what you might expect. However, an impressive 82% of the survey’s participants claimed their digital media budgets will increase in the next 12 months.

The report says respondents expect, on average, a 49% increase in digital media budgets in the next 12 months. Some respondents reported even higher increases. 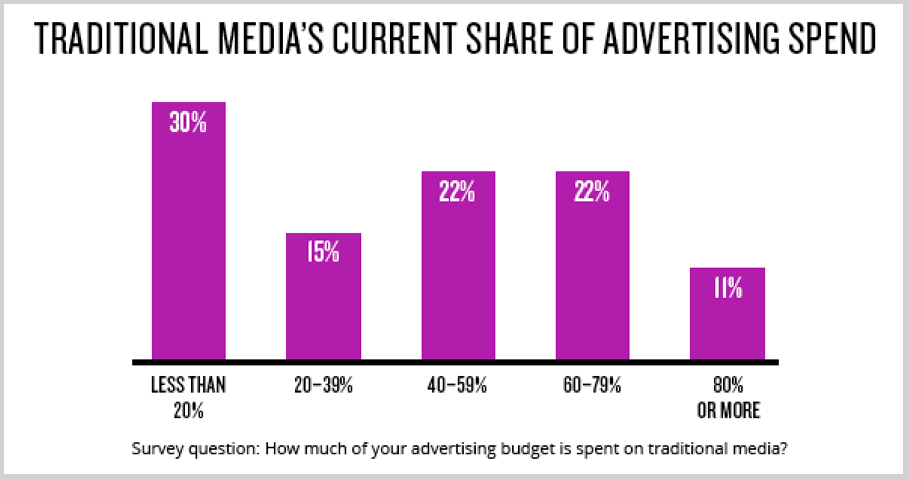 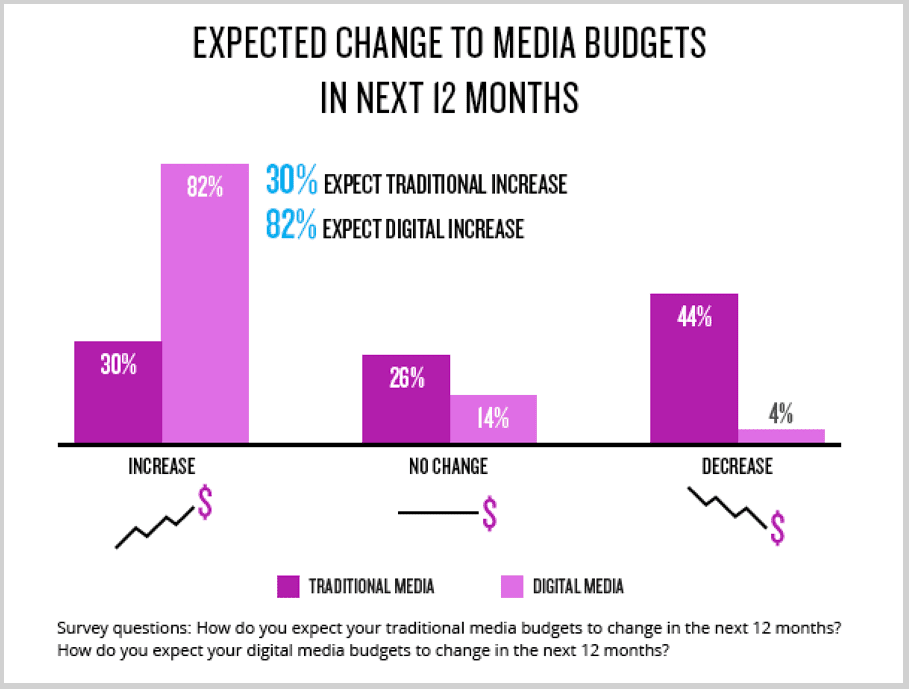 The report’s take on media choices included a specific look at the role of “walled gardens,” that is, the closed media ecosystems run by media channels such as Facebook, Google, and Amazon. 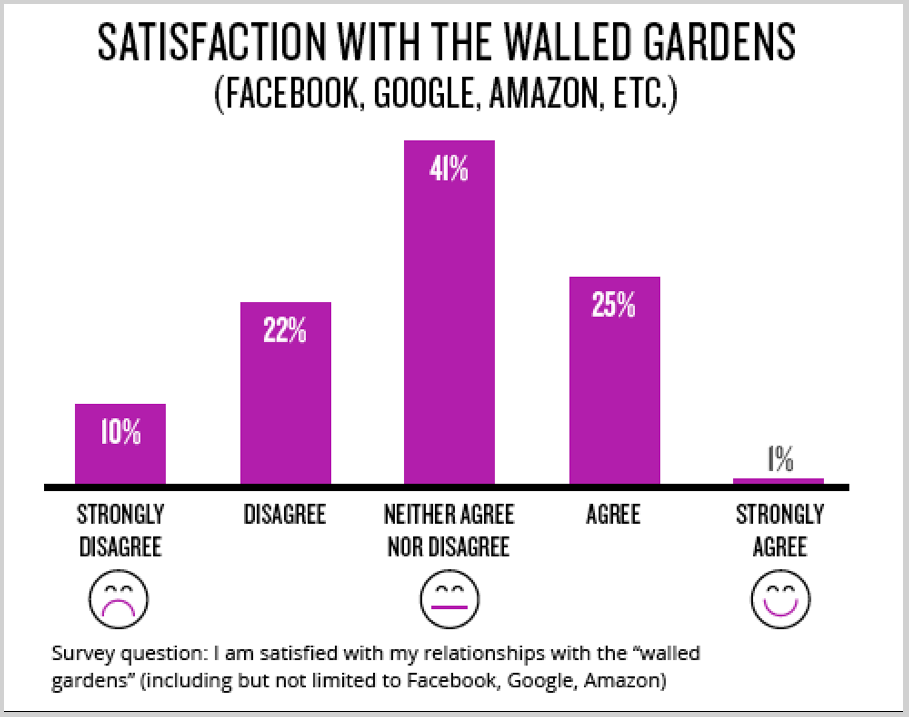 Respondents were largely neutral in their satisfaction with the walled gardens. At Taboola, we find this interesting because we often talk about how our content discovery platform provides a way to increase reach immensely while avoiding the sticker shock that results from aggressively expanding search and social ad budgets.

How to Start a Discovery Campaign From Scratch

The report also touched on the (1) the ability to quantify ROI from the walled gardens (2) the level of trust in the analytics from them. Results very much resembled the spread of responses above. A small minority agreed they could accurately quantify advertising ROI or trusted the analytics. However, again, the largest factions were neutral.

Perhaps the qualitative feedback was more telling. The report claimed:

Comments from interviews of participants included:

I believe the most alarming (or at least conversation worthy) section of the Nielsen report delves into the CMO’s take on marketing technology, and specifically, technologies for measuring ad results. 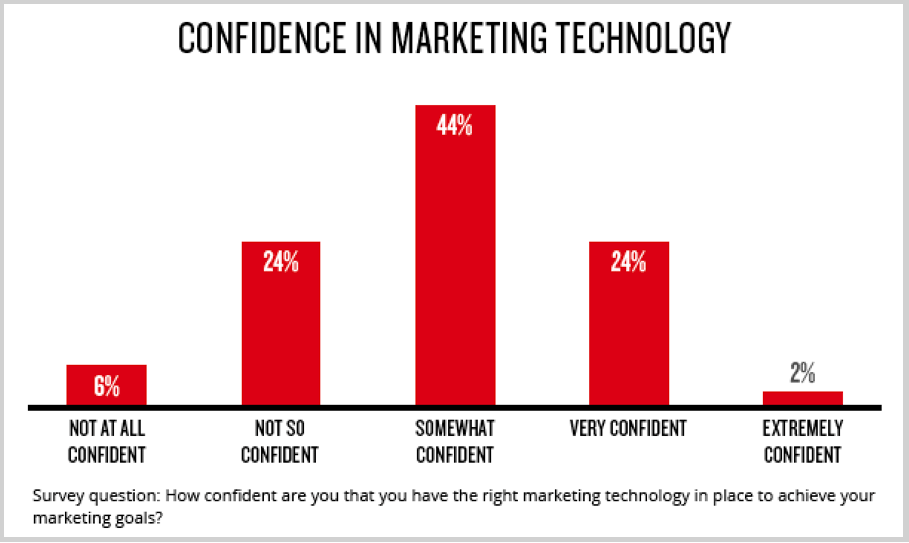 Once again, the largest number of CMOs cast their votes down the middle. While 44% are somewhat confident they have the right marketing technology in place, 30% are not.

Nielson sought to understand the marketing and measurement technologies marketers view as most important, so they asked respondents to rank six core solutions. 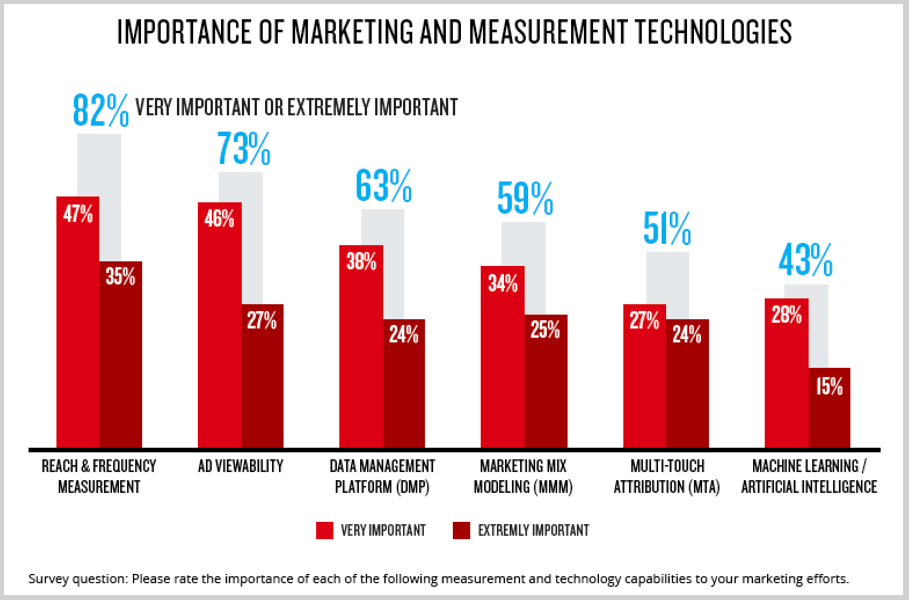 Note how solutions designed to measure and improve the problem of advertising waste topped the list.

Will CMOs take action to improve their ability to assess their advertising efforts? 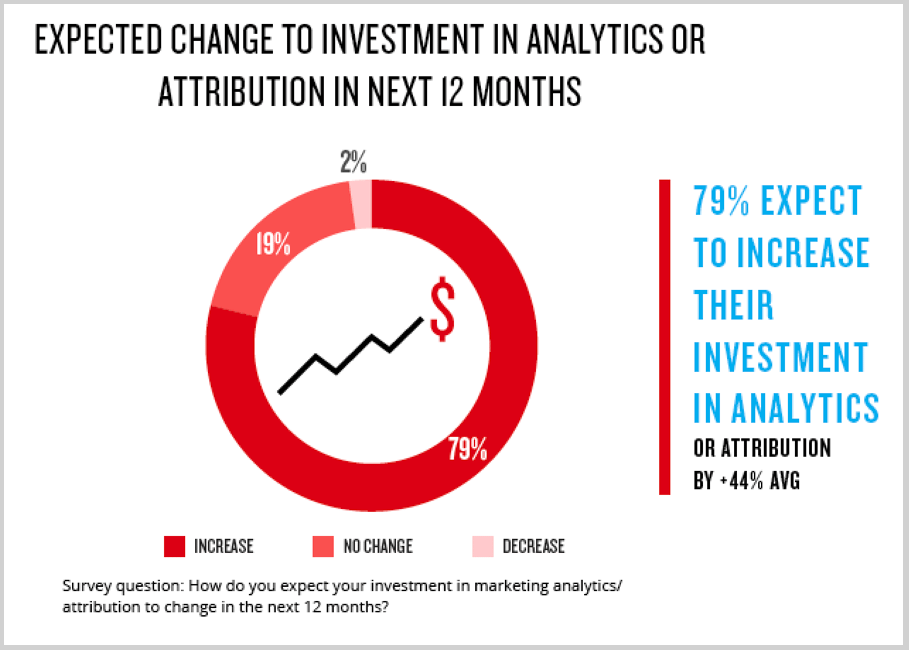 The answer is a resounding yes. A whopping 79% will increase investments in marketing analytics technology.

One CMO commented, “The industry trend is definitely moving quickly and irreversibly towards social media, digital, and personalization with an absolute requirement for data and analytics to understand the impact of money spent on media.”

This is the age of omnichannel strategies.

“Omni” means “of all things” or “in all ways or places.” So the word “omnichannel” means “all channels.” The word appears more than ten times in the CMO report.

Solomon focuses on the shift to omnichannel thinking in the report’s conclusion. He claims the report’s findings indicate advertisers are increasingly organizing themselves in a more channel-agnostic way with customers at the center of their strategy.

“Four years ago that was not the case for over 70% of companies,” he writes. “Now, nearly as many marketers (62%) reported being organized in a way that supports an omnichannel approach with unified reporting structures and revenue goals.”

The report concludes by claiming some are responding to the customer-first omnichannel reality and many others lag behind. It also points to two problems that remain prominent for CMOs who, above all, simply want to get what they pay for:

Tough stuff, no doubt. While everyone would like to find a simple solution on the menu, the menu of advertising channels and approaches for measuring them continues expanding.