Which 2020 Democratic candidates are capturing readers’ attention on the big issues?

“The economy, stupid.”  During the 1992 presidential election, an advisor to Bill Clinton used this phrase to keep the then-candidate focused on the issue he thought voters cared most about.

The strategy was successful and the phrase has since become iconic.

At Taboola, we see about 400 million article views per day in the US across our network of news publisher partners. This allows us to measure quite directly how the 2020 Democratic presidential candidates are connecting at the big issues of the day.

For our research, we looked at July 30th to August 28th, capturing the last round of debates and the weeks that followed.

We set a high bar to establish connections; specifically, we needed to see five articles in the time frame linking a candidate to an issue. Both the candidate and the issue needed to be specifically and prominently featured in an article for our semantic analysis AI to register a connection.

From this, we could see whose stances were making news that readers found compelling.

Healthcare was a major topic of the July debates with candidates like Bernie Sanders and Elizabeth Warren calling for a shift to a “Medicare for all” system, while others like Joe Biden and Kamala Harris called for plans that maintain a role for private insurance companies. 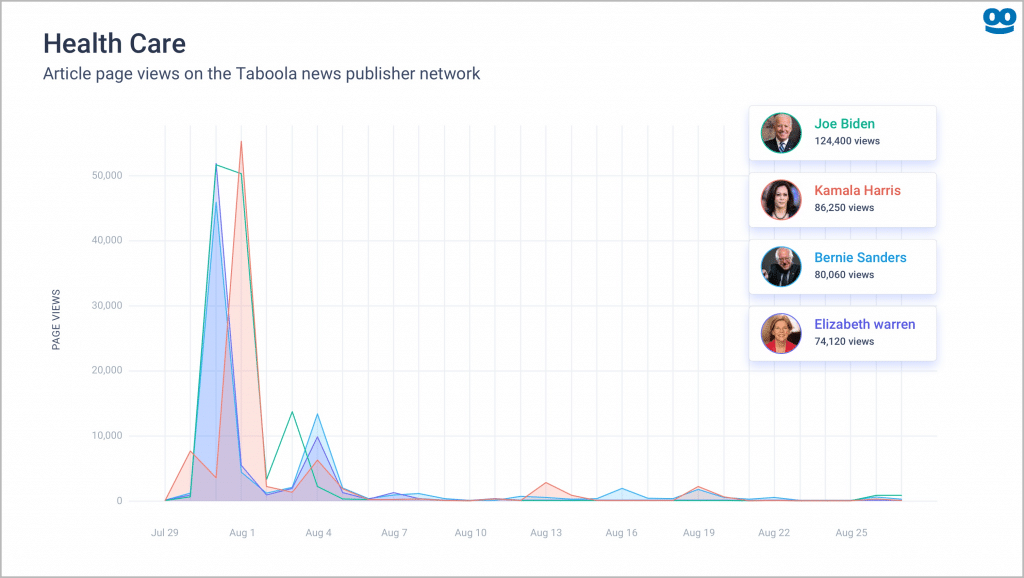 On climate change, Sanders and Harris were the only two candidates connected to the issue. Sanders had made news ahead of the debate for discussing climate in a video with Cardi B, and later in the month he released a $16 trillion proposal to address the issue. 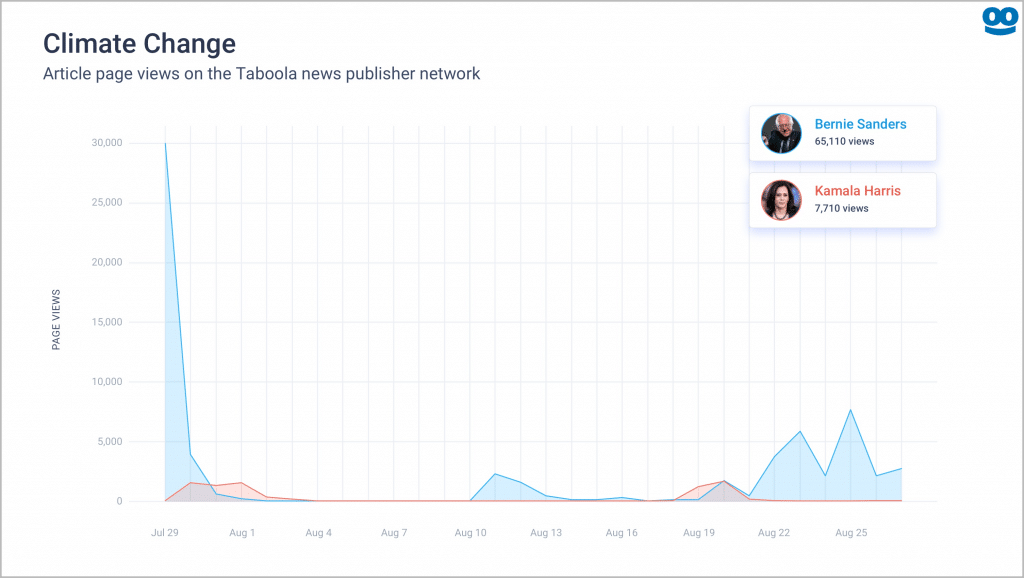 Unlike the other issues, there was no burst of activity around the debate connecting any candidates to calls for gun control. But after a mass shooting left 22 people dead in Beto O’Rourke’s home town of El Paso, Texas, the candidate refocused his campaign to make gun control a central issue. 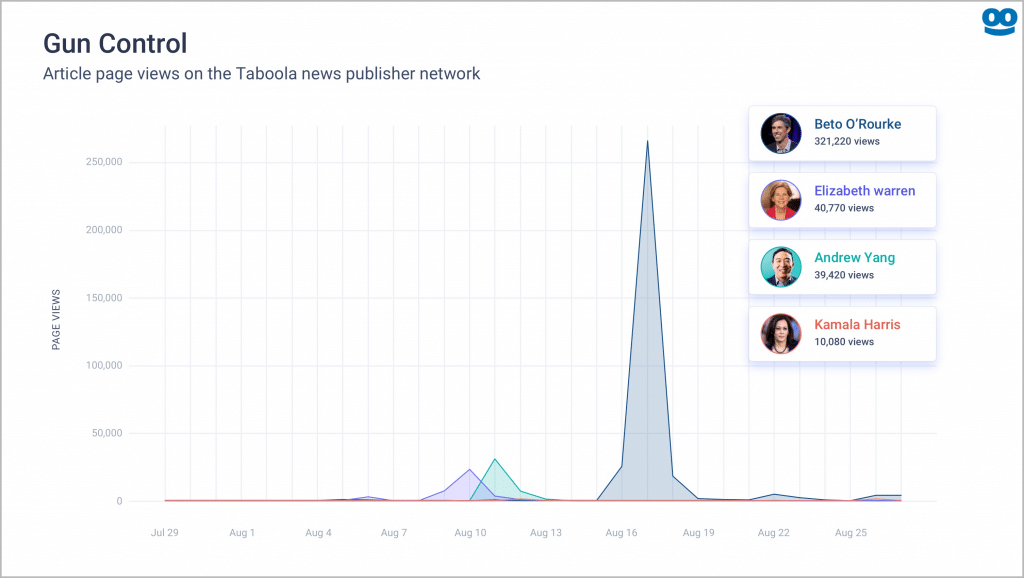 And what about our “the economy, stupid” maxim? Well, no Democratic candidate registered a connection to this issue. 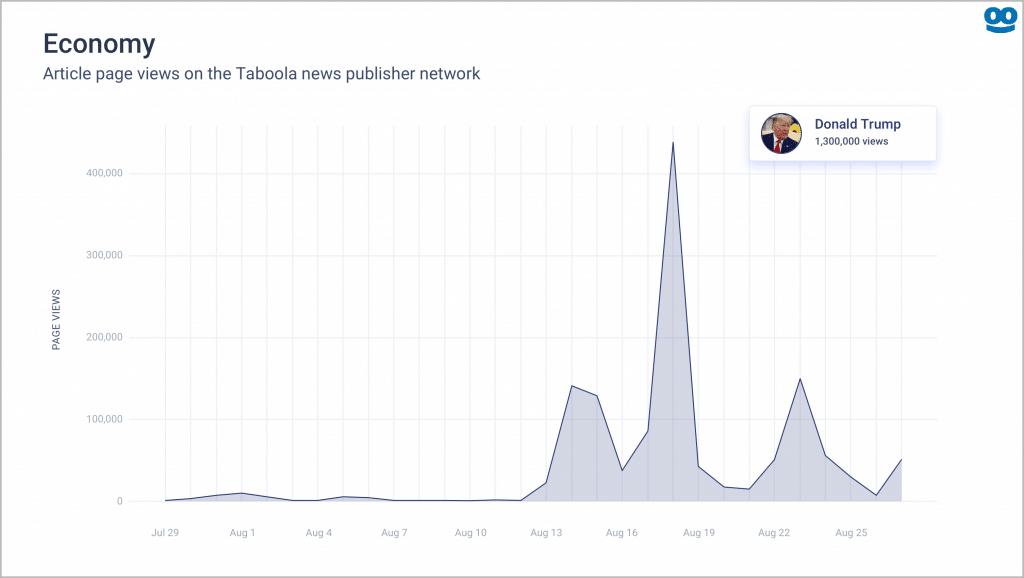 The economy seems to be an issue the president is hoping to own in 2020, but there’s a bit more to this data than meets the eye.

On Aug. 14, an economic indicator called an inverted yield curve signaled to market experts that the US economy could be headed for a downturn.

Trump responded by forcefully affirming the strength of the economy, which helps explain the significant increase in his connection to the issue in the latter half of August.

Our Economy is setting records on virtually every front – Probably the best our country has ever done. Tremendous value created since the Election. The World is respecting us again! Companies are moving back to the U.S.A.

We make data on what’s popular across our publisher network fully available at no cost to our publisher partners through Topic Insights, part of our Taboola Newsroom audience engagement platform. This is how it looks in action.

Beyond what’s available in Topic Insights, we’re always looking for interesting and useful ways our data can provide context on what’s happening in the world and how people are reading about it on news websites.

Feel free to tweet me (@franberkman) if you have any questions or thoughts about this data, or if you have ideas for future research.