We’re on a mission to improve user experience on the web—both in terms of the way content appears as well as what content appears. We spent 2017 focusing on removing “fake news” and deceptive ads, and our next step is to identify and remove what we believe are racy, and sexually suggestive. We’re going to start by removing 100,000 advertising URLs we’ve identified as ‘racy,’ which will represent a few million dollars of lost revenue in 2018, but it’s without a doubt, worth it.

18 months ago, we began our fight against fake news, adding a ban on cryptocurrency content towards the end of last year. This started with defining the difference between what is fake news and what is not, and identifying content that can potentially hurt people. We’ve made our policies public so that we can always be consistent and people can see where we draw the line, and how we enforce it strictly across our network.

Since our journey on fake news began, we’ve made important strides. We talk to journalists regularly, I put my email out there so anyone can contact me directly (I’ve placed it below on this article as well), we participate in panels with the likes of GE, and Mashable, and we have partnered with a number of industry groups including:

We also realized that to solve problems created by humans, you need humans—algorithms aren’t enough. We initiated a robust Content Policy department of 30 people that constantly reviews our entire network and is monitoring over a million new pieces of content a month, and our goal is to grow that team 50% in 2018.

I’m proud of these efforts, but I also realize it’s a journey, and we must continue to invest significant time and resources into discussing, evaluating and taking action where necessary.

At the beginning of this year, I blogged about brand safety being a priority for Taboola in 2018.  Also in January, eMarketer unveiled that of the topics related to brand safety that were most important to brands – chief among them was fake news (39%), followed by racy content (17%).

As we continue ongoing discussions in the industry and with our partners, we are taking into account what’s happening culturally as well. For me personally, as I became a father 4 months ago, I want my son to grow up in a world where the Open Web recognizes the value of everyone.

We have a responsibility to our readers. We’ve long held policies against sexually explicit content and we’re making those policies more strict as of today. 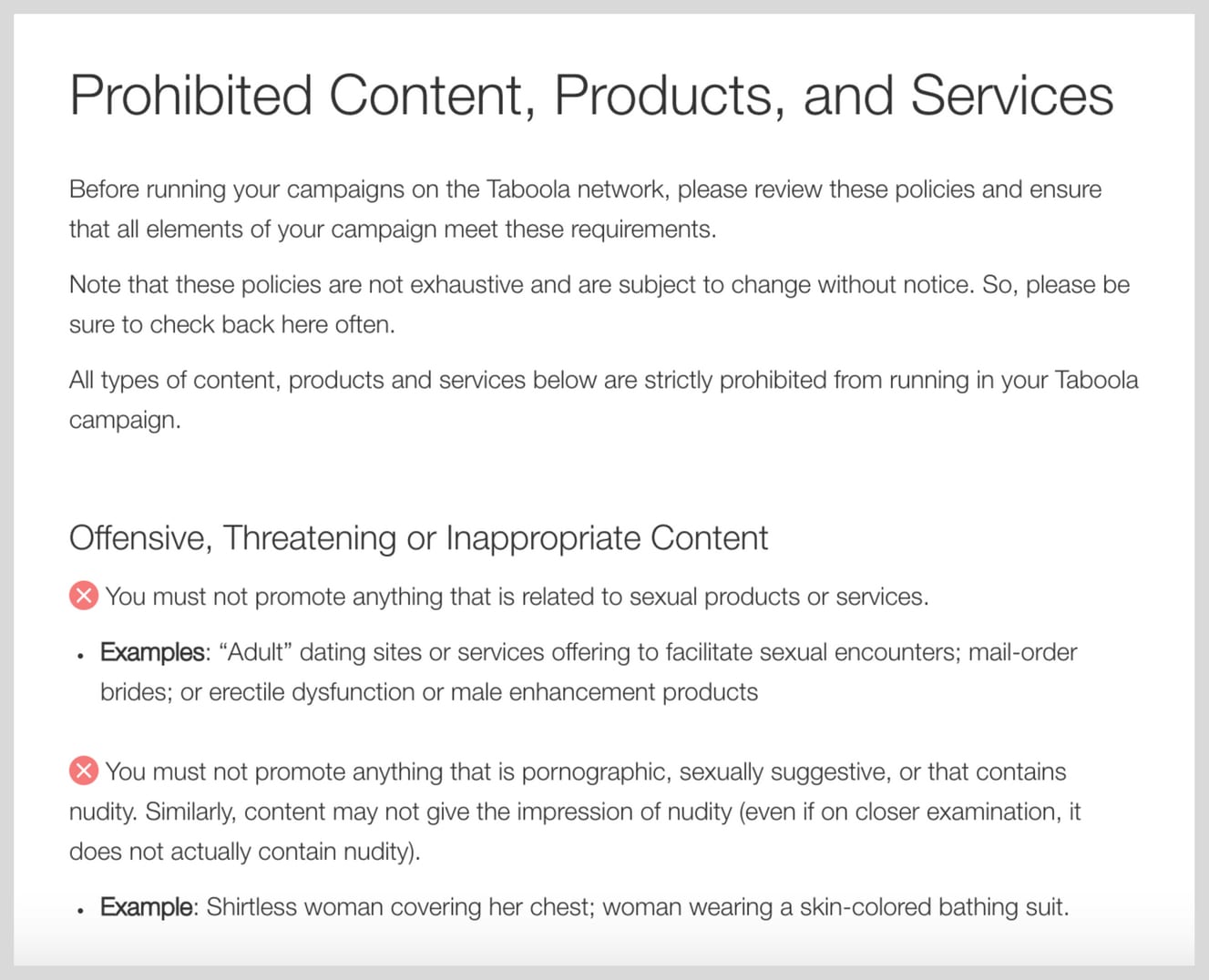 Reading online about how different sources define words like “pornography”, or “sexually explicit” illustrates the very problem we have. Some say, there is no clear definition of pornography—“you know it when you see it.”

There is an industry wide effort to clean up content. And we’re on board.

I speak a lot about the intentions behind a company and the difference between a story and a narrative. A story has beginning and an end but a narrative never ends. I compare it to a person’s soul, and while products change, and markets change – a company’s narrative or intention is forever.

Our intention is clear. We want users to discover information that can be useful and relevant to them, we want to help the open web grow, and give brands an alternative to walled gardens in a safe environment. It doesn’t mean we never make mistakes, but our intentions are clear and I’m proud of our team who are hard at work to create conversation, monitor for quality, and stay aligned with what matters to the future of journalism.

We’re removing 100,000 URLs from our network that we believe violate our policy. This effort represents a loss of a few million dollars a year, and it’s worth it. Here are some examples of images  that will not be approved moving forward:

We’re also revising “Taboola Choice,” by adding a new option called Racy so users around the world can flag things that they think should be removed. Getting the community involved is a big deal, and we’re fortunate to interact with more than a billion people a month to hopefully find every piece of content that should not be on the web.

As I’ve always stated with fake news, this journey is not easy, and it won’t be fixed overnight. As I’ve done with my other posts on important industry topics like this, I invite anyone who wants to have an open dialogue to reach out to me directly, anytime: adam.singolda@taboola.com.