You may have heard there’s an election happening.

Election Day is around the corner, and already voters are casting ballots to decide who will be the next President of the United States. But what information are they using to decide between Donald Trump and Joe Biden?

Our partnerships with many of the biggest publishers in the nation give us insight into a broad sample of what voters are reading on news websites.

Unsurprisingly, Trump’s current position of power and preternatural ability to attract the spotlight have combined to give him a large lead in the battle for attention.

But is that for better or worse this time around? Which issues are dominating the conversation? And where are readers most interested in Biden?

Let’s look at the data.

Now you see I wasn’t kidding about Trump’s ability to garner attention. In the 90-day period ending on Oct. 19, there have been nearly as many page views on news articles about Trump—about 2.3 billion—as all the rest of the major topics on this list combined.

Coronavirus was the dominant topic in terms of readership early this year, amassing over 9 billion page views in March through May, but readership fell off significantly since then. That being said, people are clearly hungry for any news they can get about a vaccine, which was also among the most popular topics.

The Supreme Court has also become a major topic of interest since the death of Ruth Bader Ginsberg in September has presented Trump with the opportunity to appoint a third justice.

Perhaps a sign of these times of unrest, kitchen table issues such as health care and the economy did not see as much readership as the social justice-focused Black Lives Matter movement or even the bizarre and insidious conspiracy theory QAnon that’s peddled by some of the most extreme Trump supporters.

That being said, let’s definitely keep in mind that readership data is not necessarily a reliable indicator of how important issues are to the electorate.

Millions of Americans are forced to cope with the coronavirus-damaged US economy and potential of losing health insurance every single day even if they aren’t voraciously consuming news articles about the topics.

Trump vs Biden: When Did Readership Spike?

We’ve seen the how much aspect of this data, but context matters. Looking into precisely when interest in the candidates broke through their baselines is revealing. 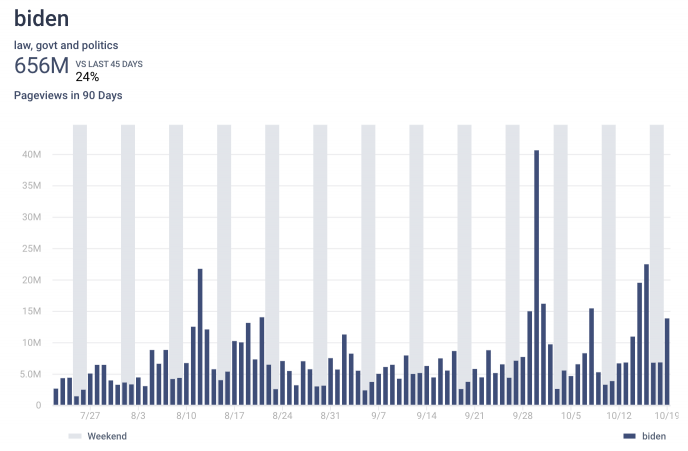 Biden’s biggest readership spike came on Sept. 30, the day after the first presidential debate. His next biggest spikes were on Oct. 16, the day after his ABC News town hall, and August 12, the day he announced Kamala Harris as his running mate.

For the most part, Biden was making news just around tentpole events and otherwise avoiding the spotlight, which many believe has been part of a “do no harm” strategy as he maintains a healthy lead in the polls. 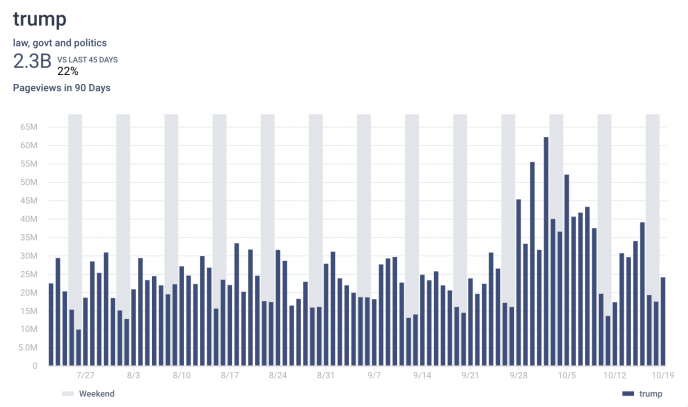 Trump’s biggest spike in readership came not the day after the debate, but several days later when he announced he’d tested positive for Covid-19 on Oct. 2, which sparked a frantic news cycle that lasted nearly a week.

Like Biden, Trump also got a bump from the debate on Sept. 30.

Trump’s next biggest moment came on Sept. 28, the morning after the New York Times published a bombshell investigation into his tax history that found he paid much less than would be expected for someone of his wealth due to massive business losses and aggressive use of deductions for supposed business expenses such as tens of thousands paid for hair styling, as well as a family vacation home.

The next dataset we analyzed was articles that mentioned either Trump or Biden (not both) in the headline from January through September, counting both the number of articles read and the amount of total page views—both separated by state.

Based on what we’ve seen already, you won’t be surprised to learn that there were more articles read and page views focusing on Trump in each and every state. When we look at page views per article, however, something interesting happens.

First and foremost, there is no state in which Biden articles got more readership on average than Trump articles.

And in states like Kansas, Wyoming and Arkansas, articles about Trump get up to 40 percent more page views than articles about Biden on average. So in addition to the fact that there’s more news about Trump in circulation, the articles out there are garnering much more interest.

Among the 20 states with the smallest differences in readership per article, however, there are 10 of the 13 states considered battleground states by Politico. 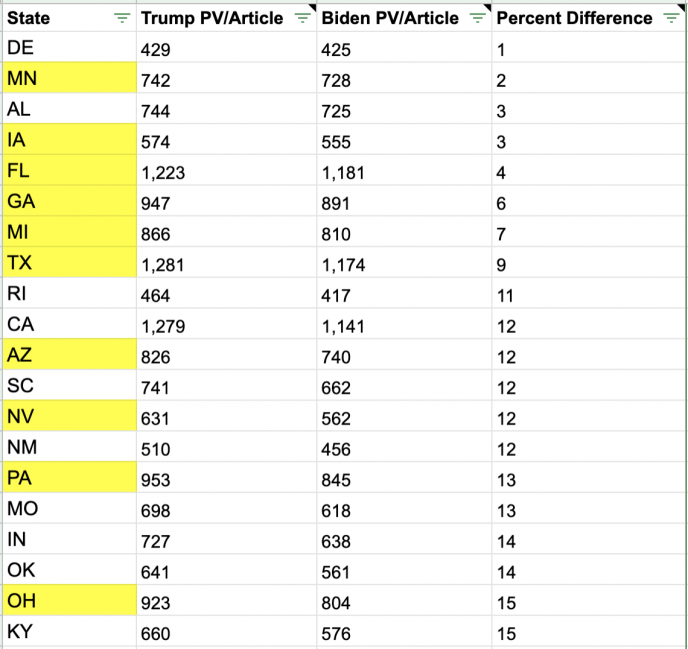 Biden’s home state of Delaware had the smallest difference in readership per article. Battleground states such as Minnesota, Iowa, Florida, Georgia, Michigan, and Texas were all in the single digits in terms of percent differential in page views per article.

This may indicate that voters in these states are giving Biden a closer look or at least have a more balanced appetite for news about the candidates.

How You Can View More Trending Topic Data 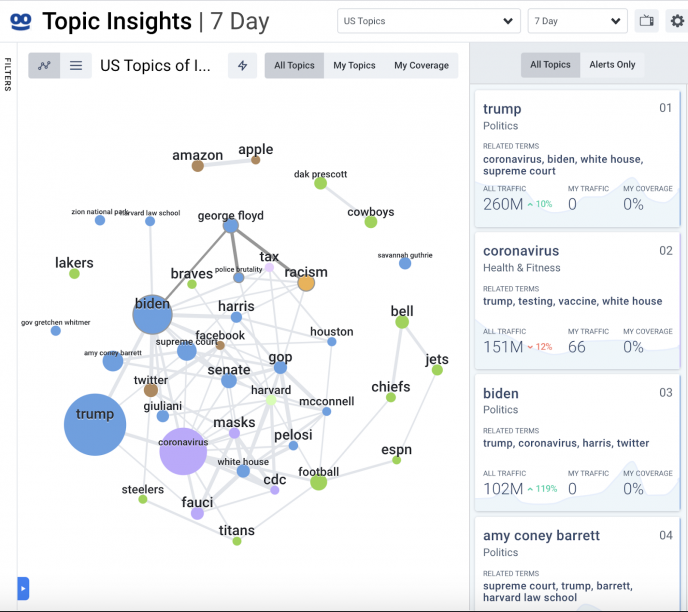 Our new tool Terms Explorer allows publishers to search for topics of interest and view data dating back 90 days. You can also overlay related topics to see when and how much topics intersected with one another. In the example below, page views about “vaccine” are overlaid in bright green onto the Terms Explorer chart for “Fauci.” 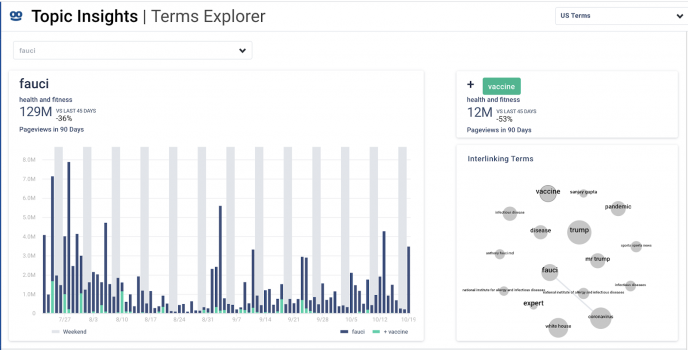 The 90-day page view Terms Explorer images for all topics discussed in the first part of this article are in this public folder.

If our topic data, politics or otherwise, can help with your research or reporting, please DM me on Twitter (@FranBerkman).