Halloween is back and bigger than ever, with the National Retail Federation (NRF) predicting 2022 holiday sales to reach $10.6 billion and look like pre-pandemic levels. With rising global interest in the silver screen and streaming services, Taboola was interested in looking at the shows and movies that are likely to inspire costumes this Halloween season – as well as what’s trending in other related categories like fall and Halloween treats. For publishers and advertisers, we’ll run through some last-minute ways to capitalize on the Halloween season.

Which Hollywood and streaming productions from 2022 are influencing global Halloween costumes this year?

Leading up to Halloween, Taboola collected and analyzed data in nine countries to predict popular costumes. Based on our findings, below are a few highlights:

The Surprising Lifespan of the Pumpkin Spice Latte

Over the past few years, there have been many changes in consumer interests – but one that has stayed the same is nationwide interest in pumpkin. Taboola Newsroom data shows that as of August 31st, “pumpkin” had a total of 4.6M pageviews in the U.S., and over the past 45 days, it has caused a 6,440% spike in readership. 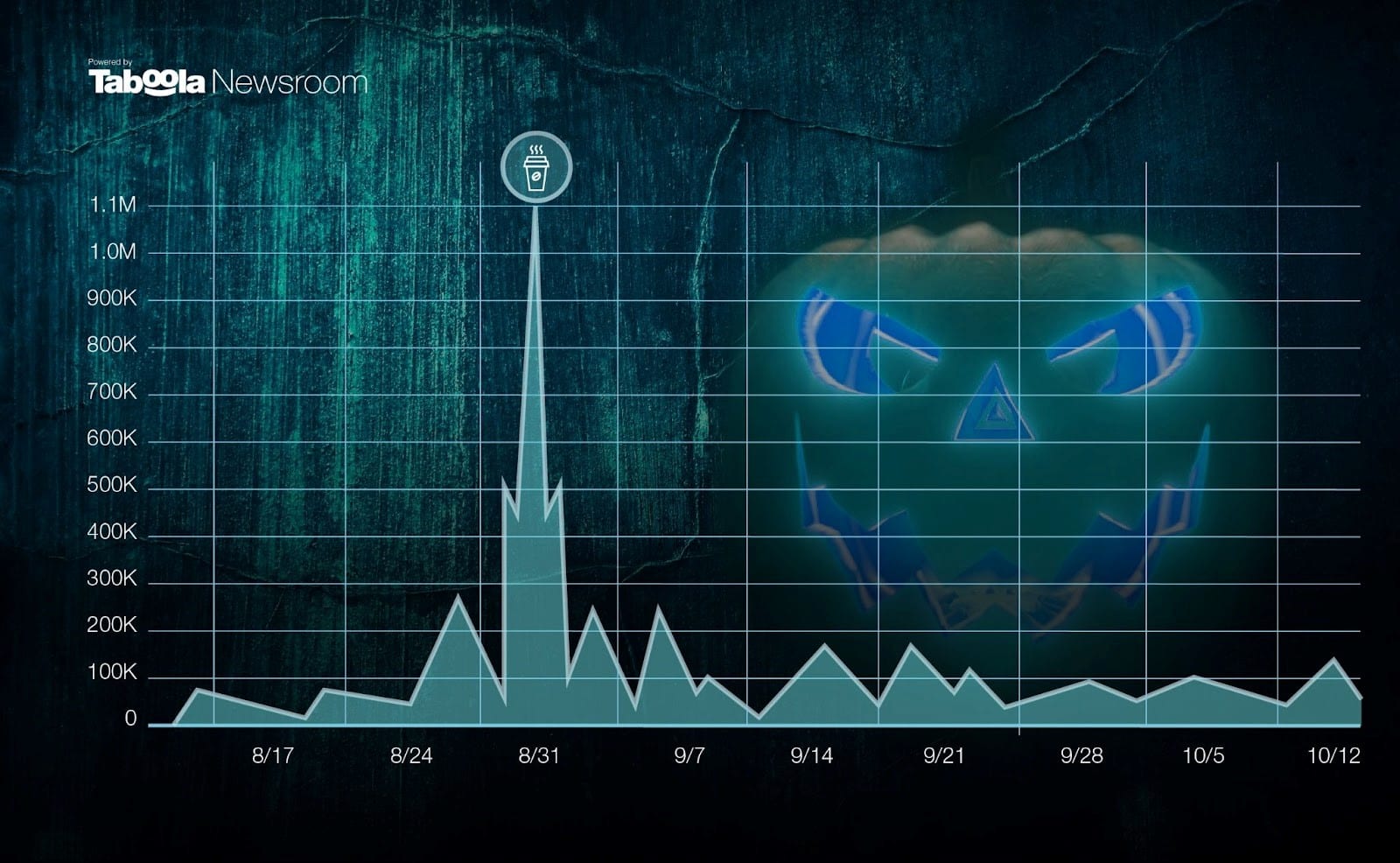 People start reading about pumpkins so early that some may consider the timing a bit unsettling – especially since readership has been seen to start increasing in the summertime. “Pumpkin” received the most readership activity on August 30, the day Starbucks released its pumpkin spice latte.

For advertisers, there’s one key takeaway: interest in the beverage is continuing to surface earlier in the year, but PSL enthusiasm is present throughout the year. We see readership continue to spike for “pumpkin” in September and October, which will likely continue throughout the rest of Q4.

There’s no doubt that we all have a sweet spot for a piece of candy every now and then. This year, we were interested in seeing whether or not consumers are leaning towards fruity or chocolate candy.

Skittles came in as the clear winner, but to us, you simply can’t go wrong with any of these basket fillers.

Based on our data, we advise entertainment publishers to resurface content about the shows that are being read about most often. Even if those shows are currently in “off” seasons like Stranger Things, our research shows there is still an appetite for the show, actors and monsters involved.

We recommend retailers and e-commerce shops to prioritize featuring costumes associated with these shows in their campaigns, website landing pages and social copy for last-minute shoppers. Halloween spending for 2022 is set to top last year’s total, so prioritize pushing out Halloween-related campaigns up until the 31st in order to target any stragglers.

PSL season isn’t going anywhere anytime soon, as it blends into Thanksgiving and even December holidays. For this reason, food publishers should make sure they’re including pumpkin-based foods and drinks within any upcoming holiday lists. Another idea? Consider a recap of pumpkin-themed recipes to close out winter coverage.

Lastly, QSR and dining brands should consider extending pumpkin spice promotions into the fall and keep pumpkin-related items in campaigns through the end of the year.