Football, Food, and Famous Guests: The Big Game Topics Everyone is Reading About

It’s the time of year again when the regular football season yields two contenders to battle it out for the title of champion.

Of course, the big day is about football, but anyone who’s ever tuned in (all 193.8 million of them!) knows there’s much more to it than that. The renowned commercials, delectable snack spreads, and highly-anticipated halftime performers have become synonymous with the big game. This year, those watching are expected to spend a collective $17.2 billion in preparation for the day, further marking it more than just a sporting event, but a high-opportunity consumer event as well.

To find out the MVPs of online readership among these football-and-more game day categories, we took a look at the data. 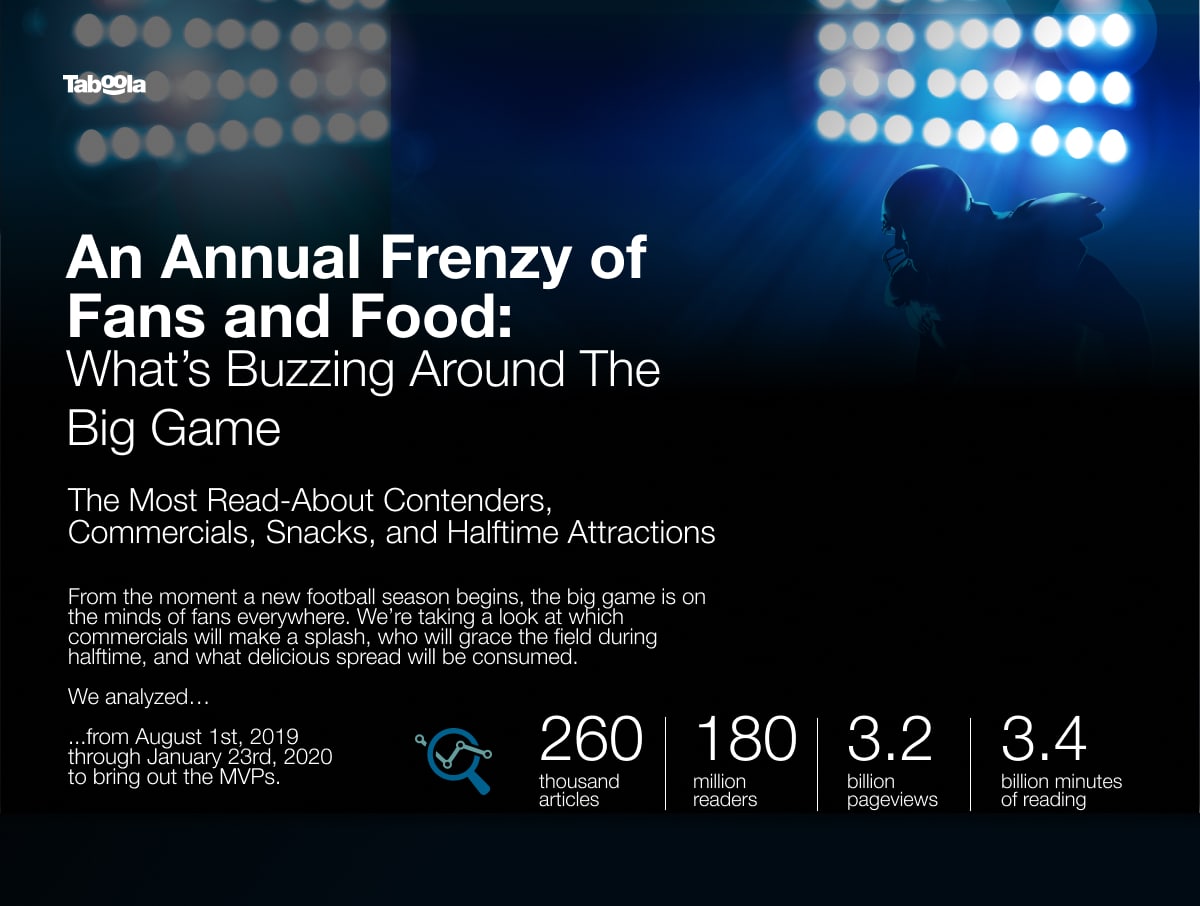 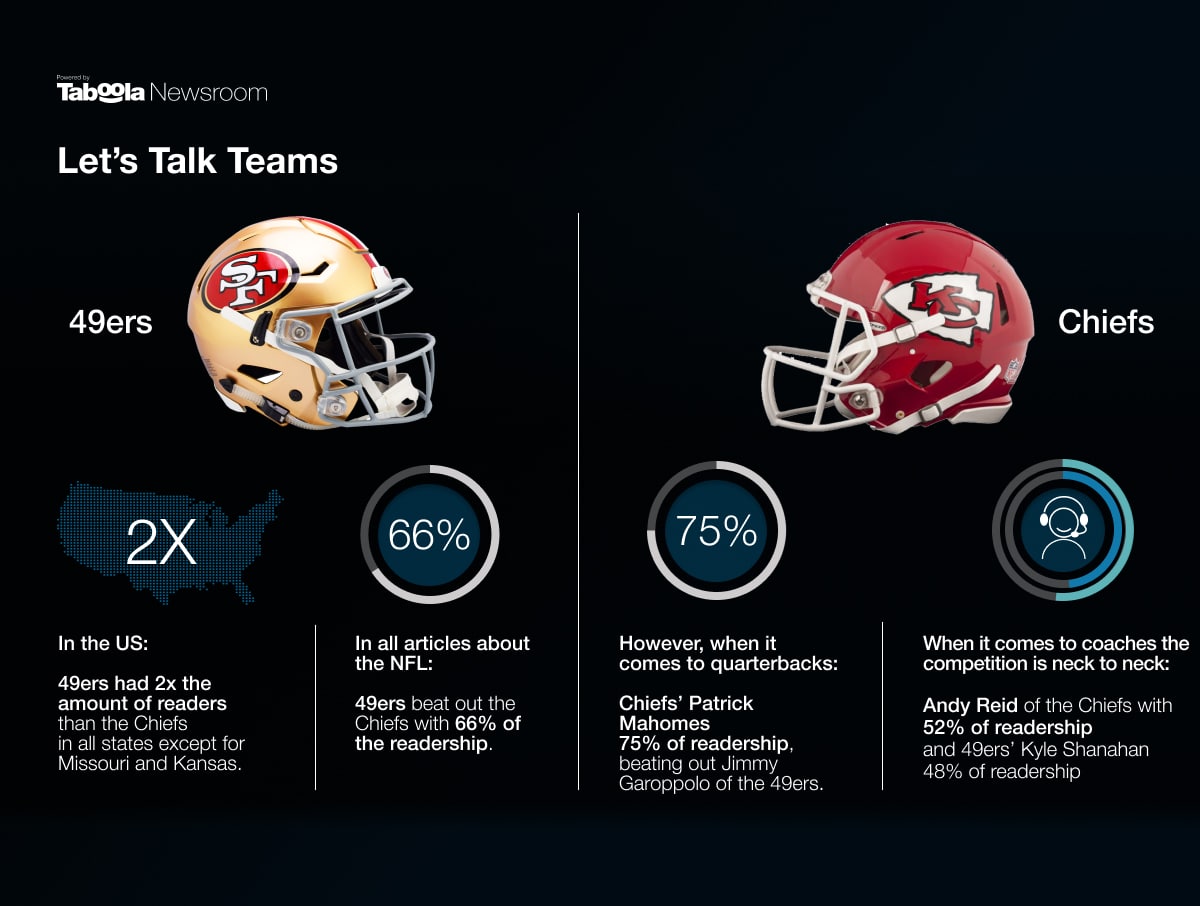 In 48 of the 50 United States, the San Francisco 49ers saw two times the readership that the Kansas City chiefs did.

In total NFL articles, the 49ers made off with two thirds of the readership, except for when the reading material was about quarterbacks. The Chiefs’ Patrick Mahomes beat out the 49ers’ Jimmy Garoppolo there.

As far as coaches were concerned, both teams’ leaders split the readership almost in half.

When during the NFL season did the buzz begin? 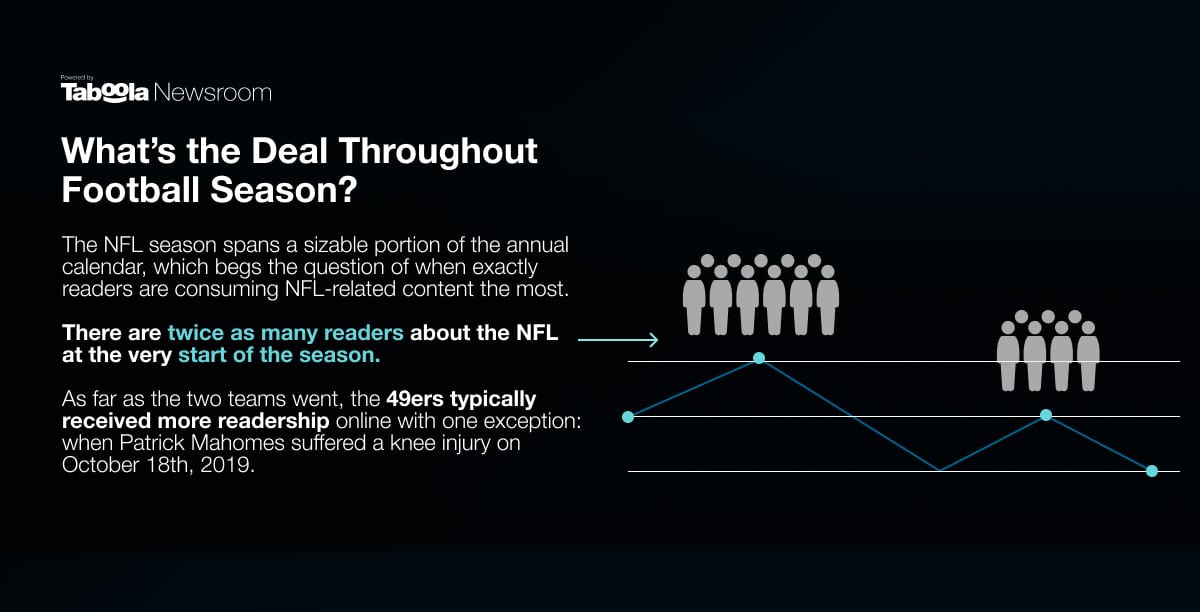 Given the magnitude of the big game, it’s surprising to learn that the majority of readership around NFL-related content actually spikes right at the start of the season.

Taking a look at how the two final teams’ readerships performed throughout the season as a whole, the 49ers remained a steady frontrunner, except when Patrick Mahomes suffered a knee injury in October of 2019.

Fandom at its finest 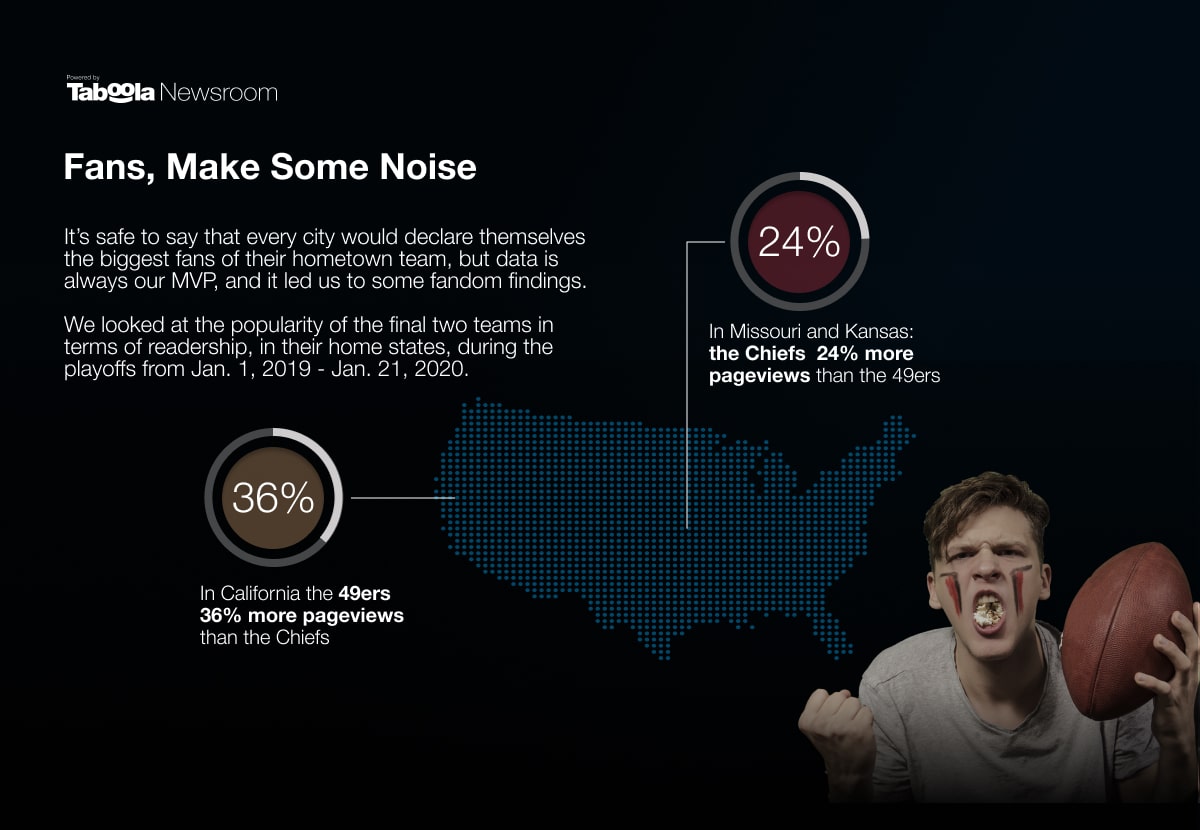 In the month leading up to the big game, the Chiefs saw 24% more pageviews than the 49ers in Missouri and Kansas. In California, the 49ers took a 36% pageview lead over the Chiefs. So, which team has the more dedicated fanbase? That’s one debate we’ll try and stay out of.

It wouldn’t be game day without the snack commercials 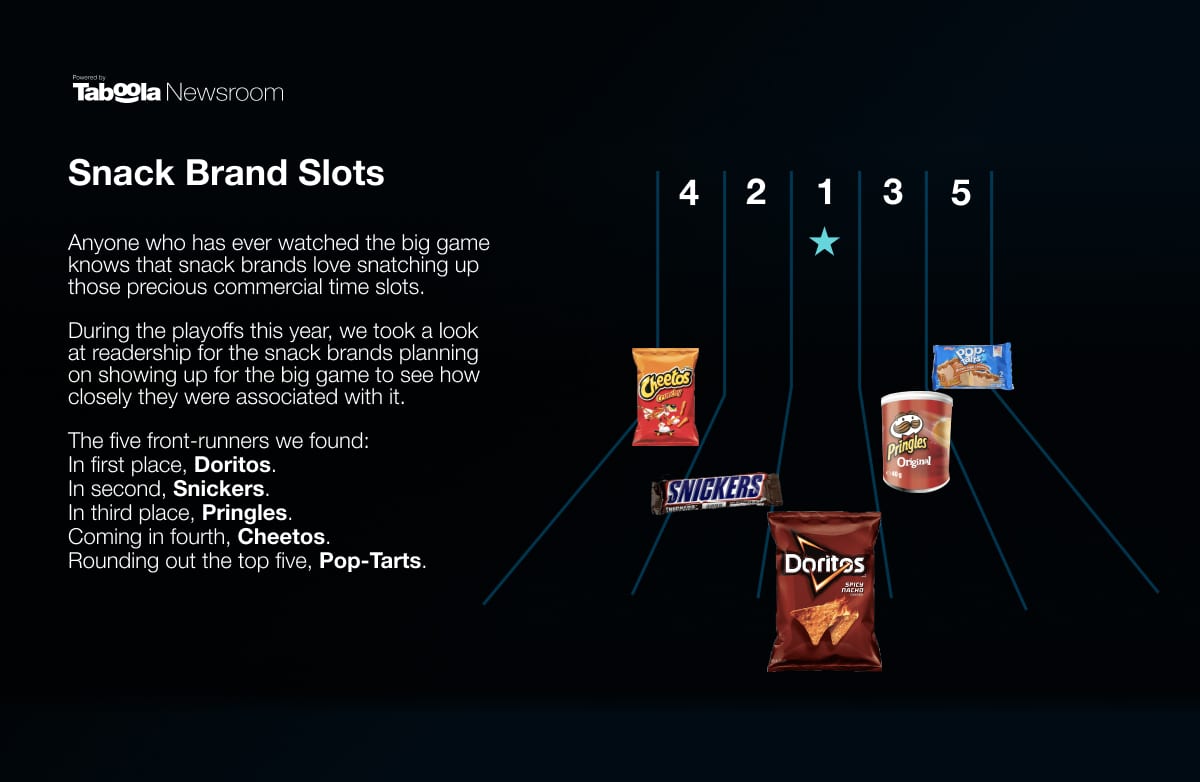 While munching and crunching on treats of their own, viewers of the big game see plenty of snack-related advertisements.

This year, Doritos has been generating the most online buzz around their association with the broadcast, followed by Snickers, Pringles, Cheetos, and Pop-Tarts. A savory game day it will be.

Who’s taking the stage (and the readership)

Before Jennifer Lopez and Shakira will take the stage in Miami, we took a look at which of the two of them has generated the most buzz.

J.Lo was a clear winner here with 71.1% of the readership, but we have no doubt they’ll both dazzle mid-game.

The beloved foods you can expect to see 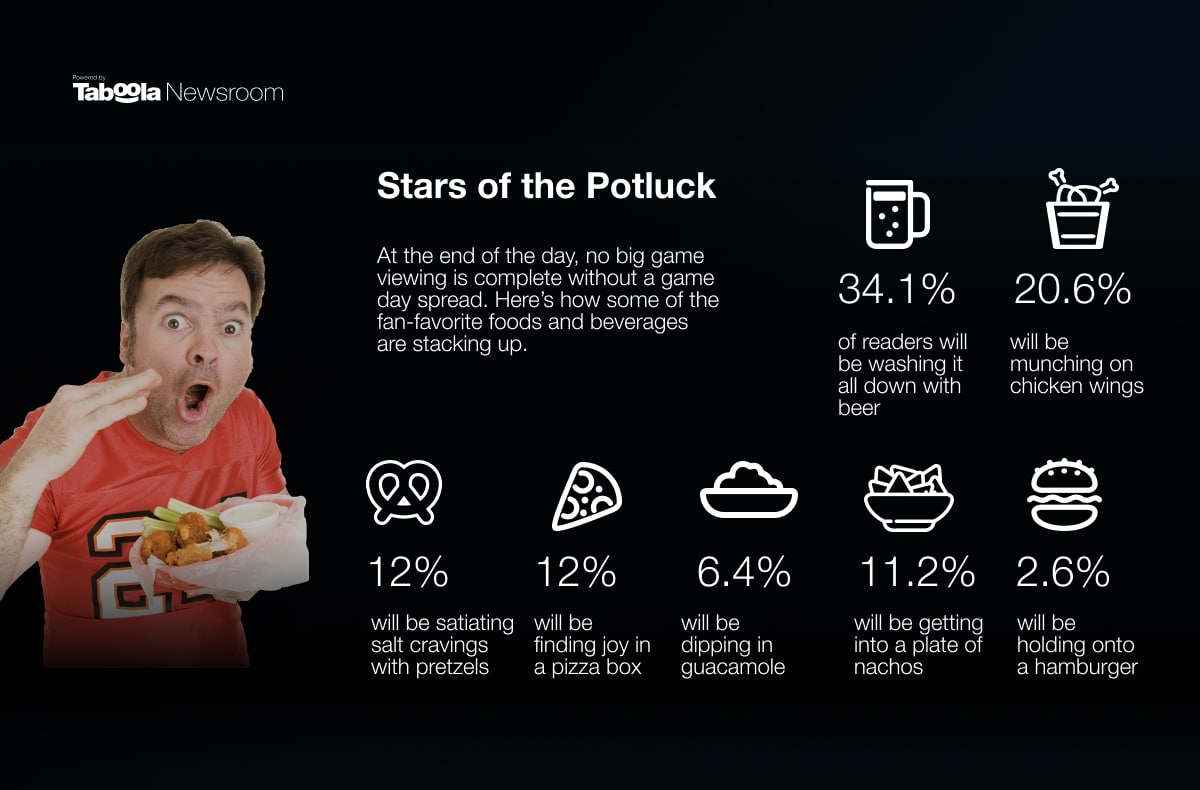 Anyone who’s been to a gathering to watch a big football game knows about the usual food suspects. It’s a day where carbs rule supreme and food is meant to be handheld.

Among the frontrunners this year, beer is in the top slot with chicken wings following close behind. Pretzels and pizza tied for a salty third, and nachos are right on their tails. Rounding out the top eight are guacamole, hamburgers, and tacos respectively, ensuring plenty of dips, big bites, and messy napkins. 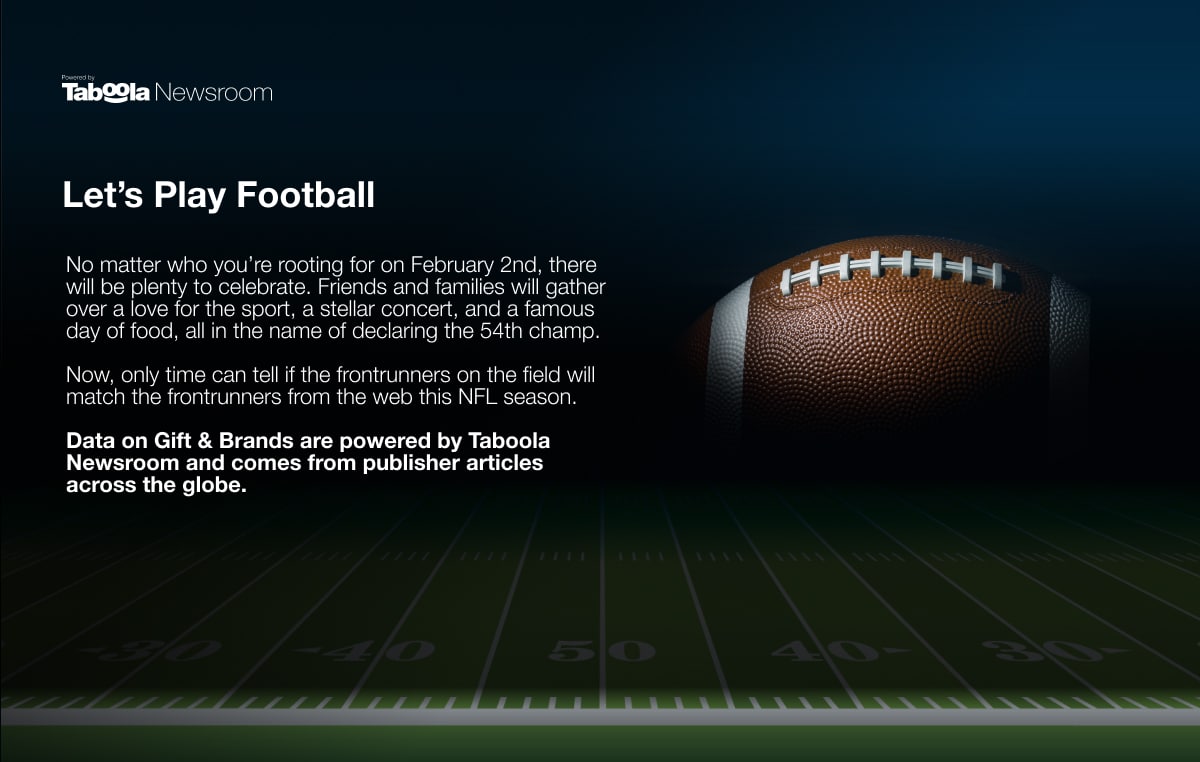 Just like that, another big game day is around the corner. We’ve covered the teams, the fans, the commercials, the halftime show, and the food––what more could you need?

Whether you’re rooting for a hometown team, cracking open a drink and a pizza box, or just enjoying the company of family and friends, it’s sure to be a game for the books.

Our pick for the big winner of the day? The data, of course.