Digital ad spending continues to rise. Here’s the low down:

These are the conclusions of the global Digital Ad Spending 2019 report from eMarketer. Let’s dig into it now. 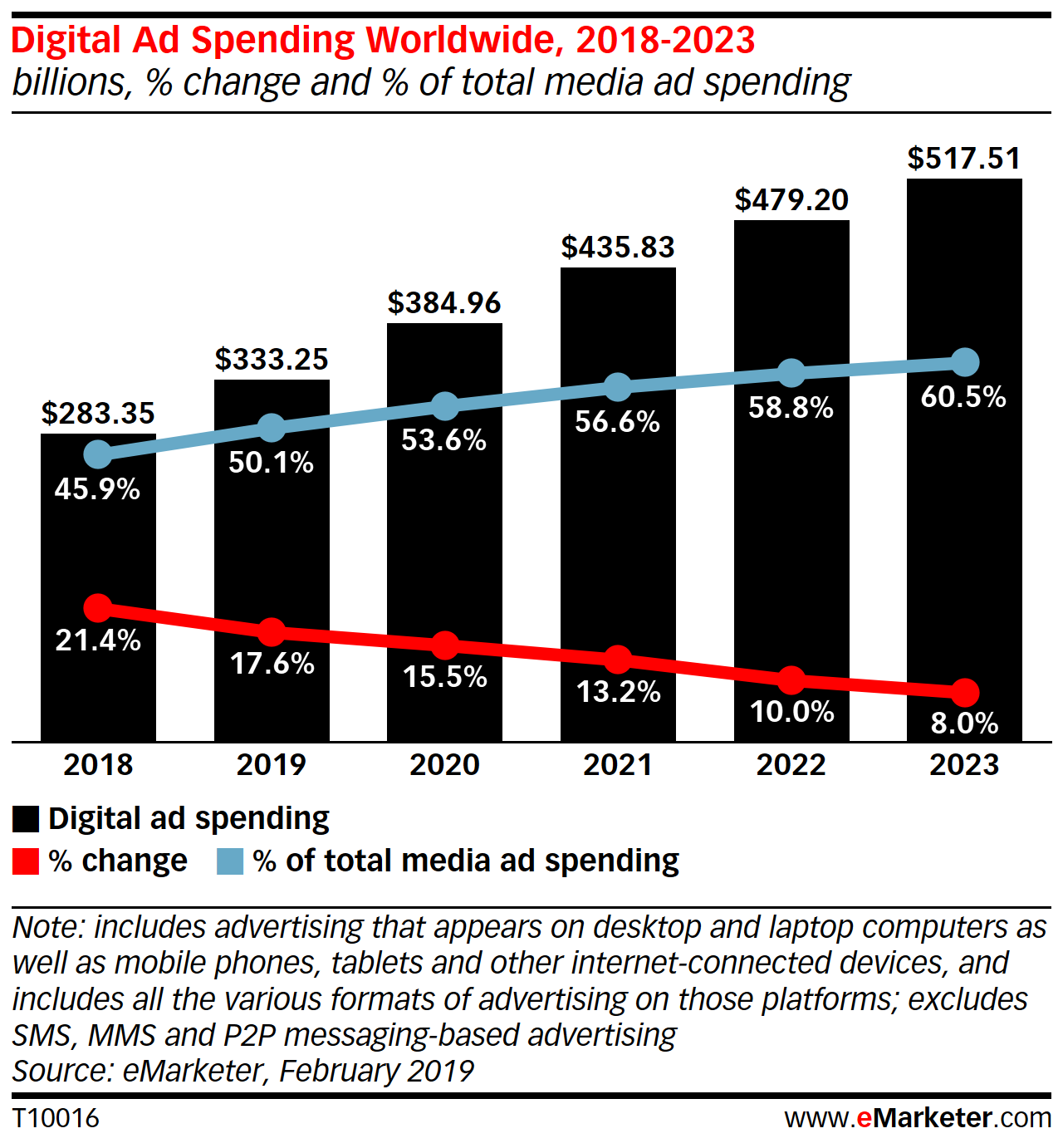 2019 is the tipping point year for digital ad spend

eMarketer data reports ad spending will rise this year and the four consecutive years following it, with digital grabbing a slightly bigger share each year.

Interestingly, the U.S. lags behind seven other countries for digital ad spend. The report forecasts that China and the U.K. will have the most marked ratios, spending 69.5% and 66.4% respectively on digital during 2019.

Which companies are raking in the business?

No big surprise here: Google remains the largest seller of digital ads, accounting for 31% of the total, according to eMarketer, as of February 2019. Facebook is second and China-based Alibaba is a distant third. 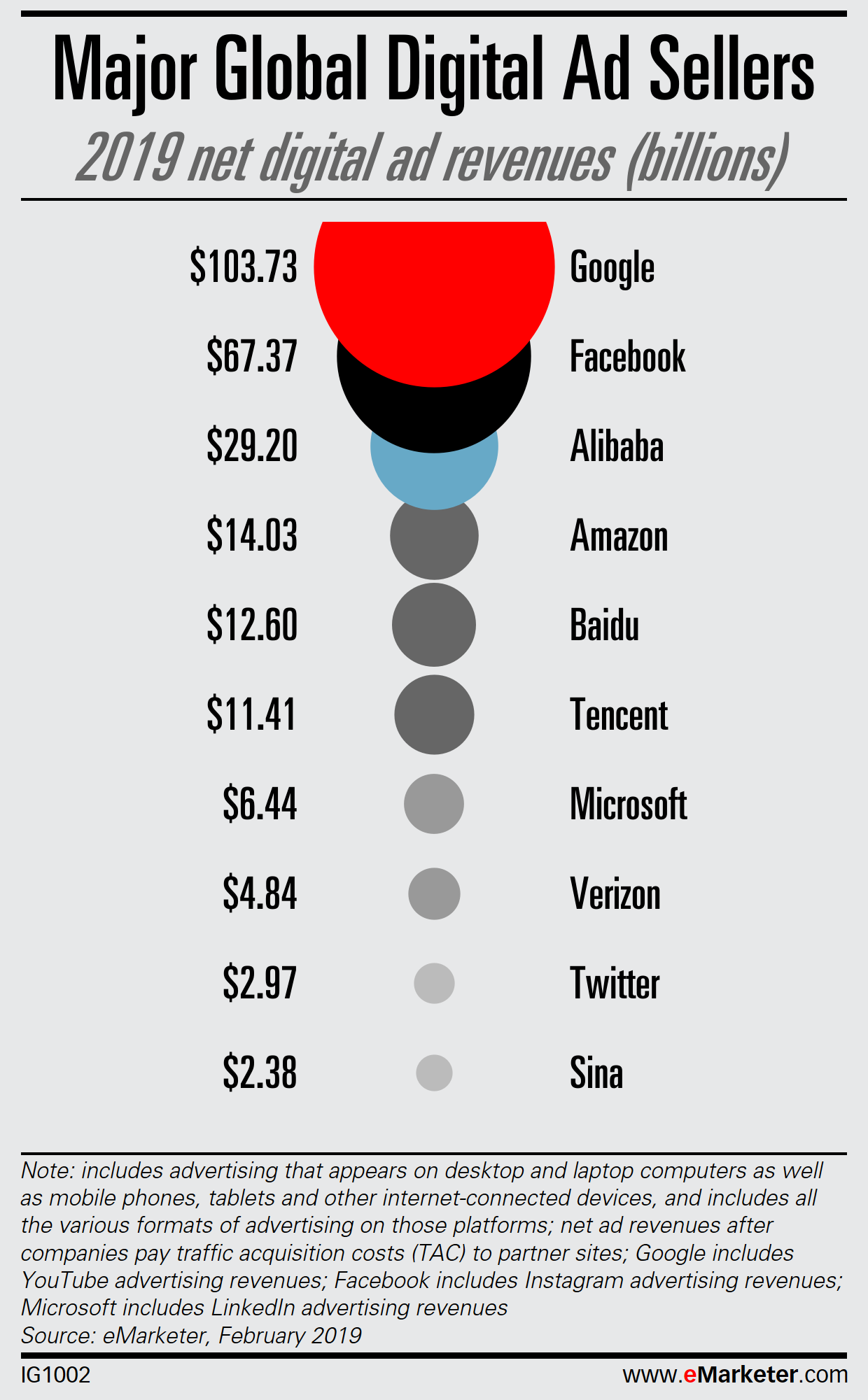 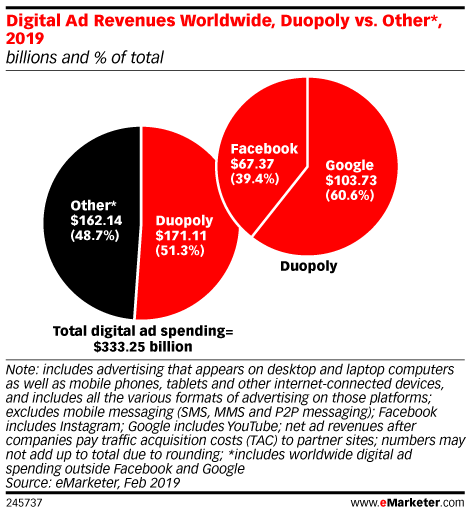 As illustrated above, eMarketer labels Google and Facebook the ‘duopoly’ and it reports that its combined $171-billion revenues represents the majority of digital ad revenues across all channels. Instagram is a big contributor to the impressive growth of Facebook’s advertising revenue.

But is Amazon the story here?

Yes and no. While Amazon’s far from the largest earner of ad dollars, it’s the number one destination for e-commerce and, as the report says, “the primary product search engine.”

As such, Amazon’s ascent in terms of ad revenues is impressive. 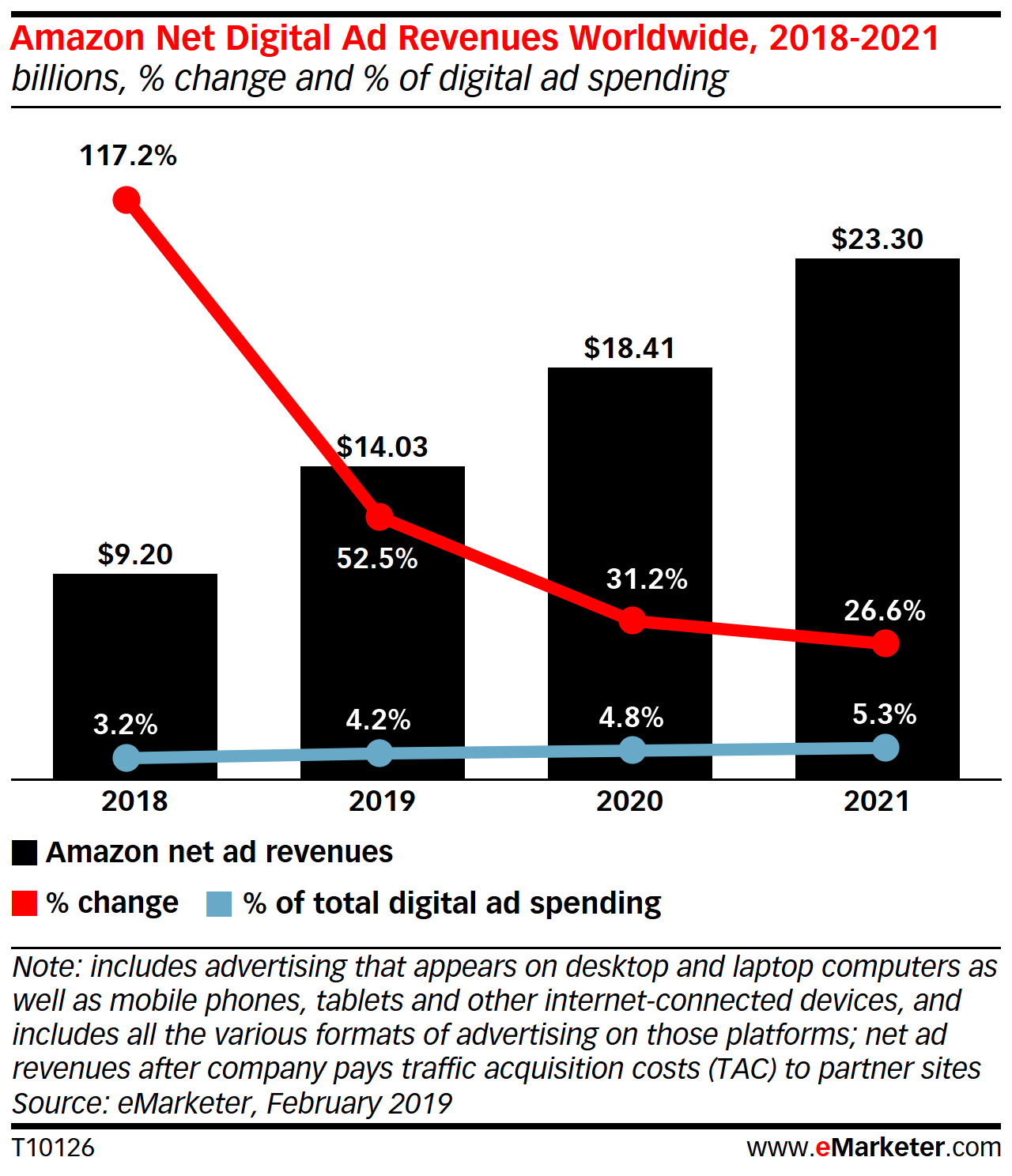 The study projects that Amazon’s worldwide net ad revenues will grow by 52.5% to $14.03 billion this year. While growth will cool in 2020 and 2021, ad revenues will climb by billions each year.

Or is e-commerce the story? 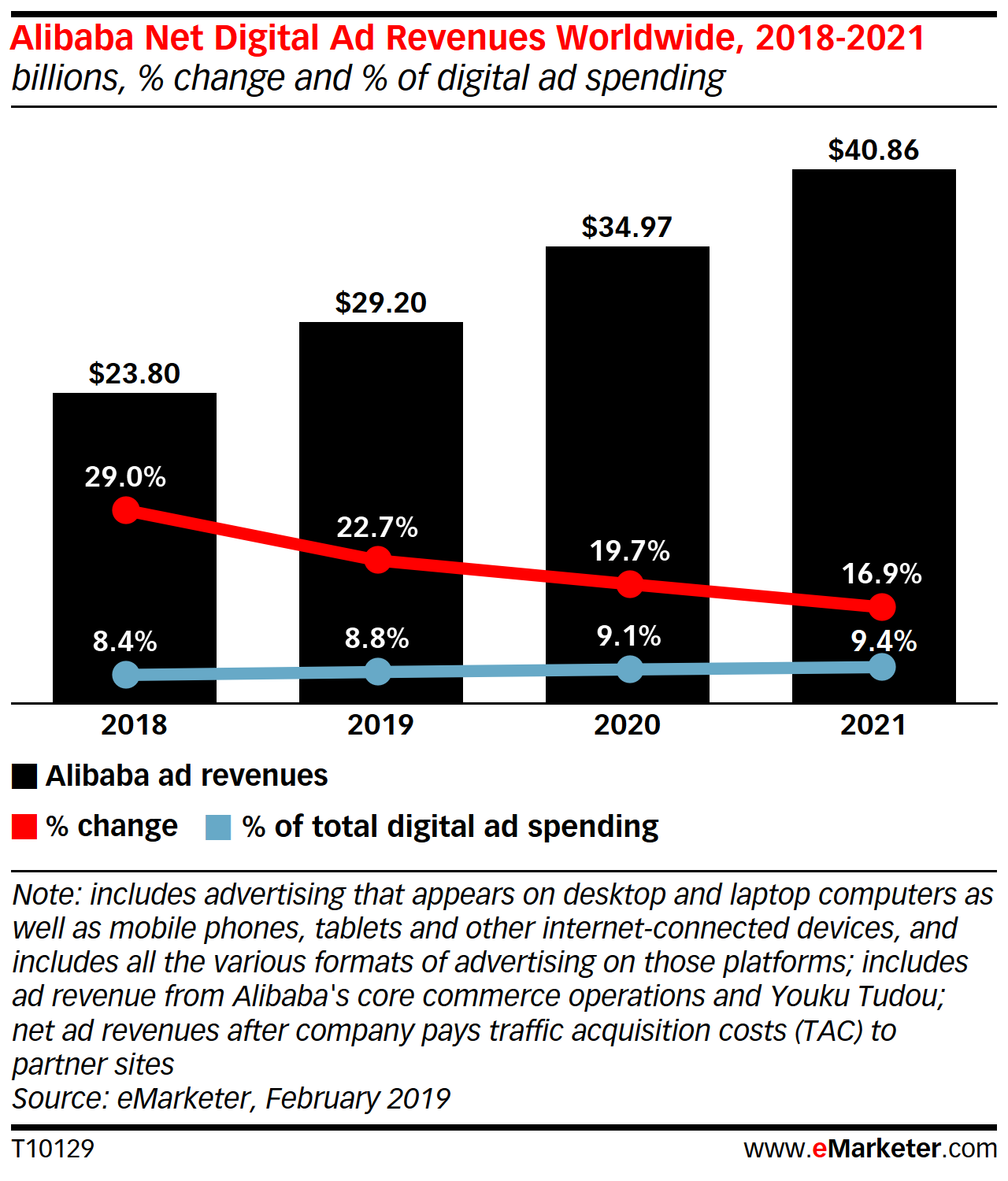 eMarketer claims that the success enjoyed by Alibaba and Amazon signals the continued growth of other e-commerce players in the digital ad spend arena, including Walmart, eBay and China’s JD.com. Watch this space, as they say.

eMarketer commits a portion of its report to what it calls “cross-channel coordination.”

The report’s author, Jasmine Enberg, writes: “The continuing shift toward digital advertising doesn’t mean that traditional channels will be neglected in 2019. In fact, advertisers across the globe are beginning to strategize how to effectively leverage both traditional and digital advertising and more closely mirror how their audiences consume media.”

She sees the path to cross-channel coordination, however, as a serious challenge. Dipping into a Salesforce study, she reveals an average of 28% of marketers worldwide identify websites, mobile apps and video advertising – common channels for ad messages – as “siloed” at their organizations.

Salesforce did find the average share of marketers who said they dynamically coordinated messages across channels was up slightly from last year, however, and advertisers are actively working towards achieving greater coordination across channels.

As we’ve shared with you before, native advertising now accounts for more than half of all digital display spending by U.S. marketers. Of course, paid search and paid social advertising also qualifies as native, but in most cases, it’s not ‘display’ advertising.

The distinction we want to make is this: both Google and Facebook are ‘walled gardens’ or closed media ecosystems. This post covers the limitations of investing only in walled gardens — and the potentially large costs of doing so. It stresses that native advertising earns ten times more click-through-rates (CTR) and enables advertisers to more easily scale to reach a larger audience.

Don’t take this to mean your ad dollars go to waste on Google and Facebook. Walled or not, $171-billion suggests advertisers are finding value in their investments on the two channels. When return on investment (ROI), scale and cross-channel coordination are amongst your priorities, however, native advertising in the form of content discovery, is a viable option worth trying.