8 Newsworthy Podcast Moments that Cut Through the Noise

Podcasts are booming in popularity in recent years.

There’s no shortage of surveys showing that both production and consumption of the medium continue to climb. But if more people are listening to podcasts, does that also mean more people are reading about them?

It turns out, the answer is yes!

Surveying the topic’s popularity on our network of news partner websites, we found unsteady yet significant growth in readership since 2017. Articles about podcasts saw 16% year-over-year growth in 2018 and another 19% growth looking at the monthly average for 2019 thus far compared to 2018.

With over 1,300 publications in the US, including national, local, and digital-native news organizations, our publisher network is one of the most broad views available of what topics people are reading about on news websites.

Intuitively, it makes sense that podcast listenership and readership have increased in tandem.

Many news outlets also produce some of the most popular podcasts, and they often create articles to promote and summarize episodes. Another byproduct of the increased popularity is increased news coverage of the trend, both as a societal phenomenon and as an entertainment source.

But looking at daily readership about podcasts instead of monthly reveals something unexpected. Yes, the base level of readership has significantly increased in 2019. But many of the biggest individual days in terms of readership occurred in 2017 and 2018. 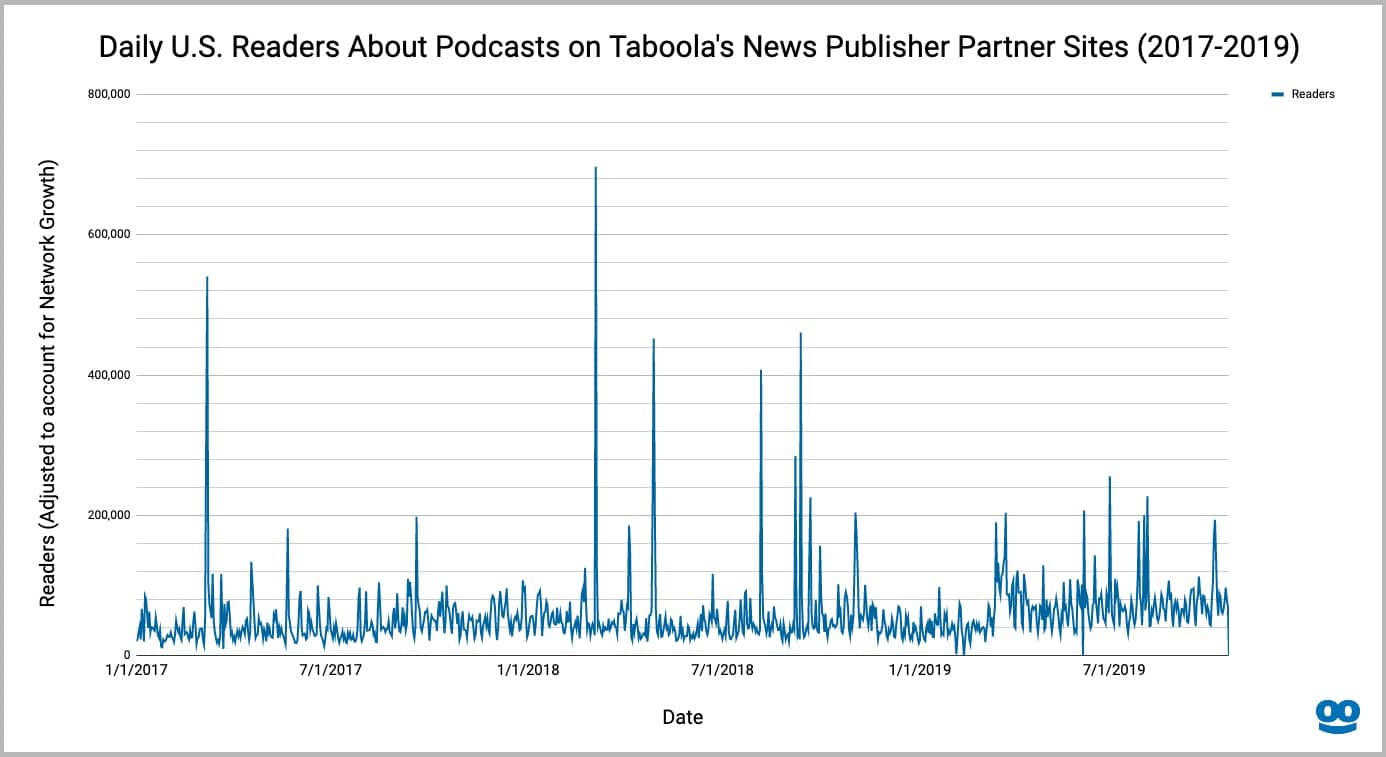 We decided to investigate these spikes and create a timeline of instances when news related to podcasts cut through the noise.

The podcast Missing Richard Simmons debuted in mid February. By early March, it was a sensation.

Host Dan Taberski spends the podcast’s 6 episodes investigating the sudden retreat from public view of Simmons, the fitness guru known for his uplifting message. The program was criticized as “morally suspect” and called a “privacy invasion.” Taberski defended himself against the allegations in an interview with ABC News published March 7, 2017.

“This isn’t a witch hunt, I just want to wish him well. I haven’t talked to anybody who thinks Richard Simmons is fine,” he said.

The next breakthrough podcast news moment came a year later. A middle school located north of Tampa, Fla., removed one of its teachers from the classroom after reports that she was the host of a podcast featuring racist discourse.

HuffPost broke the story on March 3, and the Crystal River Middle School took action on March 5, the day when we saw the biggest spike in readership about podcasts.

This is the one significant spike in daily podcast readership that we had a hard time connecting to a news event. Apple announced its podcast app had reached 50 billion downloads and streams around the time of the spike, though the amount of press coverage doesn’t seem to match the spike in readership we saw.

News of the Golden State killer’s arrest also broke this week. True crime and is one of the most popular podcast topics, so it’s possible that may have generated some interest.

Apple started a cascade effect when it made the call to remove podcasts made by conspiracy theorist and Infowars founder Alex Jones. Facebook, YouTube, and Spotify followed suit by removing Infowars podcasts and other content.

What happens when you put a provocative interviewer and a billionaire without a filter in the same room? We learned the answer when Elon Musk appeared on the ultra-popular podcast The Joe Rogan Experience.

The two shared a joint and sipped whiskey while discussing everything from Tesla’s stock prices to Musk’s Twitter controversies to futuristic technology. Musk showed Rogan his flamethrower. Rogan showed Musk his Samurai sword.

The episode was streamed on YouTube and images quickly spread.

Several newsworthy industry events transpired over what Nieman Lab’s Joshua Benton described as “a tumultuous 24 hours in the podcast business!” To summarize:

The original season of Serial, launched in 2014, was undoubtedly one of the most popular and beloved podcasts of all time. When it returned for a third season, readers took notice.

Instead of focusing on one particular case like in seasons 1 and 2, season 3 chronicled months spent at the Cleveland justice center, as hosts Sarah Koenig and Emmanuel Dzotsi attempted to shed light on the harsh everyday realities of the US criminal justice system.

Coincidentally, the criminal justice system launched its own podcast on that very same day. California’s Newport Beach police announced a six-part series called “Countdown to Capture,” aimed at helping them track down a murder suspect.

Nov 2, 2018: Julia Roberts stars in Homecoming based on the Gimlet Media podcast

In a very cool milestone for the podcast industry, Julia Roberts — whose star power has basically always been reserved for Hollywood films — played the lead in Homecoming, a TV series based on podcast. Mr. Robot creator Sam Esmail directed the show, which aired on Amazon Prime. The story was based on a podcast of the same name that Gimlet Media released in 2016.

As you can see in the chart above, readership about podcasts has grown substantially in 2019. Though we haven’t seen the same huge spikes in readership, the daily baseline has grown — particularly during and since March. Here’s a sampling of some of the articles that have driven this readership:

How you can view our trending topic data

Taboola’s news publisher partners have access to data on trending topics in the Topic Insights part of Newsroom, our real-time audience analytics platform.

Taboola Newsroom helps publishers’ editorial teams understand not only the biggest topics overall, but also the most popular among audiences on social media and search. It also let’s publishers foster audience loyalty by letting them understand the topics core audience members are reading on their sites and elsewhere on our network.

It’s a fun bubbly-matrix filled with useful data. Here’s how it looks.

Beyond these options, we’re always looking for interesting ways to use our data to help bring context to how news readers are interacting with real-world events such as measuring which presidential candidates are getting the most attention.

Feel free to DM @franberkman on Twitter if you’re doing any research or reporting that you think our data could help support.