Everyone can sense the excitement growing when it’s nearly time for football’s biggest game. You may notice more trash talking among fans in the comments section on related articles on your favorite publishers, more work meetings getting sidetracked by quarterback comparisons, and more anticipation everywhere for the halftime show. 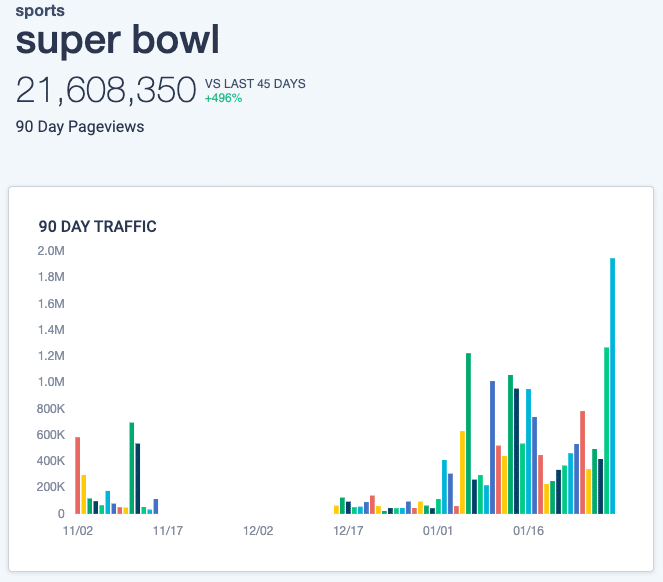 Just as you can feel the football buzz building, Taboola’s Topic Insights, which is part of our real time audience analytics platform Taboola Newsroom, can measure it. In fact, using natural language processing AI to analyze articles from thousands of US news partners, we’ve clocked a nearly 500 percent increase in interest for the term “Super Bowl” over the past 45 days.

After checking in on some football news throughout December, readers really began to focus on the event in early January, with interest skyrocketing on Championship Sunday, when the Bengals and the Rams won their slots in the big game.

Taboola’s Topic Insights tool shares intelligence from our uniquely broad sample of US news readership with all our news publisher partners.

Measuring the build-up of excitement over the big game is just the beginning. Our data analysis goes wide, teasing out the most attention-getting topics across sports, and also goes deep, gauging interest in the teams playing in this year’s big game, as well as the quarterbacks, coaches, and — of course — the halftime show.

Read on for our data insights on the big game as pulled on January 31st, 2022.

With the big game around the corner, it’s no surprise that people are reading about football-related topics more than anything else right now. 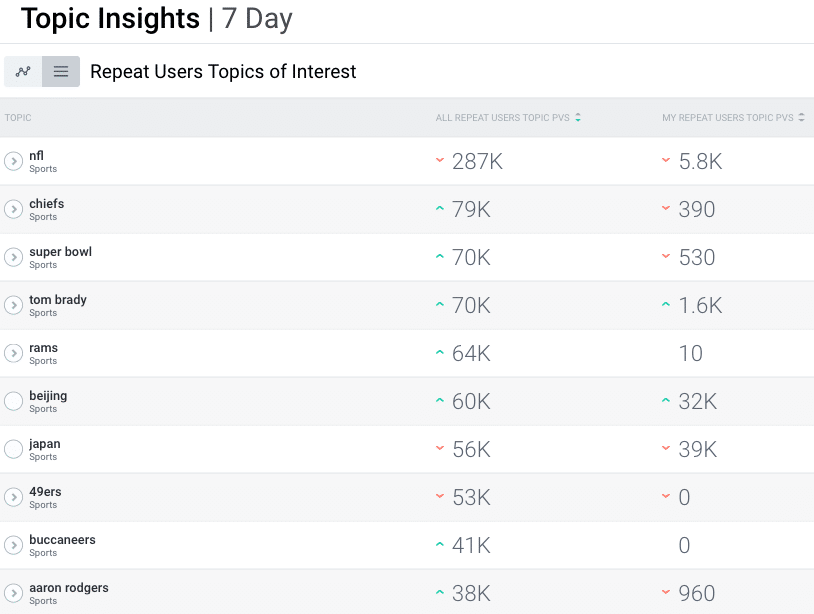 In the past week, the most popular articles have involved the NFL, the Chiefs and the final game of the season. Even NFL topics unrelated to the big game have captured attention, notably Tom Brady, since the legendary Tampa Bay Buccaneers and New England Patriots QB announced his retirement February 1st. In fact, Brady garnered more readership than the Rams, even though they’re playing in football’s biggest game. How’s that for a show stealer?

The ever-controversial Aaron Rodgers also managed to stay in the top 10, despite the Packer’s early elimination from the playoffs. Many of those articles speculate on whether Rodgers will leave the Packers.

Of course, even the week before the game, sports is not all football, all the time. With the winter olympics beginning February 4th, “Beijing” has earned a spot on the top 10 list. 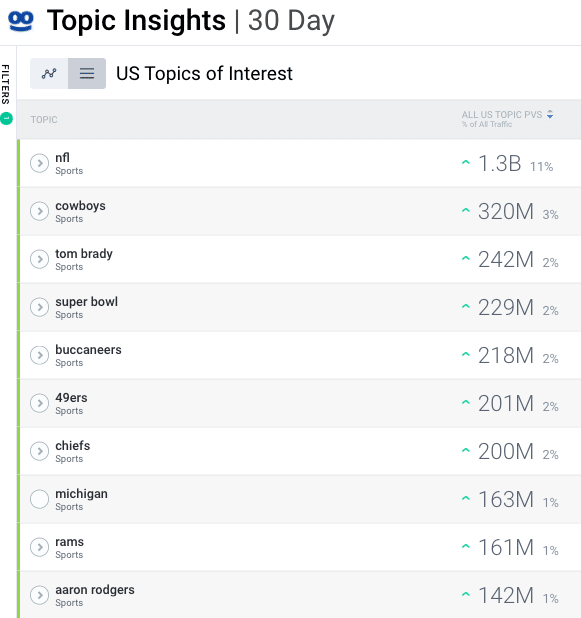 If we step back a bit and look at the past month, readers’ devotion to football is nearly total. More than 10 percent of all traffic focused on the NFL, and all top-10 terms are connected to football.

After a Long Drought, the Bengals Make Rain 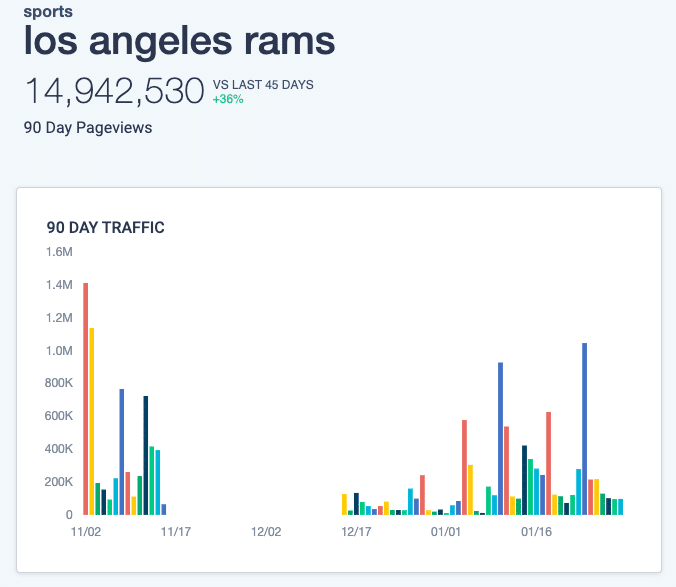 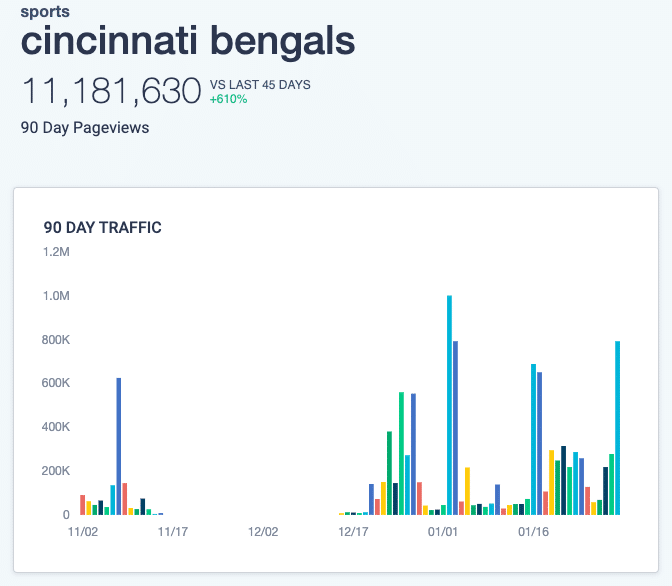 We can’t predict who will win, but we can tell you who is winning the public’s eye: the Los Angeles Rams. LA’s team garnered nearly 15 million pageviews in the past 90 days, while Cincinnati’s team got just over 11 million.

On the other hand, the increase in interest in the Cincinnati Bengals as the playoffs approached continued was much steeper. Compared to the previous 45 days, Cincinnati views grew sixfold, while LA views increased only 36 percent. 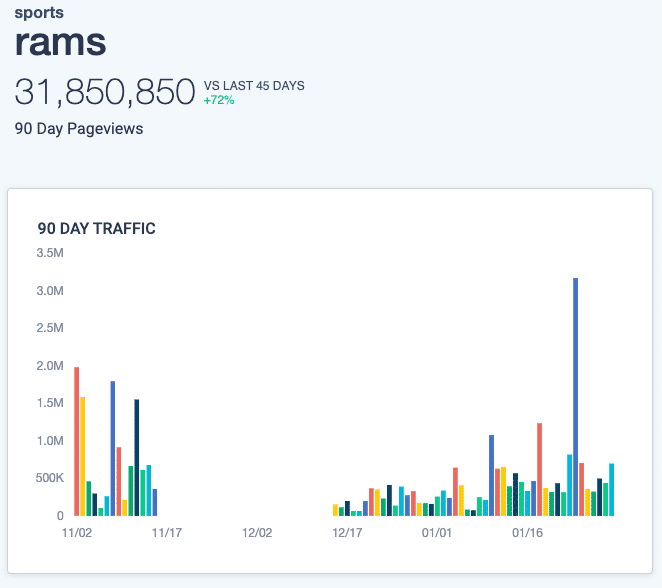 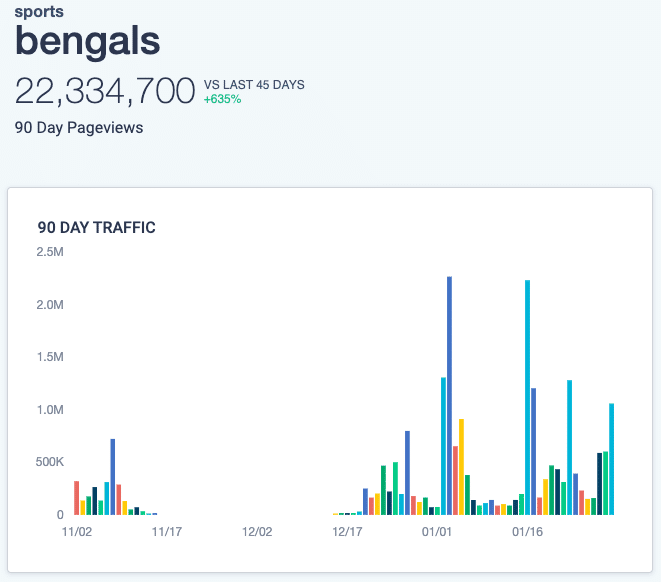 If we focus in on the team names, without the cities, we see a similar dynamic: The Rams get more pageviews than the Bengals (31.8 million versus 22.3 million), but the Bengals again increased more than 600 percent, while the Rams increased only about 70 percent.

Can Burrow Go the Distance? Readers Want to Know 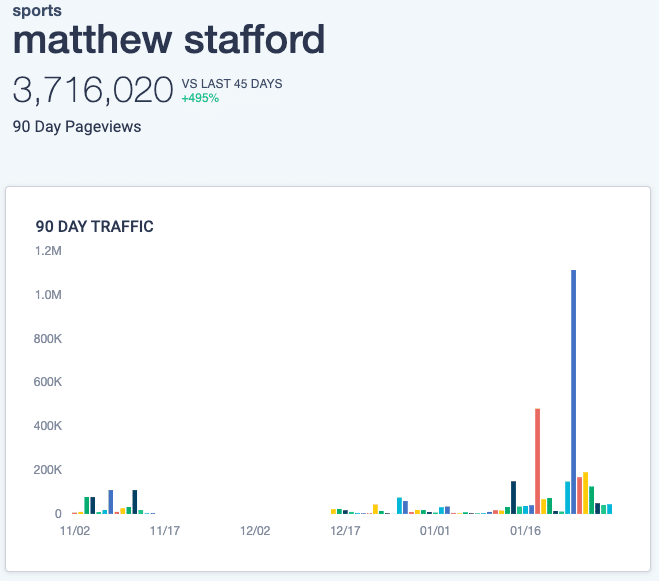 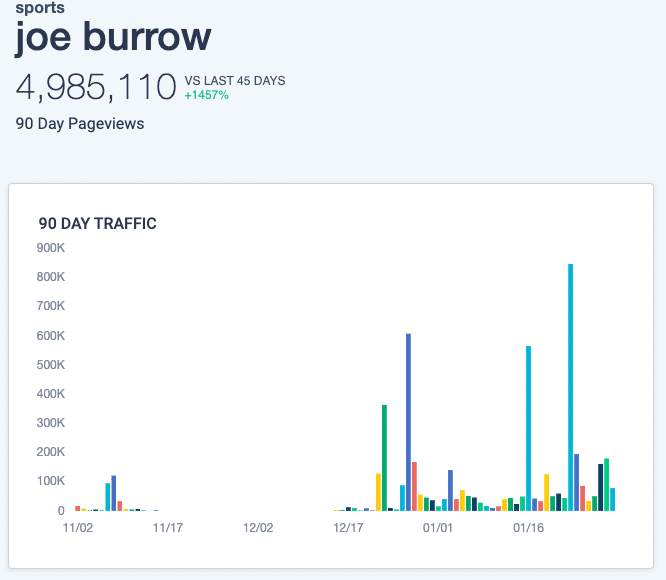 Following the trend established by the teams, the increase in interest in the Bengals’ quarterback, Joe Burrow, has skyrocketed much more significantly than that in the Rams’ Matthew Stafford. In fact, not only has interest in Burrow grown more, people are viewing more articles about Burrow overall than on Stafford. In the past 90 days, Matthew Stafford had 3.7 million pageviews, up 495 percent versus the last 45 days, and Joe Burrow had about 5 million, up a whopping 1,457 percent versus the previous 45 days.

This can probably be explained by the fact that Burrow is practically a rookie, getting drafted by the Bengals in 2020 and this season leading them to end a 20-year-plus playoffs drought. Stafford, on the other hand, has been in the NFL for years, playing for the Detroit Lions for more than a decade before being traded to the Rams last year. 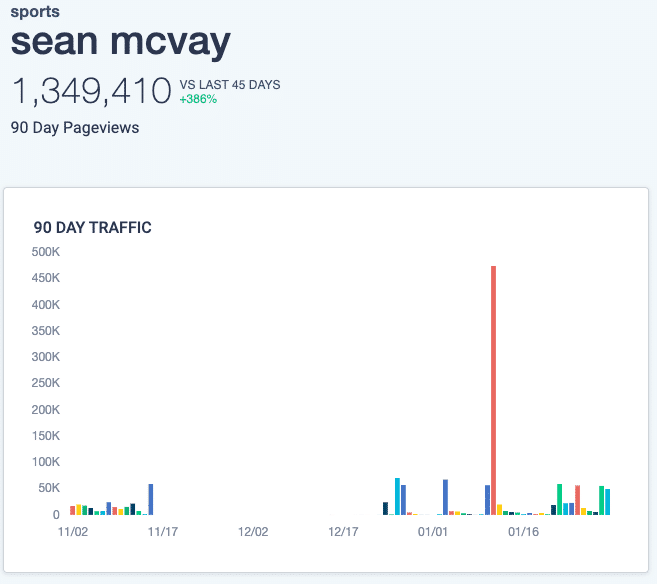 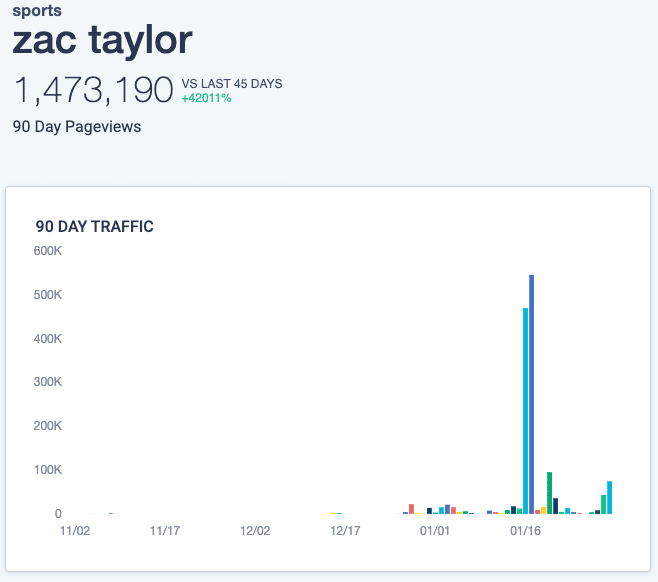 Buzz for the contestants’ coaches, Sean McVay (Rams) and Zac Taylor (Bengals), follows the same pattern: The Bengals’ coach has taken off a lot more steeply than the Rams’ coach. This makes sense when you realize that Taylor is pretty new to the Bengals, and just led them to win their first conference championship since 1988, while McVay just won one with the Rams in 2018.

Which of Five Stars Shines Brightest? 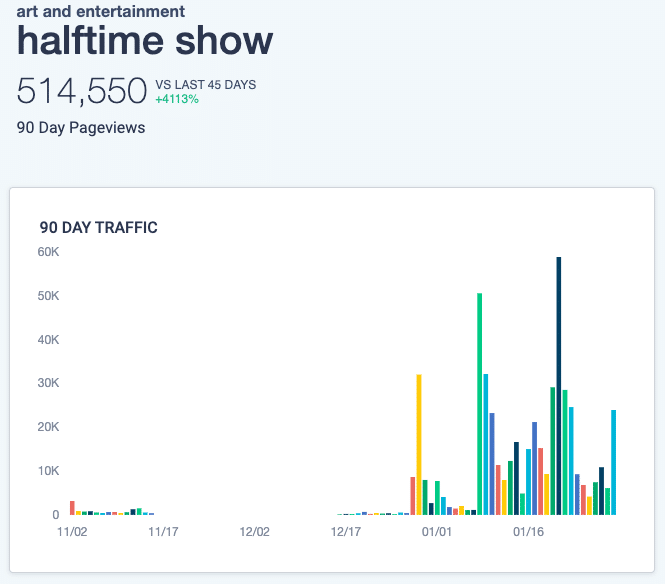 Although many of us tune in mainly for the halftime show, the topic does not attract nearly as much interest online as the teams themselves or the quarterbacks. The term “halftime show” garnered about half a million pageviews in the past 90 days. Interest definitely built on this topic beginning in early January, though. Overall, traffic focused on the halftime show increased 4,113 percent compared to the previous 45 days.

One exciting thing about this year’s mid-game performance is the number of headliners. Five acts will perform: Dr. Dre, Snoop Dogg, Eminem, Mary J. Blige and Kendrick Lamar. Which of these superstars has attracted the most attention online in the leadup to the show? 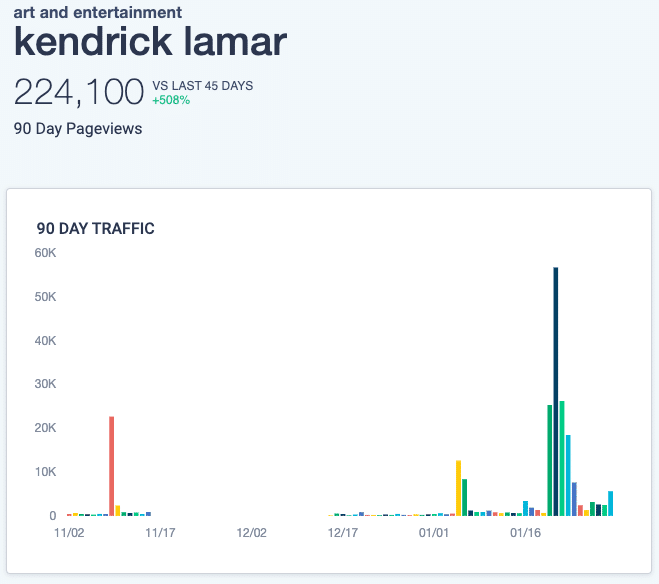 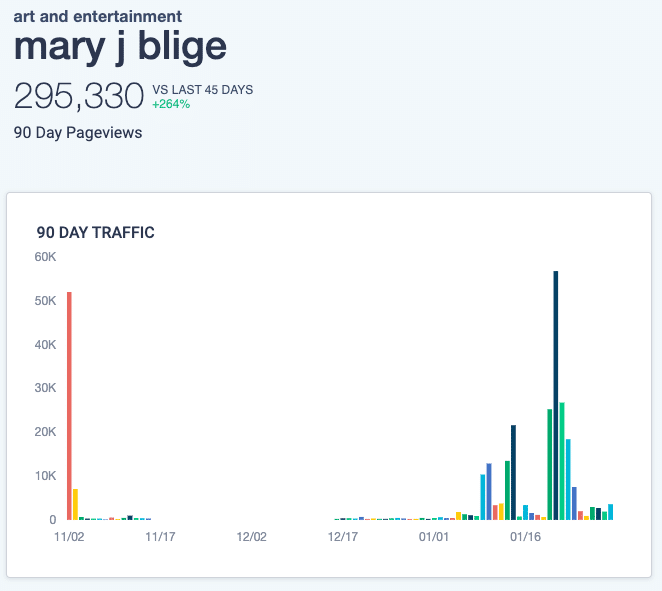 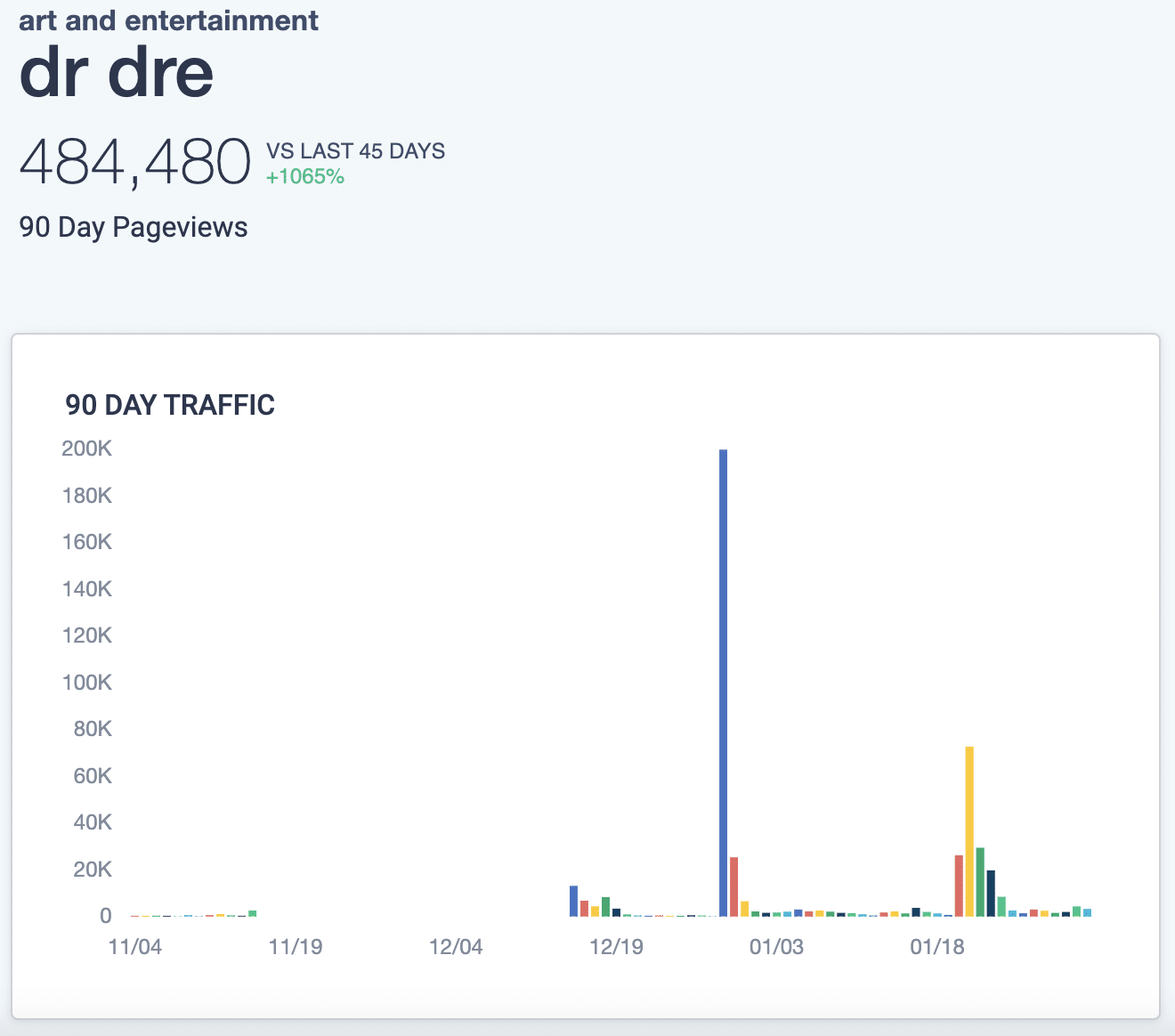 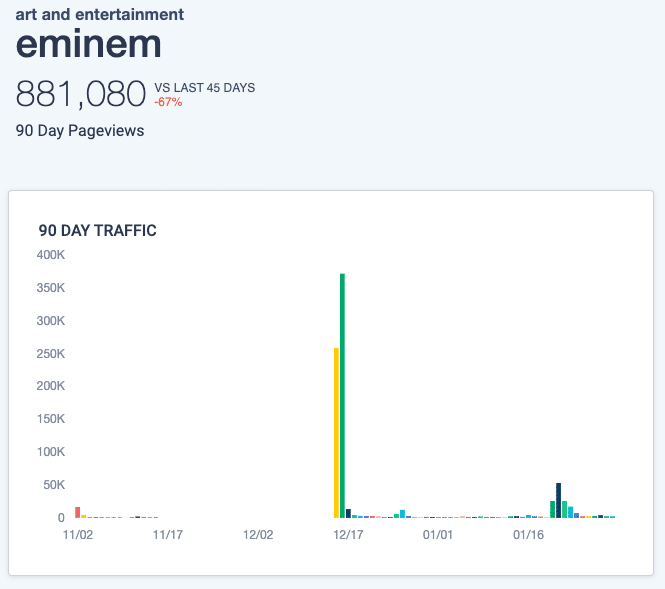 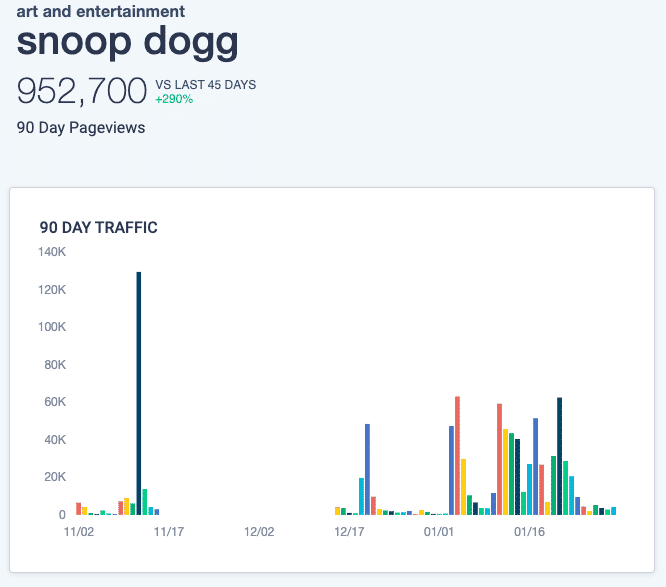 Although his pageviews fell in the middle of the pack, the performer whose buzz increased the most as the big show approached was Dr. Dre, who saw 1,065 percent more traffic than the previous 45 days. Eminem, curiously, actually declined in pageviews as the big game approached.

Now that you know what readers have really been focusing on in the lead up to the the big game, ask yourself, How could this type of data help me? Contact Taboola to discuss how our insights can support your next project.