Shows and concerts were cancelled, movie sets were forced to halt production, and countless film premieres were delayed or shifted online as cinemas closed worldwide.

Now, as the UK comes out of its third COVID-19 related lockdown, this time with over half the population having received at least one vaccination, our hope for the return of the in-person entertainment industry is restored. With confidence that we’re reaching the beginning of the end of this pandemic, it’s finally time for movies to make up for lost time.

Reader interest indicates that the UK population is ready to return to in-person entertainment: for example, in the past 15 days on the Taboola network in the UK, traffic to topics such as Shows and Events, Movies, and even Art has been increasing. 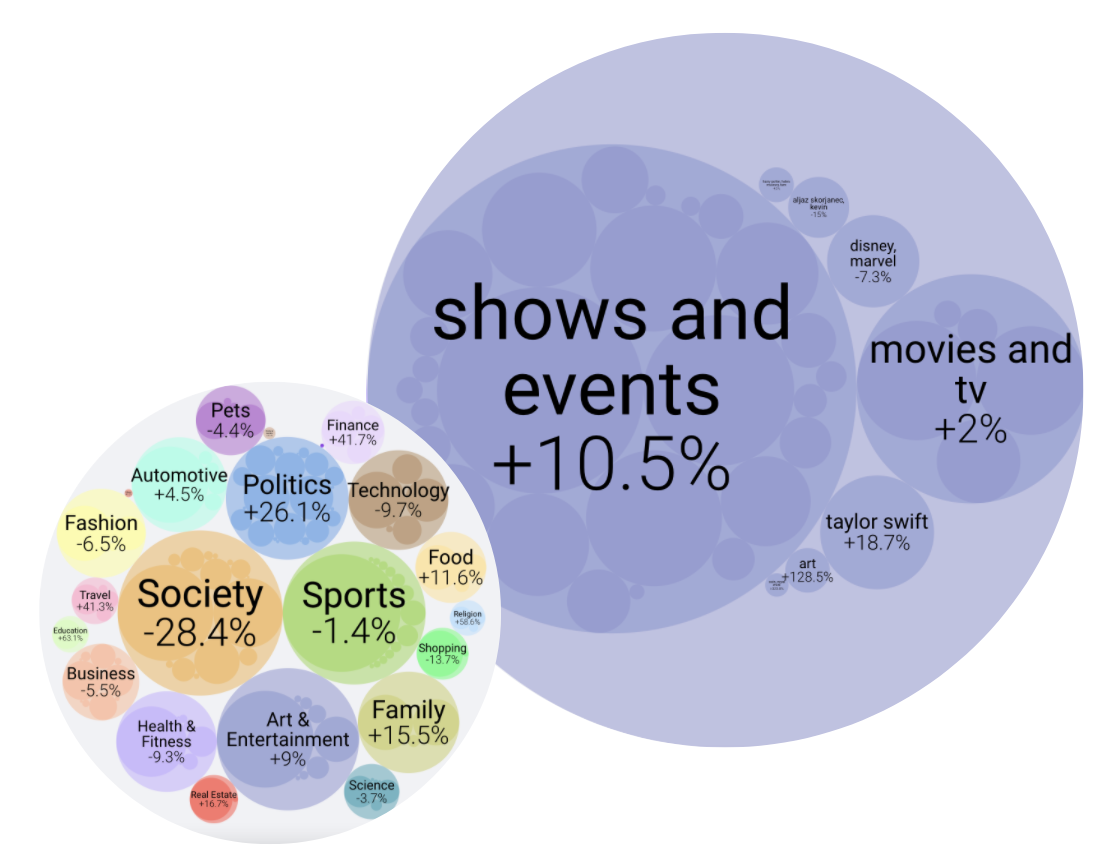 With more readers showing interest in in-person shows and events, and cinemas reopening, we wanted to gauge which 2021 movie releases fans are reading about.

It’s no surprise that the most read-about upcoming release in the UK, with 1.95M pageviews, is “No Time to Die,” the much anticipated 25th installment of the James Bond film series. The film’s release was originally scheduled for in April 2020, but following multiple delays, it’s now expected to hit screens in September 2021.

In close second with 1.94M pageviews, “Spider-Man: No Way Home,” scheduled for release in December, is just one of several movies set in the Marvel cinematic universe that fans are looking forward to in 2021. “Black Widow,” “Venom: Let There Be Carnage,” and “Eternals” also made the top 10.

With so much enthusiasm from movie-goers to view their most-loved stars on the silver screen, it’s the optimal time for entertainment industry advertisers to bank on ticket-buyers.

How can film marketers capture fans’ attention this spring? Here are our tips for a successful movie launch campaign.

There’s a good reason that film is such an engaging format. As humans, we’re predisposed to pay attention to movement: for our ancestors, the ability to spot a predator or potential prey would have meant the difference between life and death.

Film marketers, of course, are at an advantage when it comes to creating eye-catching video ads, with an abundance of footage at their disposal. If in doubt, a great place to start is the film’s trailer. In some cases, all you need to do is add subtitles, and you’re ready to get started!

Alternatively, consider using clips of the movie to create customised video ads. The advantage of creating a brand-new ad is that you can use current trends to guide the type of footage you select.

For example, you can use Taboola Trends, a free resource that analyses the performance of thousands of ads running across our network weekly, to see what video characteristics are likely to perform well.

Here are some current trends in the UK:

Filters can be fun, but our data shows that colour videos are currently performing better than black and white, achieving a 403% higher completion rate on average.

It may be tempting to overlay a film’s title over the video for maximum exposure, but video ads without text are actually achieving an 83% higher completion rate on average. Instead of placing text in your video, consider how you can make the most of the headline underneath.

Speaking of headlines, there are a few things you can do to make sure yours is as engaging as possible.

First, you can use our Keyword trend tool to identify high-performing keywords. For example, the word ‘rumours’ is currently yielding an average of 23% higher CTR in the Entertainment category in the UK. Consider incorporating this word into your headline for a better-performing ad.

Once you’ve got some headline ideas in mind, you can A/B test them using our Title Analyser tool. Here’s an example of how these four possible headlines stack up in terms of predicted CTR: 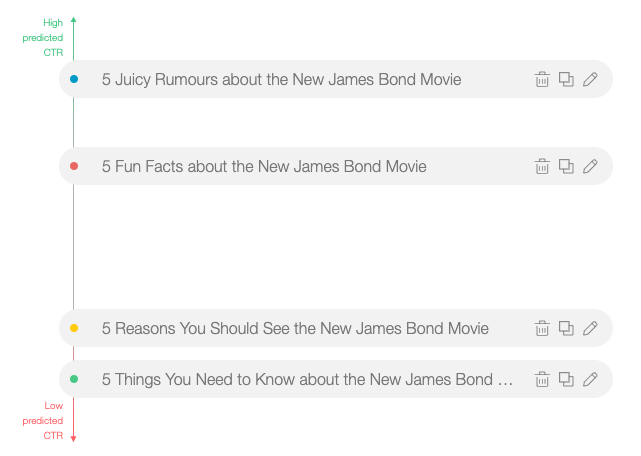 Once you’ve settled on your creatives, you need to make sure your ad reaches the right audience.

For some movies, this might just mean reaching as many people as possible.

To achieve massive scale, consider adding the open web to your marketing mix. For example, by distributing an ad on Taboola, you can reach over 21.5M daily active users in the UK, and over 500M worldwide.

If, however, you’re looking to get more granular, try using behavioural targeting categories to reach people with specific interests. Here are some examples of first-party data segments you can target on Taboola in the UK:

You can also test contextual targeting segments. For example, by targeting the data segment “Contextual > Art and Entertainment > Movies and TV,” you can reach readers at the exact moment when they’re reading about content relevant to your ad. 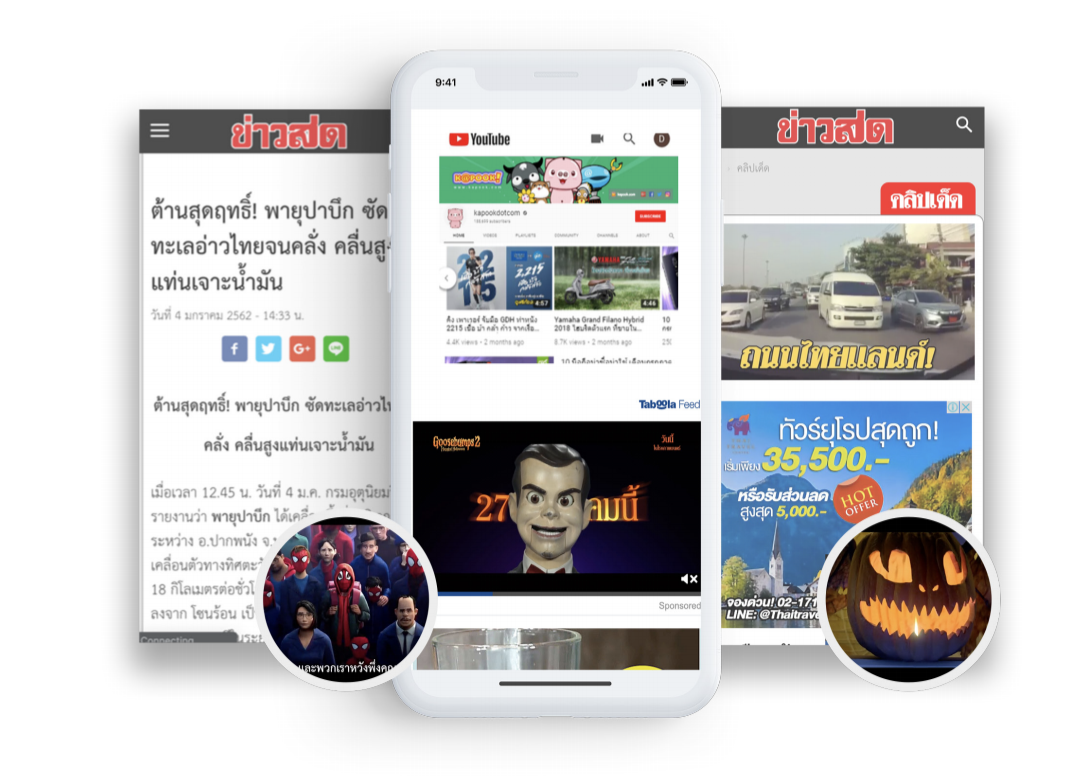 To put these tips into perspective, here’s an example of a great campaign that Sony Pictures Entertainment (SPE) Thailand ran to drive awareness for its upcoming movie releases—specifically “Venom,” “Goosebumps: Haunted Halloween,” and “Spider-Man: Into the Spider-Verse.” You can read the entire case study here.

SPE wanted to drive both awareness and ticket sales. To do so, they worked with Taboola to distribute movie trailers to viewers on tablet and mobile devices in Bangkok.

The campaign was extremely successful, achieving over 194,000 completed video views and over 411,000 impressions.

Contact our team to find out how Taboola High Impact can place your Entertainment brand in the spotlight on premium publisher sites in the UK and worldwide.