Imagine you’re lost in a rainforest. You suddenly spot something moving out of the corner of your eye. It stops you in your tracks and demands your attention. Why? Because it could be life-threatening or it could be a source of food.

The point being, our attraction to movement doesn’t just stem from wanting to see something cool or pretty. It’s wired into our brains as an evolutionary survival skill. It’s so strongly wired, that there are specific parts of our brain in charge of detecting movement and even particular cells with that sole function.

Marketers can tap into these primal instincts by incorporating movement into their video ads. And, yes, they can also use movement to show us something cool or pretty.

Here’s what you need to know to make it happen:

Movement in video catches our eyes, halts our scrolling, and makes us stop and look. It’s that feature that keeps us watching and says:

“Hey! Look over here. There’s something you should see.”

Some online studies even show that seeing a video, or anything animated while scrolling on a webpage is almost impossible to ignore, even if we tried.

Consider one of the most successful video ads of all time: “Our Blades Are F***ing Great” by Dollar Shave Club. It launched the direct-to-consumer brand into a multi-million-dollar business.

What’s the running thread throughout the video? Movement. It shows founder Michael Dubin moving through the company’s office and warehouse while performing silly actions and hijinks.

The camera and star never stop moving, making it almost impossible to look away.

The physiological effects of movement

There are quite a few studies that explore this. In one specific study, researchers presented participants with static images and videos of emotional stimuli and found that the videos elicited a greater physiological response—measured by looking at both sweat glands and blinking—than the still images.

So, which movements in video work most effectively? We looked at the most recent video analysis on Trends.Taboola.com to find out the action types that perform best, right now. We discovered that very active movements, such as climbing, driving, singing, and dancing, increase viewability and completion rates up to 200%. Meanwhile, more passive activities, such as sleeping or texting, don’t perform as well. 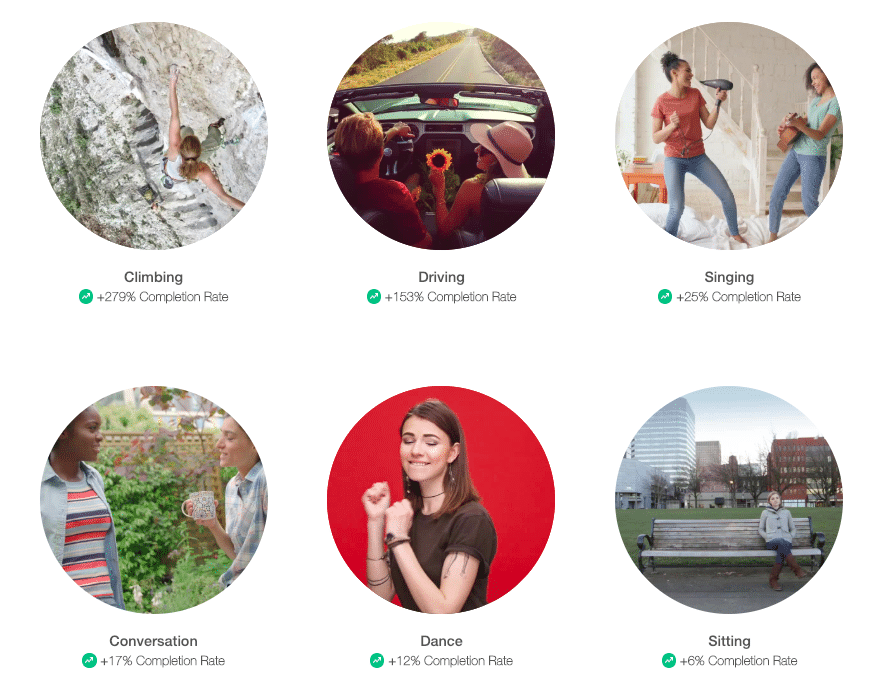 Consider Red Bull, the energy drink brand that built a media empire out of extreme sports content. The brand has churned out countless viral and shareable videos, including this imaginative video from Scottish biker Danny MacAskill.

From skateboarding and cliff diving to free-running and surfing, Red Bull covers it all, racking up millions of views per video and becoming the most-shared video brand online.

What does movement mean for marketers?

You don’t have to be an energy drink brand or an extreme sports publication to create successful video ads.

After all, Dollar Shave Club went viral with a video of its founder walking through a warehouse in his suit and tie. Just remember to find innovative ways to incorporate movement into your videos.

Filming a conversation? Take it out of the office and into a car. Reciting a boring speech? Turn it into a song and dance. Showcasing a product? Do it on a mountaintop. (Just kidding—or am I?!)

Movement isn’t just fun to watch. It taps into the core of who we are—human beings looking out for what’s moving around us, what excites us, what scares us, and what helps us discover that next best thing that we didn’t even know we were looking for.