Trending news stories are the most cheerful pastime.

OK—maybe not all stories are cheerful, but the ones that we do choose, we choose because they’re attention-grabbing, important to us, entertaining or, quite possibly, they do make us happy.

Whatever the reason we chose them, there were certain topics that outshined others with open web readers in the United States (US) in 2018—our mission was to identify them.

There are, we have noticed, two basic storylines floating around the web these days: those that involve President Donald Trump, and those that do not. We split our analysis accordingly to not overlook those important trends that do not include him.

Let’s break it down even further.

To analyze which general news stories won the minds of US readers, we broke seven news stories down into a group of keywords. When those keywords appeared within the headline or body of an article, we counted it.

#MeToo was a bit of a tough topic to analyze. Because the keywords related were, “Me” and “Too,” our initial results were skewed, as this combination of words naturally appeared in many more articles not related to the movement. To include this important story, we chose to analyze the hashtag.

The keyword North Korea attracted the most readers by far, and was most popular in February and in May. In February, the country made big headlines attending the Winter Olympics in South Korea, and in May, continued to stoke controversy in the US prior to the Trump-Kim summit. 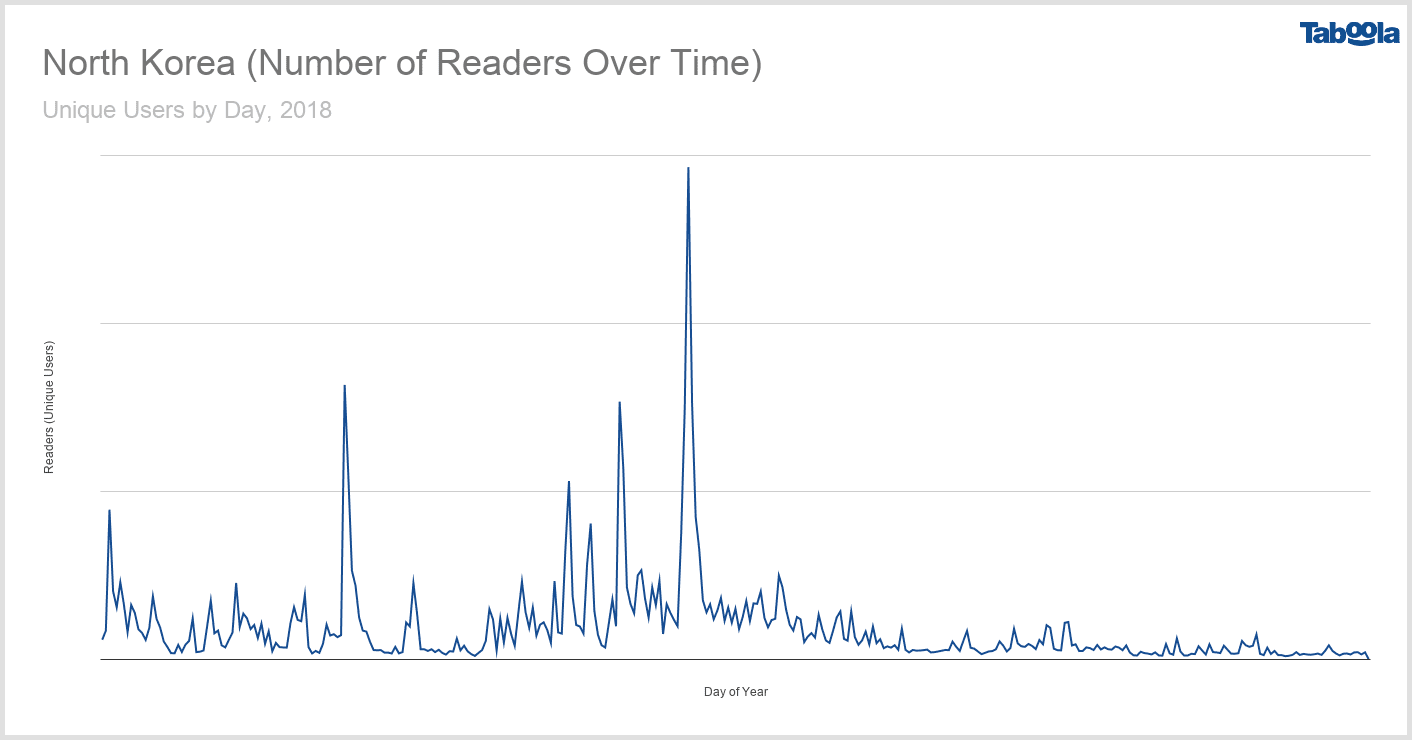 When you take a step back from where the online crowds collected and zero-in on where the most amount of time was spent, you get a different view of the international news scene.

We’re counting engagement as the most amount of minutes spent on average, per page. This allowed us to focus on topics that people really read about, and filter out the others.

Here, the #MeToo movement rose to the top, with the Stoneman Douglas High School shooting,  and Hurricane Florence not far behind. Still North Korea-related news has a hefty engagement score, but it’s worth noting that these other topics were on-par.

Most of the engagement with our frontrunner, the #MeToo movement, happened at the beginning of November, its one year anniversary date prompting the country to reflect on its effects.

Finally, news stories that included the keyword “Facebook” drew the most consistent crowds over the course of last year, likely due to the advertising giant’s part in several conversations about data and privacy in 2018.

Let me tell you folks, it’s really hard to boil down an entire year of pop culture stories into one analysis.

The Kardashians attracted way more readers than any of these other topics by far. There is an incredible amount of content out there covering the family, but the spike in reader numbers in the summer could be linked to new births or a family feud that made headlines.

Just like our general news analysis, when you look into engagement, the story changes. The keyword Kardashian gets pushed way down the line, behind front runner Black Panther and runner-up Fortinite.

Black Panther, which also eclipsed Fashion Week, was the first superhero movie to ever receive an Oscar nomination, returned to theatres for one night in November, attracted its highest number of readers.

Finally, the topic that attracted the most amount of readers over time was news about the popular Marvel Studios film series, The Avengers. The final culmination of the storyline was released this year, igniting the passion of fans.

Sports: The World Cup and the Winter Olympics

We included the Philadelphia Eagles in our analysis to encompass the Super Bowl, and counteract the copyright restrictions that might limit the use of the term Super Bowl.

The World Cup drew the most readers in the US by far, gaining the most attention in the summer months as the games came to a close.

US readers were most engaged with content about the the Winter Olympics, which enchanted sports fans in the States in February, when it naturally drew the most amount of readers. Interestingly, the World Cup fell to last place in terms of engagement.

The largest number of readers by far flocked to content about Russia.

Not only was Russia the topic that drew the most amount readers total, but it was also the most popular over time, likely due to the story’s longevity and the frequent updates on the investigation’s progress.

The news surrounding US-Russia relations peaked heavily in July, the date of the US-Russia summit, when it attracted the most readers. 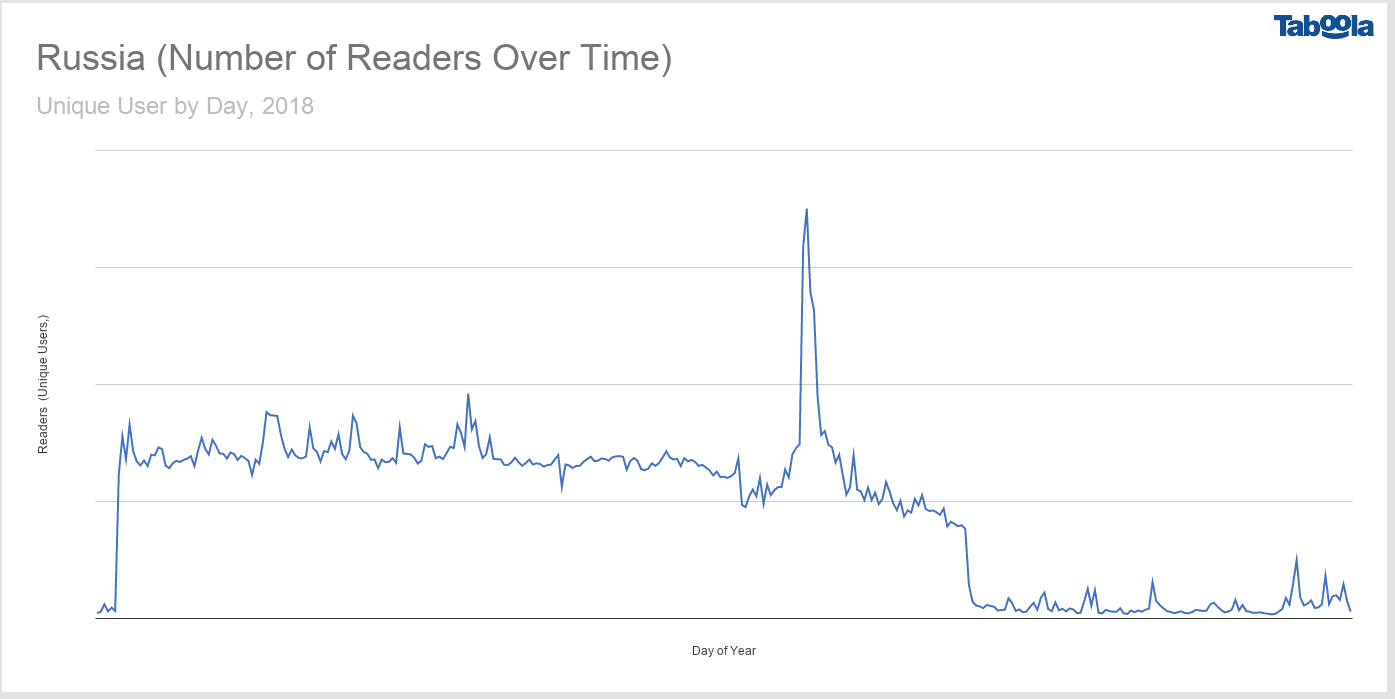 Like all of our other analyses, the story changes when we look at engagement. It’s worth noting that the special counsel, which is related to the Russia investigation, is still in second place. Its surrounding competitors, including our frontrunner, are topics related to immigration—specifically related to our relations with Mexico.

Its most heavily trafficked time occurred in June and November. The former, a time period when the fate of parents and children at the border was called into question, and the latter, which led into a US government shutdown related to ongoing discussions about the construction of wall.

Looking towards the new year.

As we ring in 2019, we bring these hot topics along in our wake, and while analyzing the pile of stories that people chose to read about en masse this past year, we took away one important lesson:

For each and every topic we analyzed, we found a difference between those that attracted the masses, and those that really engaged them.

This year, resolve to distribute what truly matters to your audience.