So far this year, basically everything has changed.

News publishers have faced the double challenge of keeping readers informed about how the coronavirus has impacted every facet of life while also dealing with their own shifting business landscape.

Traffic spiked to the moon…then went back to “normal.” Local news publishers saw an influx of new subscribers. Advertisers changed their strategies.

We’ve been closely watching traffic patterns for the hundreds of publishers who use Taboola Newsroom, our real-time audience analytics and editorial insights platform.

Here are five big picture US news readership trends from the first half of 2020.

Schools and offices shut down. Sports leagues got canceled. Getting groceries became a potentially life-threatening task. And no one needed to wear a mask, until everyone needed a mask.

In the early days of March, people across the US turned to the news en masse to figure out how to make sense of this new reality.

Average weekly traffic to news sites spiked to 50% above the pre-coronavirus six-month average.

Sustained attention is hard to maintain over time, no matter how objectively important a topic might be. The lives of nearly every American (and, of course, billions elsewhere) are now starkly different than they were a couple months ago—but their interest in news has rapidly regressed toward the mean.

US traffic remained at or above the average, bolstered by sustained interest in the coronavirus and subsequent topics like the NFL draft and then the George Floyd killing and protests.

The charts below show the spike and regression of first US news sites and then the global sites we work with (US sites included). 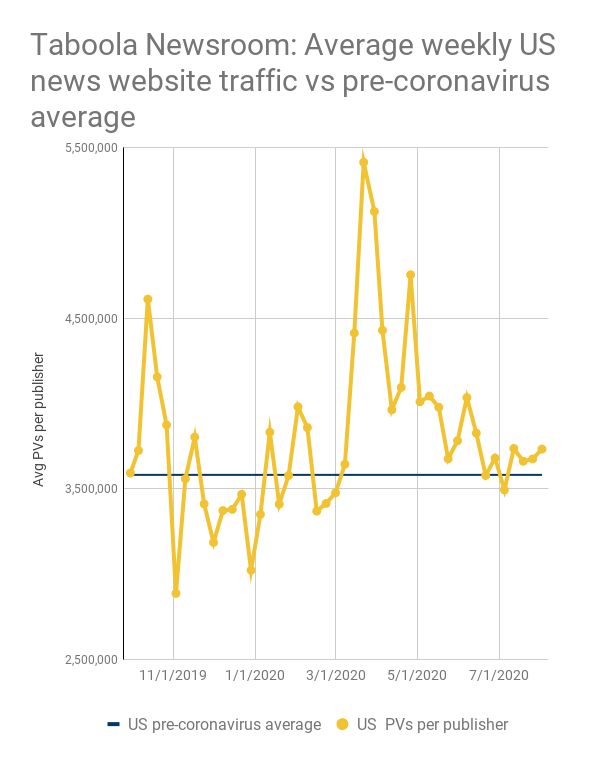 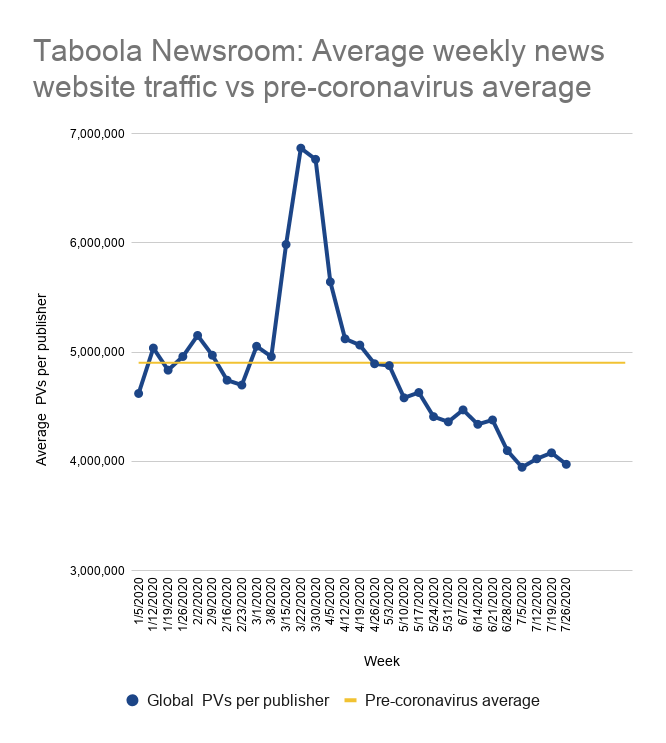 “The Coronavirus Revives Facebook as a News Powerhouse,” a headline in the New York Times read on an article published in late March.

The article reported how an internal Facebook analysis showed users consuming more news articles and how website traffic from Facebook had spiked for several major news companies compared to the previous month.

As we saw above, however, news traffic was up massively across the board. So the fact that publishers were seeing more traffic from Facebook during a time of unprecedented demand for reliable information is largely unsurprising.

The true test is if Facebook’s share of the percentage of the traffic increased, particularly as compared to Google’s since they’re by far the largest external traffic referrers to news sites.

In fact, Facebook’s share of traffic referred did jump significantly to the point of almost matching Google’s for a period of two weeks. The momentum didn’t last long. 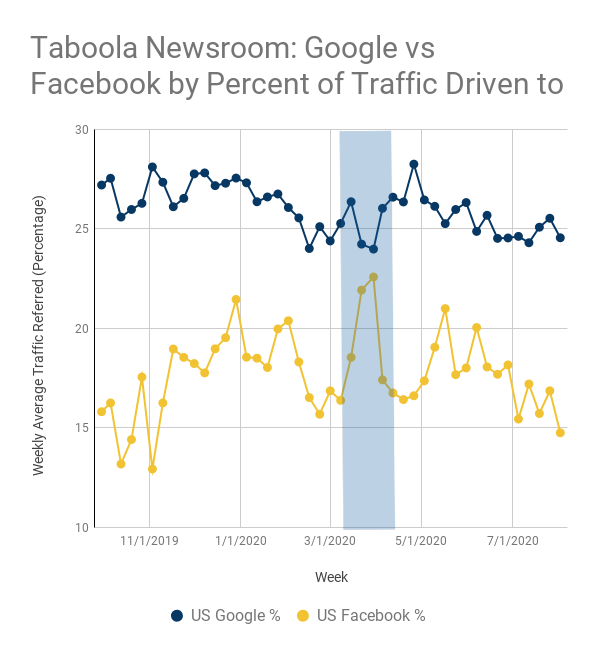 Facebook is well-positioned to be a crucial information source when major news hits. Compared to every external platform aside from Google, Facebook is a massive traffic driver to news websites.

But overall, Facebook has been an inconsistent partner to journalism. Frequent algorithm changes over the years have had the net effect of making news content less visible in Facebook’s News Feed and have left publishers feeling like they’re constantly trying to hit a moving target.

In addition, we’ve seen that Facebook can also be a major source of confusion during big news events, as multiple videos peddling conspiracy theories and harmful misinformation have gone massively viral on the platform during the pandemic.

Far below the massive traffic impact of Facebook and Google, mobile app news aggregators such as Flipboard have been jockeying for dominance over the years. They add up to being a small but significant source audience for news sites based on the articles they curate and push out to their users.

In this crowd, 2020 has found a breakout star: News Break.

At the start of the year, news sites were getting about .5% of their traffic from News Break. That number jumped to over 4% in late March before settling at around 1.4% in the past 2 months.

This is still nearly a 3x increase from the start of the year and has positioned News Break alongside Flipboard near the top of the class. 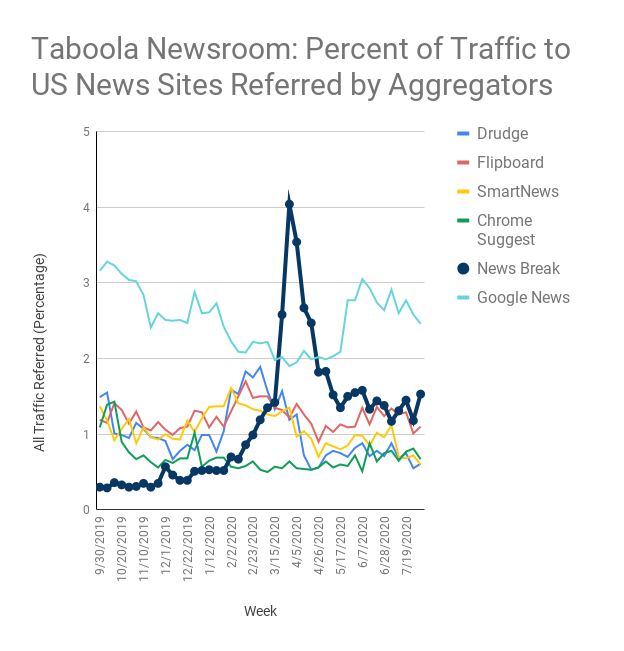 I downloaded News Break to get a sense for how the app works. It has an aggressive push notification strategy focused on local news, specifically crime stories.

As you can see below, in the days after I downloaded the app, I received about 1 notification per hour in the afternoon-evening hours and the majority of them were to articles about local crime or tragedy. 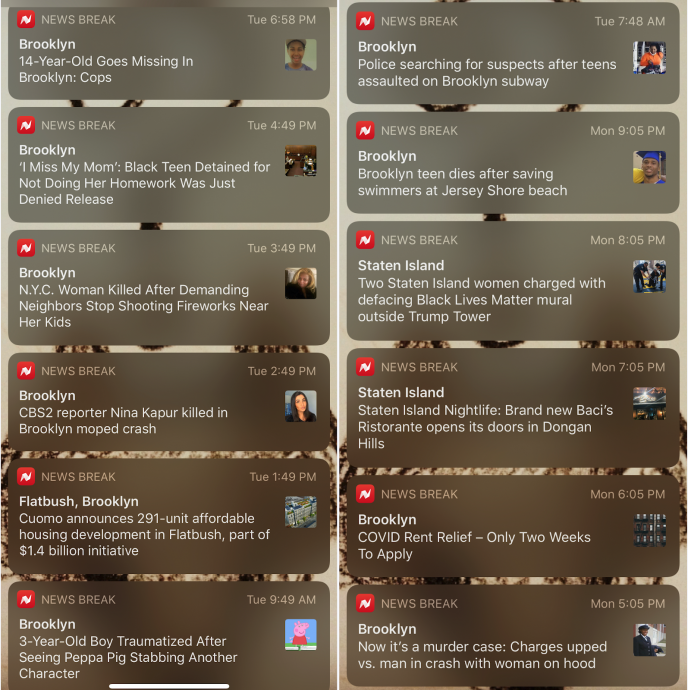 The George Floyd killing and subsequent global protests engaged audiences on news sites like few other topics we’ve ever seen.

We saw more views on articles about Floyd in the month of June alone than most major news topics have received in all of 2020. 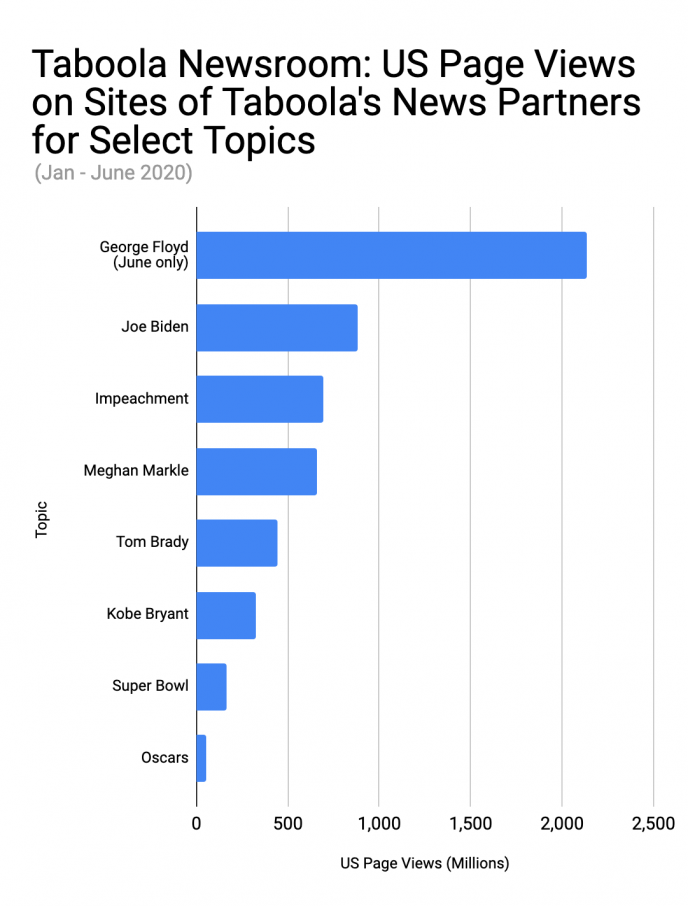 We spoke to Ethan Zuckerman, who studies media coverage and audience attention as director of MIT’s Center for Civic Media, to learn more about why this incident was so resonant. There were several factors.

First, a wave of Black Lives Matter activism dating back to the 2012 killing of Travon Martin has raised the issue of violence against black men and women in the public consciousness, in part by driving news sustained coverage.

This foundational awareness was crucial to the major breakthrough in awareness and support for the Black Lives Matter movement after Floyd was killed.

Secondly, this activism caused news coverage of the killings to increase and change. A study titled “Whose Deaths Matter” Zuckerman and his colleagues published last year found the 2014 killing of Michael Brown was a major transition point at which news coverage of killings of unarmed black men and women increased and became more likely to treat the incidents as part of a troubling trend rather than isolated incidents.

Finally, like the killing of Brown, whose body was left in the street for hours after police killed him, a particularly heinous aspect of Floyd’s killing sparked massive public outrage. Bystander video showed the painstakingly long incident in which a Minneapolis police officer knelt on Floyd’s neck for nearly 9 minutes.

For more on this, we published our research in a past post: The Impact George Floyd’s Death Had on Americans Can’t Be Overstated.

As we saw above, the coronavirus traffic spike came and went in a matter of weeks. But long after it was gone, we were still seeing an unprecedented amount of page views on the biggest topics. 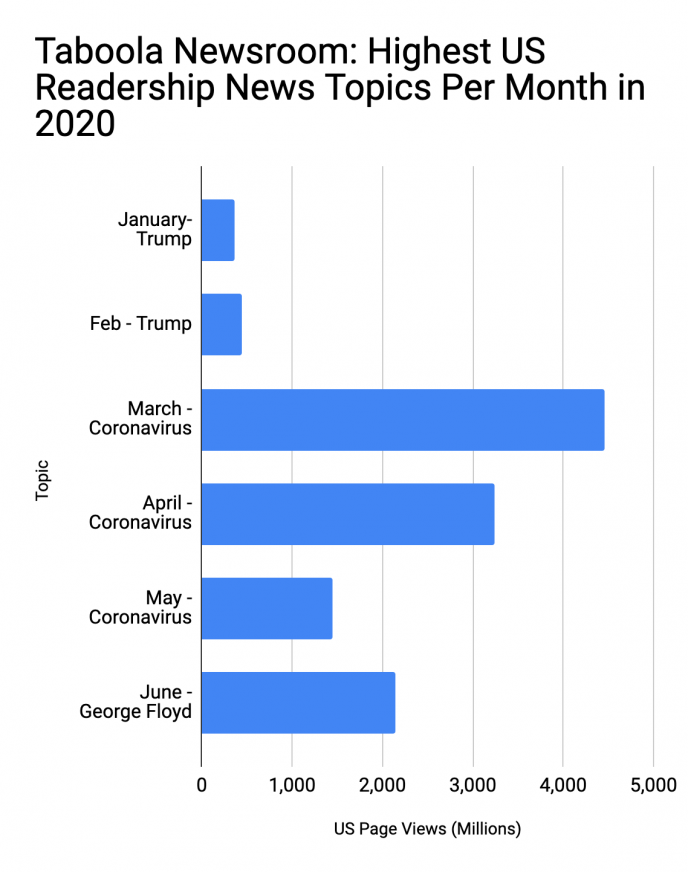 That’s a bit of a scary thought. Think of all the important news topics that are possibly being ignored. Climate change immediately comes to mind.

There may actually be something else going on, which is that all other topics are being framed through the lens of the mega-topic.

Whether it’s fitness, sports, local government, parenting or anything else you can imagine really, most news stories published in March and April are going to need to address the fact that the coronavirus had the entire world on lockdown.

George Floyd may have had a similar effect as many cities and towns saw ongoing protests that became a factor highly considered when discussing many other news topics.

Despite this mitigating factor, it’s likely these mega-topics have sucked up much of the attention oxygen. One huge challenge for news outlets for the rest of the year and beyond is figuring out how to maintain coverage of the full range of topics that impact people’s lives.

Doing research or reporting on interest in news topics? Feel free to DM @franberkman on Twitter if you think our readership data could help support your project.