In partnership with Kantar, the world’s leading data, insights, and consulting company, brands have the opportunity to see where the rubber meets the road in their Taboola campaigns.

Taboola recently performed a meta analysis on data from all brand lift studies conducted in the past 2 years across 11 verticals, including personal finance, tech, oil and gas, travel, fashion, entertainment, and B2B. These brands operate across Europe, Latin America, and the US.

Kantar used a pixel, or cookie, to track exposure to Taboola ads among 2 groups: a group that saw the ads (the exposed group), and a group that didn’t see them (the control group). During the campaign, all participants completed the same survey through Kantar’s platform.

Kantar then compared the data and calculated the impact the campaign had on the various KPIs examined, thanks to a match between control and exposed groups where the only discriminator is the exposure to the campaign.

Brands who worked with Taboola met critical KPIs across the board consistently — and most often exceeded these KPIs — in comparison to Kantar’s verticalized industry benchmarks. Here are a few highlights from Taboola’s findings:

Because most of Taboola campaigns include video, we also compared performance to Kantar’s video-only campaign benchmarks. Let’s take a closer look at how all of these campaigns performed.

Brand favorability lift was 15%, 4x higher than the industry average 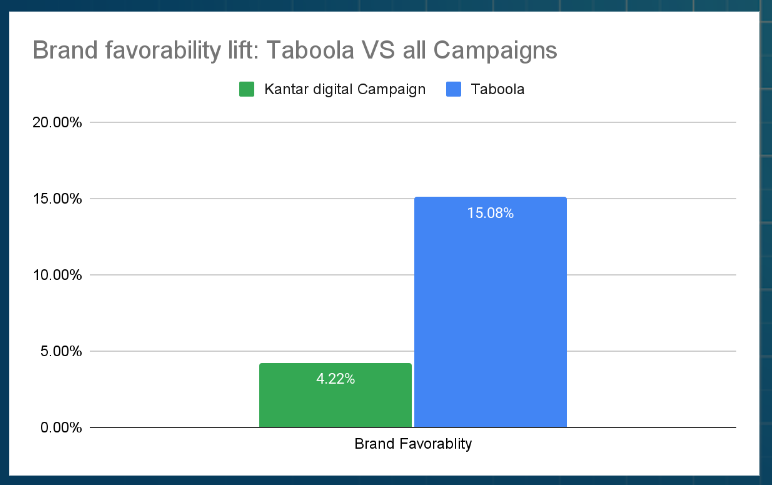 Because most of Taboola’s studies include video ads, we also compared the results with Kantar’s video-only benchmarks. In this comparison, performance between the two groups was nearly identical at roughly 15% lift. 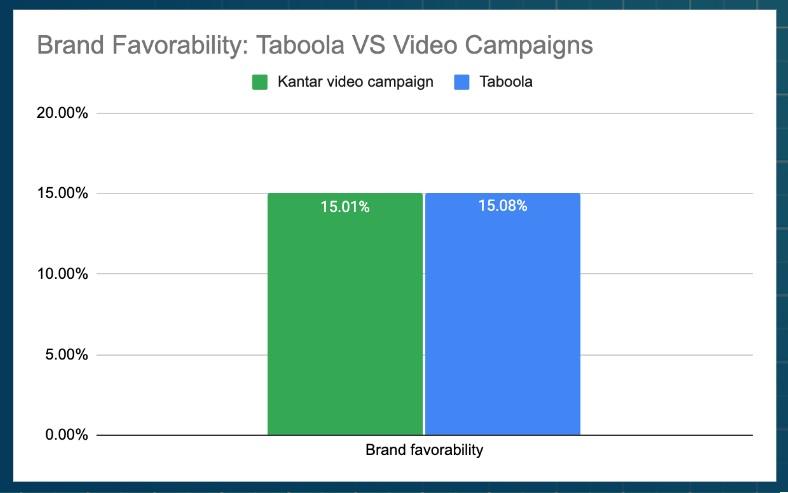 Brand favorability is the audience’s answer when asked: Describe your overall opinion about the following brand.

Consideration lift was 7%, 1.5x higher than the industry average

Taboola’s average consideration lift is 6.7%, while Kantar’s average lift for digital campaigns is 4.6%. When compared to video-only Kantar benchmarks of 3.1%, Taboola’s campaigns had an even stronger impact with double the lift. 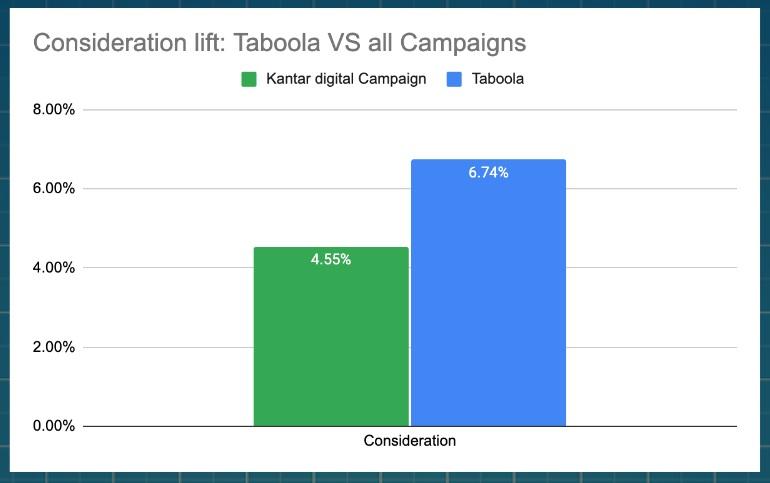 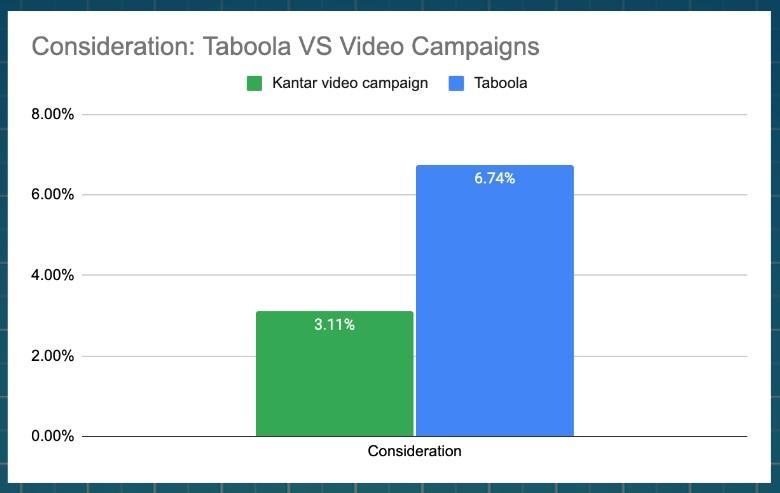 Consideration is the audience’s answer when asked: Next time you’re looking for [this type of product or service], how likely are you to consider the following brand?

Message association is the audience’s answer when asked: Which of the following brands uses the following message in their advertising? This is a powerful metric because it shows a strong memory and connection to how your brand can benefit them.

Taboola’s average message association lift is an impressive 87%, while Kantar’s average lift for digital campaigns is 10.1%. Taboola remained higher in comparison to Kantar’s video-only campaigns too, which clocked in at 15%. 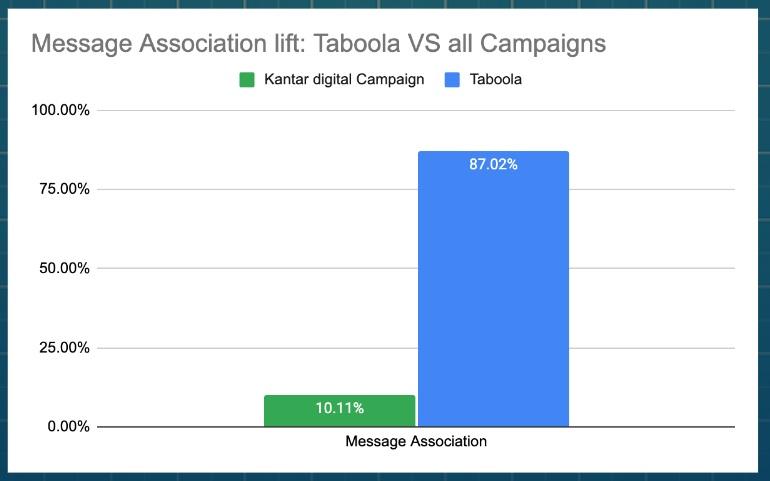 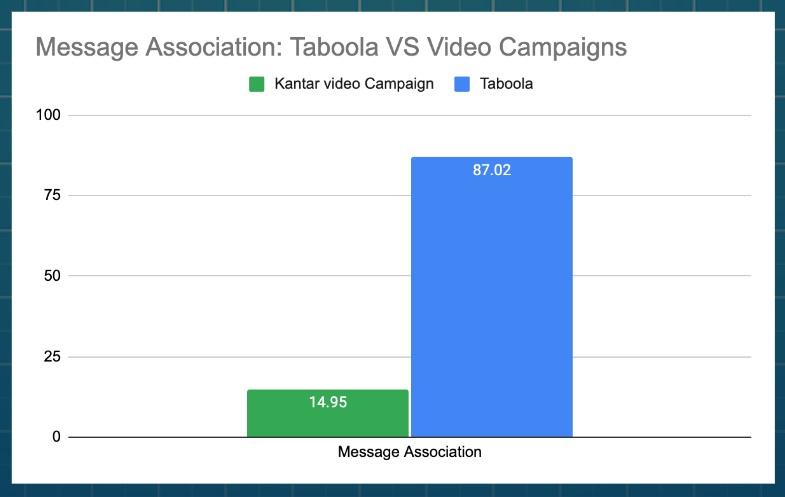 Case study: Ancestry looks under the hood of its Taboola campaign success

The UK team of genealogy company Ancestry had been working with Taboola, but had never activated a video campaign on the Taboola platform. The company had been exclusively using YouTube.

When company leaders voiced their desire to measure their audience’s familiarity with the brand, as well as tap into more mid-funnel activities, they decided to run a high-impact placement (HIP) video campaign alongside a brand lift study to measure performance.

In the end, the campaign exceeded expectations across almost all KPIs. These included a video completion rate (VCR) uplift of 32% and a viewability uplift of 10%, as well as price efficiency. Additionally, most KPIs saw a lift that was above industry average.

Taboola performed the strongest across the different platforms, driving the most assisted conversions by a significant margin.

The team at Ancestry says: “The success of our familiarity campaign speaks to the fantastic relationship we have with Taboola, and the opportunity within the platform to educate and convert new users.”

In a world where readers demand a more personal, relevant connection to the content they consume and the companies they do business with, native advertising will continue to play a unique and pivotal role in connecting brands and consumers.

Ready to see how well your digital campaigns are performing — and exactly where your advertising dollars are going? Speak to your Taboola account manager about whether you’re eligible to sign up for a brand lift study.