Football fans rejoice, the big game is upon us.

It’s not called the big game for nothing. There’s always plenty of buzz surrounding the Super Bowl. But what’s getting the most attention: star quarterbacks, anxious defenses, scheming coaches or halftime performers?

Taboola’s Topic Insights, part of our real time audience analytics platform Taboola Newsroom, allows us to see who’s getting the most attention from readers on US news websites.

We use natural language processing AI to determine the topic of all the articles being read on the websites of our thousands of news partners. This tool, which is available to all Taboola’s news publisher partners, provides a uniquely broad sample of US news readership.

Who’s off to an early lead in the Super Bowl of buzz? Let’s see what the data say. 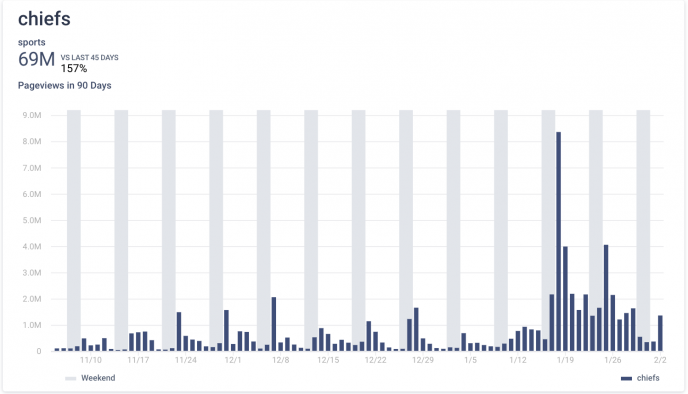 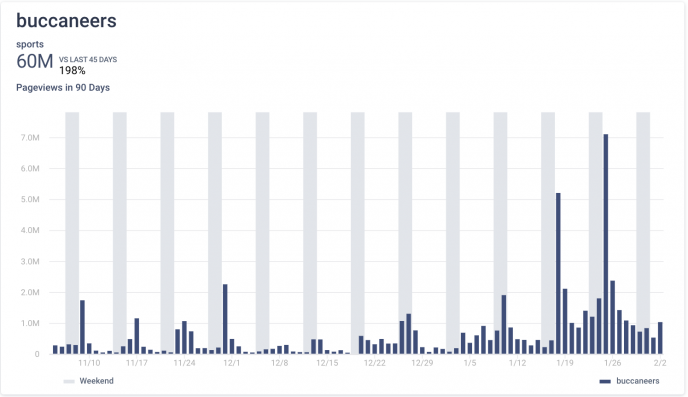 The defending champion Kansas City Chiefs have slightly edged out the upstart Bucs in page views looking at the last 90 days.

While the Buc’s biggest traffic spike came just after their NFC Championship win over the Packers, the Chiefs nail-biter win over the Browns in the divisional round generated the most readership with over eight million page views the day after the game.

In a matchup of the legendary Tom Brady and the prodigal Patrick Mahomes, the quarterback who has generated the most readership of late has been…Matthew Stafford.

In a blockbuster trade the weekend before the Super Bowl and a rare starting quarterback swap, the Detroit Lions traded Stafford to the Los Angeles Rams for Jared Goff.

Looking at all sports topics during the seven-day period ending February 3rd, Stafford was the most read about player by a healthy margin. Brady easily surpassed Mahomes, who was also superseded by Goff and Green Bay’s Aaron Rogers. 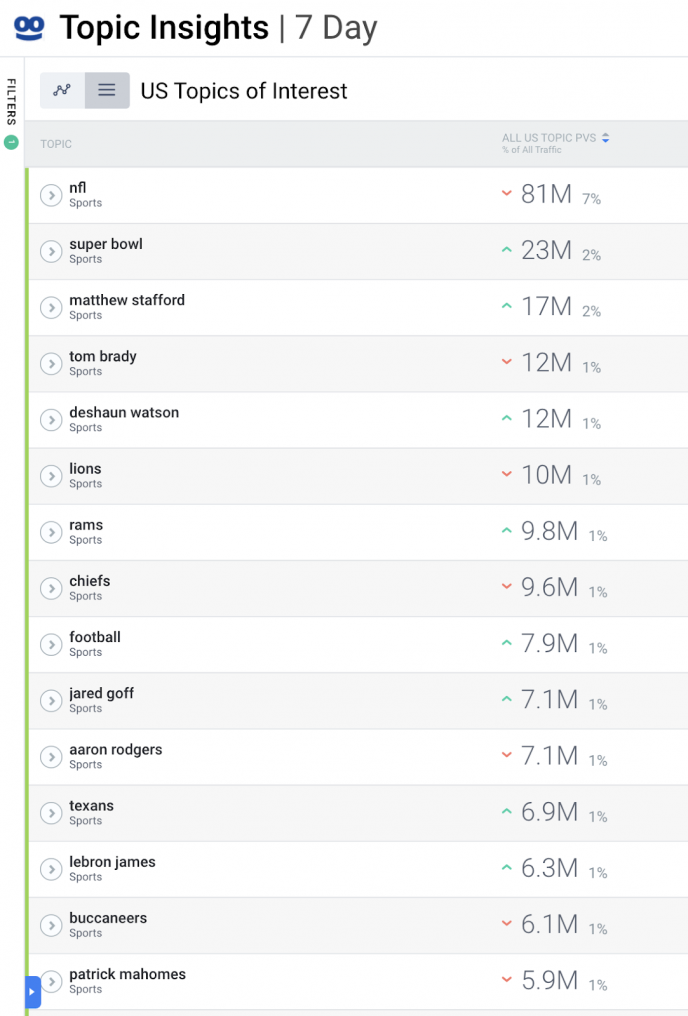 If we zoom out to look at a 30-day window, however, Mahomes moves way up the list, surpassing every other player except Brady. 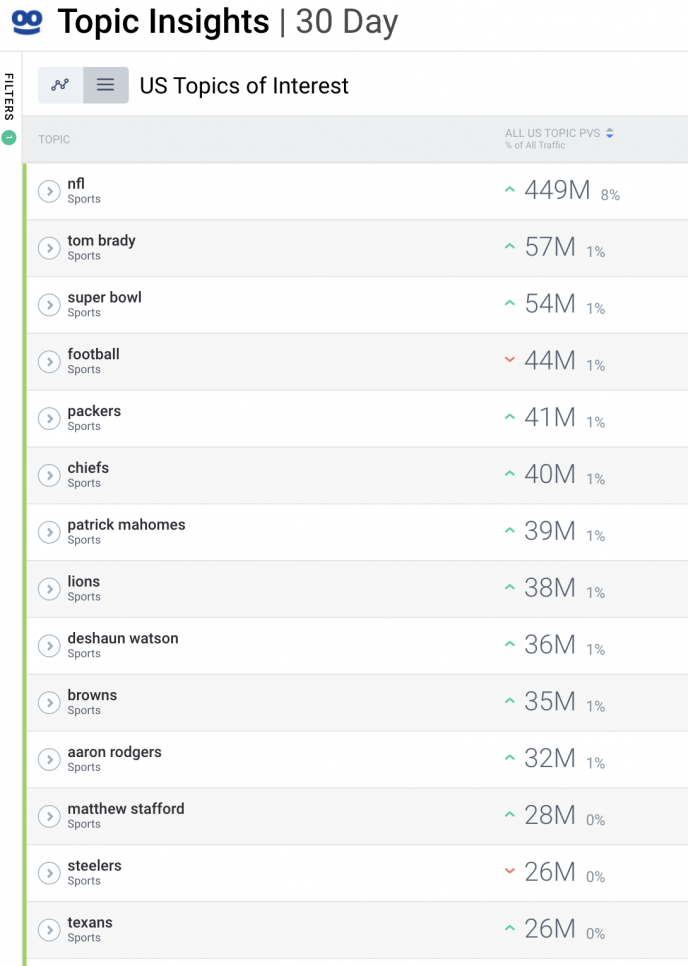 Coaches in the Spotlight

That doesn’t tell the entire story though. 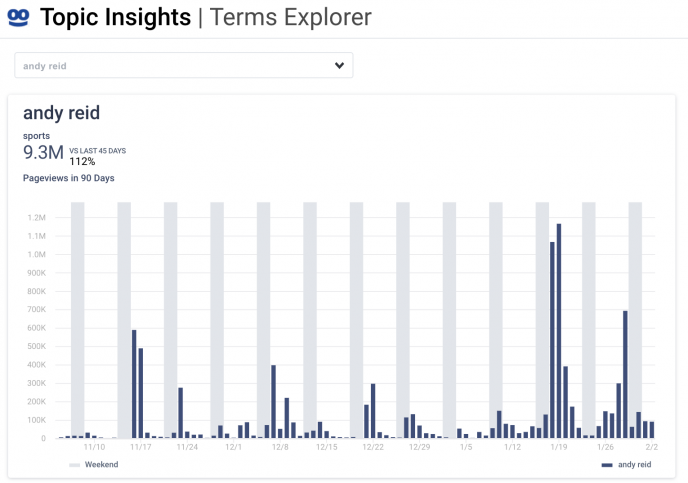 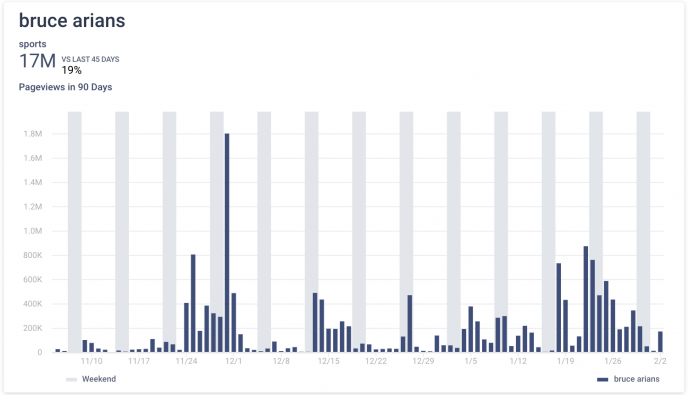 If we look at the daily charts, we can see Arians was getting the most attention in late November/early December amid boiling tensions between him and Brady.

Conversely, Reid has hit his stride with some bold decision making during the Chiefs playoff run en route to his third Super Bowl appearance as a head coach.

Neither Reid nor Arians have been the most attention-getting NFL coach though.

That distinction goes to Bill Billichick. Articles about the New England coach have received 19 million page views in the past 30 days (equaling Arians’ 90-day total) even though his Patriots missed the playoffs for the first time since 2008. 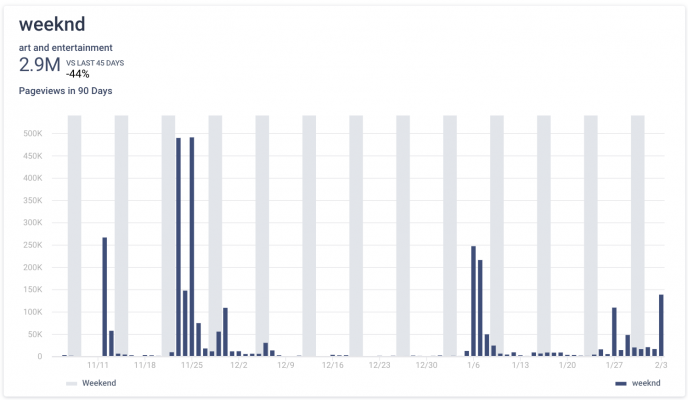 We all know the Super Bowl is more than just a football game; it’s a cultural event. This year’s halftime performer is The Weeknd.

This largest spike corresponds with comments The Weeknd made denouncing the Grammy Awards for his lack of nominations.

The focus was back on the Super Bowl in recent days though as he announced he’d be putting millions of dollars from his own pocket into what promises to be a “cinematic” halftime show.

Doing research or reporting on reader interest in news topics? DM @franberkman on Twitter if you think our readership data could help support your project.