This Pride Month, there’s a new meme making its way across the internet. And who’s at the butt of the joke? Advertisers.

Basically, people are making fun of how brands tap influencers to create campaigns that simply pander to the LGBTQ+ community with satirical tweets like:

These biting memes come from a place of truth, of course.

In fact, half of U.S. internet users are likely to view Pride-related merchandise as a marketing tactic instead of a true reflection of brand values. Even more striking, 17% of bisexual, gay, and lesbian consumers actually said they’d be less likely to buy from a company that features same-sex couples in an ad.

Why? They might just be suspicious of the true intent behind the campaign.

So, this Pride Month, the question is: How can brands make a real impact with their Pride Month efforts and avoid becoming another PR blunder?

We looked at the data to find out. 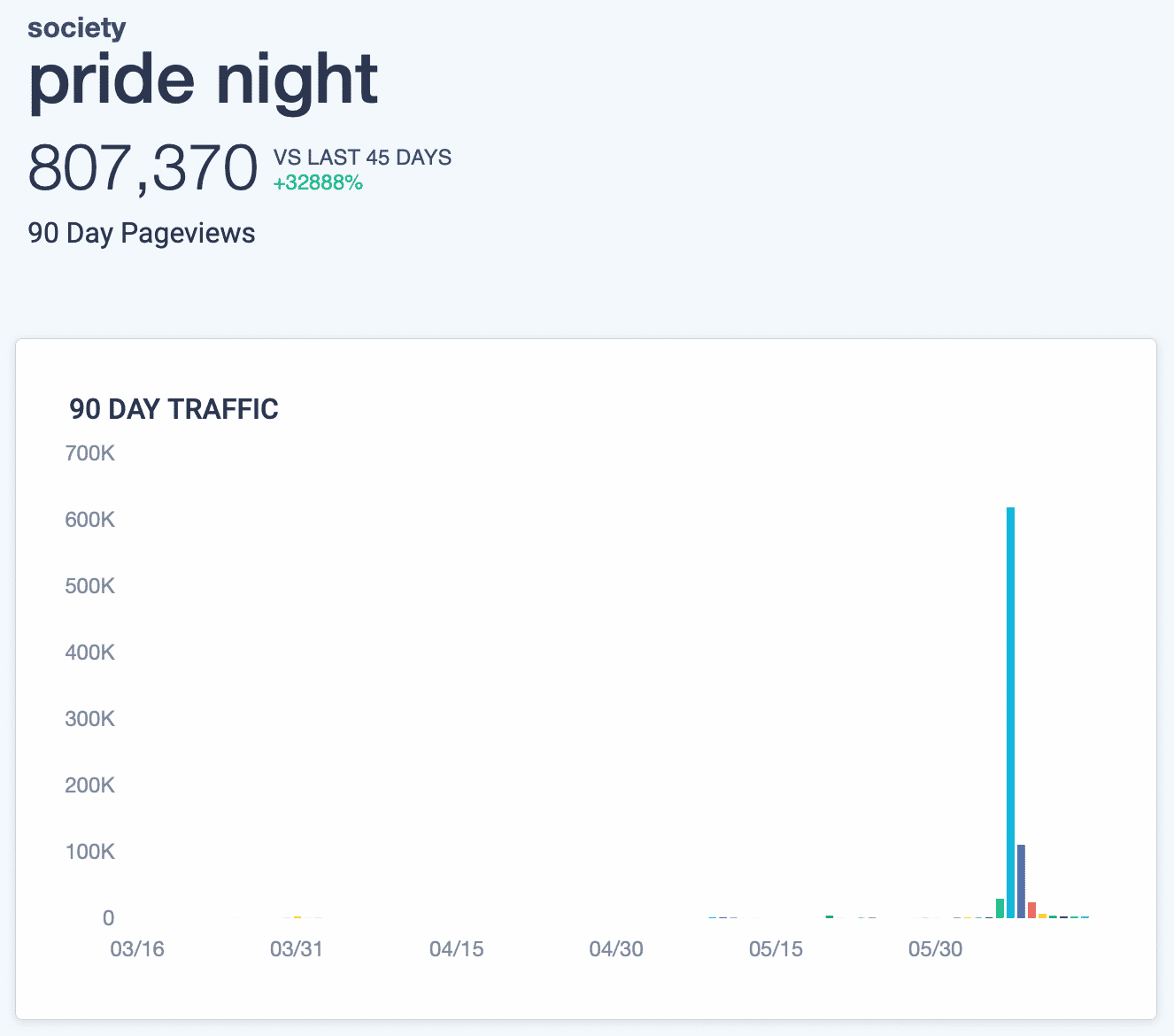 “Pride Night” is trending because Tampa Bay MLB players drew criticism for refusing to wear LGBTQ+ logo on their uniforms on the team’s annual Pride Night.

Meanwhile the Giants and the Dodgers unanimously showed their support for Pride on the big night.

ESPN also has a good explainer piece on Pride Nights in professional sports. 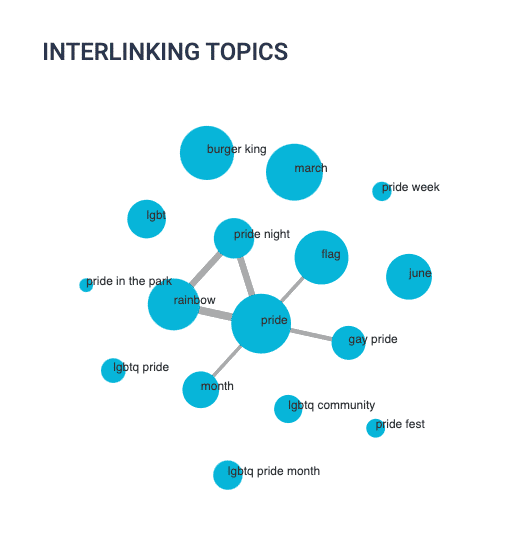 “Burger King” is making headlines for their Pride Whopper, which features two top buns or two bottom buns instead of the regular mismatched buns.

Naturally, publishers across the web have covered this, resulting in reactions on social media.

“Pride in the Park” 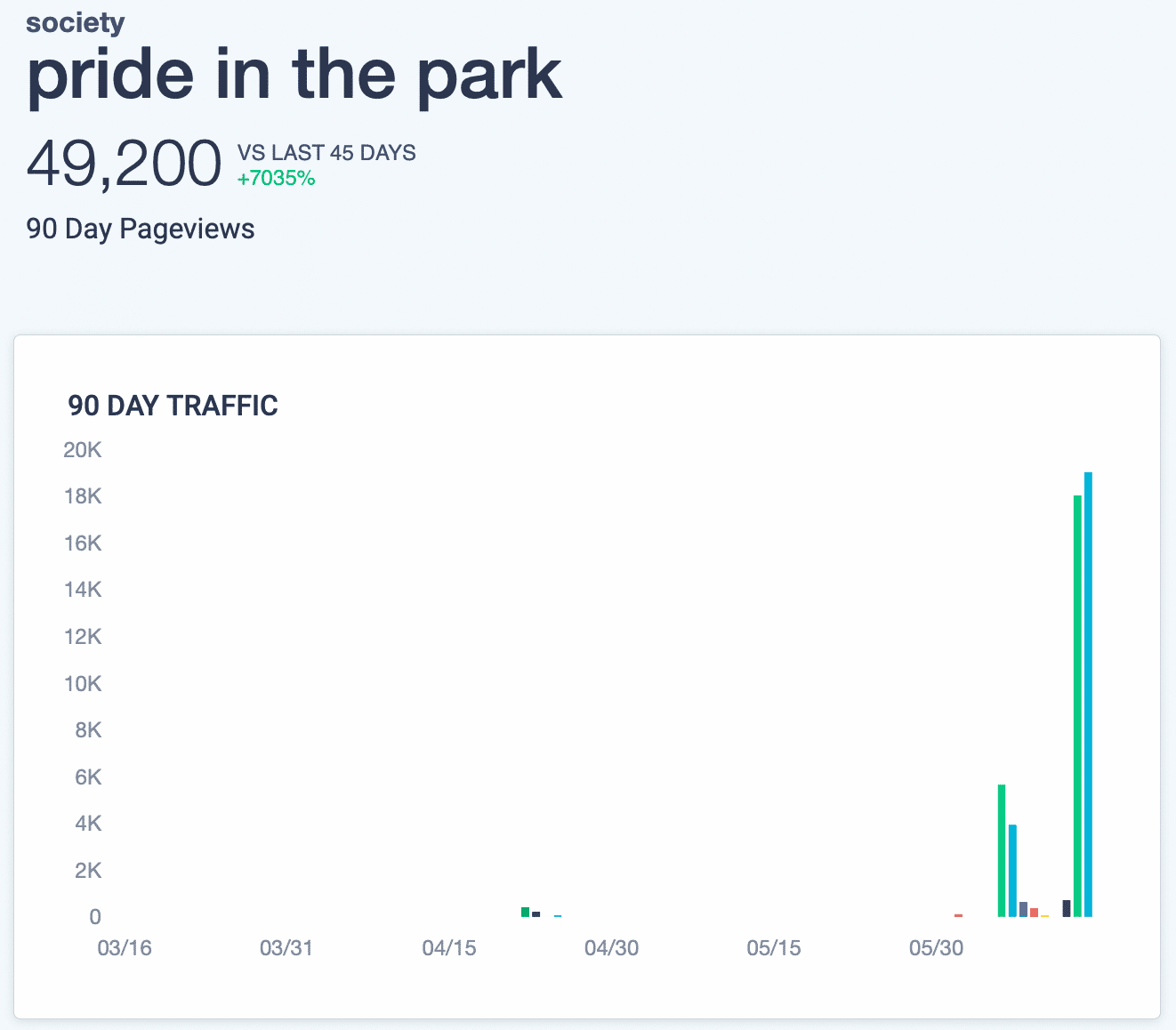 Cities throughout the U.S. are generating press for holding their own Pride in the Park events, and many are returning this year for the first time since the pandemic, like in Brooklyn and Norwalk.

Cities are also back with their “Pride Fest” parades, which was another trending term among our readers.

Tampa Bay tried to hold its own Pride Night, but the event backfired because its team members weren’t actually on board with the concept of Pride.

Brands can learn from this by promoting inclusivity from within, such as by celebrating the real stories of LGBTQ+ employees and building systemic programs that foster tolerance and acceptance.

Peloton, for example, is spotlighting LGBTQ+ workout instructors in its network and hosting Pride-themed classes in collaboration with certain music artists.

Last year, Taboola Pride hosted an internal online event with nearly 200 employees from across the world to celebrate our vibrant LGBTQIA+ community. This year in the U.S., Taboola purchased tickets for employees who want to attend Pride Island, the annual NYC celebration of Pride.

Make a year-round commitment to supporting the LGBTQ+ community

Burger King launched its Pride Whopper in Austria, but it quickly became an internet sensation.

Advertisers can succeed in creating the right kind of viral campaigns by making deeper and more authentic commitments to supporting the LGBTQ+ community — not just slapping “Pride” on their promotions or creating novelty products for June. Instead, they can advocate for and donate to causes that directly benefit LGBTQ+ communities.

Ugg, for example, is collaborating with nonprofit The Trevor Project for its Pride campaign and donating $125,000 to the organization.

Oreo is even redeeming itself by partnering with LGBTQ+ advocacy organization PFLAG National and collaborating on a Pride website of resources for the LGBTQ+ community and allies.

The press around “Pride in the Park” events proves that LGBTQ+ support thrives at the local level. As such, brands should embrace opportunities to launch localized campaigns and participate in community events as sponsors or donors.

Nordstrom, for example, will use the Center Stage at its New York City store to showcase retailers who are launching Pride initiatives, including Bombas, Happy Socks, Vans, and Toms.

Some small towns are even hosting their first-ever Pride events this year and they could be aided by support from neighborhood retailers who are willing to stand up for their LGBTQ+ communities.

Pride Month Campaigns You Can Be Proud Of

This Pride, don’t be the punchline of a meme. Be a true advocate by building campaigns, partnerships, and programs that make a real impact.

And, as always, use the data to guide you.

Whether you choose to celebrate LGBTQ+ employees, donate to a relevant nonprofit, or generate support at the grassroots level, remember that Pride is about more than just quirky products and rainbow-washing.

It’s about creating a culture of acceptance and understanding — not just from June to July but all year round.