There are more than 350 developers at Taboola, and each day dozens of changes are deployed to thousands of servers in seven different data centers around the world. Yet, our systems serve nearly 500,000,000 unique users every day and rarely experience downtime or a significant bug — all without any backend QA teams.

How do we do that? Keep reading to find out the secrets to how Taboola deploys and manages the thousands of servers that bring you recommendations every day.

At Taboola, we have two main process pillars we use in deployment to be efficient and ensure everything we release is high-quality. The pillars are divided into two main phases: pre-deployment and post-deployment.

What we do pre-deployment

We test every project, change, and code update pretty heavily at Taboola. We use a combination of automated, canary, AB, and side-by-side testing to ensure we only promote the highest quality code forward.

Almost every change we make, or every line of new code we add, must be unit tested in Taboola. Our CI/CD platform runs most of these tests automatically when changes are pushed to any feature branch, but it’s not the only testing we do. Automated tests are a good first line of defense, but additional safeguards are needed.

Wouldn’t it be great to test a new code version on a small fraction of users or traffic, so you don’t disrupt anything else in production? And if this small test only took a few hours to run, making it easy to do? That’s what canary testing is all about (named after the mining tradition of using canary birds to detect carbon monoxide in underground mine shafts.)

Taboola’s infrastructure is ideal for canary testing since it allows us to:

We enable canary testing at Taboola with a single click, making it an easy, efficient, and effective testing method for our developers.

A/B testing uses higher traffic volumes and longer time frames to obtain the data needed to be statistically representative of business-level performance. For example, an AB test may use 10% of overall traffic and run for a full week or two instead of 1% of traffic and a few hours like canary testing.

It allows Taboola to measure both system-level performance and business-level performance at the same time. And that gives us a better understanding of how the change would affect business metrics like revenues, clicks, and so on.

Even though canary and A/B testing are similar, we don’t always do A/B testing because it takes longer (a few weeks versus a few hours.) We tend to do more canary tests than A/B tests, but it’s easy for us to do both when needed.

Sometimes there are instances where automated, canary, and A/B testing will miss a coding error. For example, you might refactor a method to change its behavior but not its implementation and unintentionally introduce different outputs than was previously expected.

The previous testing types I mentioned may not catch the bug unless the new method throws more exceptions than usual. A/B testing might catch it if the bug impacts a business metric like revenue, but running one for a small refactoring change isn’t appropriate.

To catch these types of refactoring errors, we use side-by-side testing. It’s a type of testing with a short feedback loop and a high confidence level that can be done quickly. 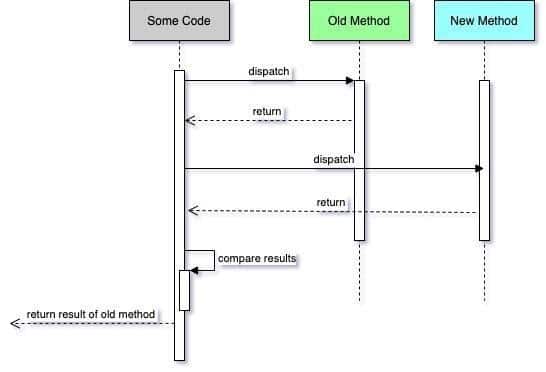 Side-by-side testing is a powerful tool but only works if:

It won’t work if you’re changing or adding behaviors or refactoring commands.

What we do after deploying

A Taboola developer’s work is not done after pre-deployment testing and rolling out the change in production. Post-deployment, we do a few more tests and checks to ensure new changes aren’t causing new issues.

For whatever reason, if a new change is causing all sorts of problems in production, developers need a way to disable it quickly or roll back the code to a previous version.

Doing a full code rollback is time-consuming and costly since it affects thousands of servers and all traffic. In a large-scale operation as we have at Taboola, every second counts, so a full rollback isn’t always the best option. We use it only in very serious cases and really, only as a last resort.

(And before you ask, feature flags are a cumulative thing in code, so managing them in a large codebase as we have at Taboola is a big task and a topic for another post.)

Another task we do after merging our code to master is tracking and verifying that our code didn’t cause any regressions in production. We don’t verify every change since we do so many every day, but we try to plan for the projects we know should be verified and what tools we’ll use to do that.

We store most of our raw data in BigQuery, Google’s cloud database, so we run queries there to verify the content we serve after deployment. But that’s not the only tool we use. We also use:

Keeping large systems, as we have in Taboola, alive and healthy while deploying dozens of changes daily is challenging. The size of our infrastructure environment and developer teams means we need to work collaboratively, test frequently, and monitor our changes even after deployment.

Taboola developers have a strong sense of ownership of their work, so they don’t just merge their code and forget about it. They use and participate in the various testing layers we have before deployment to ensure their code doesn’t break anything.

They also actively monitor their changes and quickly act when alerted to a problem. Our post-deployment processes ensure developers know how to efficiently fix a problem, so it doesn’t significantly impact the rest of the environment or ecosystem.

And that’s how we keep the Taboola servers up and running efficiently while still deploying all the changes and enhancements our customers love.