Are you ready for some football?

If you’re like us, you’ve been ready. Maybe you passed the long weeks of summer planning your fantasy football draft strategy. But how do you put together the perfect fantasy team? Do you crunch each player’s stats, or go with your gut? Search for underappreciated players, or make a rush for the stars?

We’re all about the numbers. So we concocted our own fantasy football draft, based solely on which players and teams rack up the most pageviews. After all, the players people are reading about online must have something going for them, right?

Below, we’ve compared our top pageviews picks to NFL.com’s draft breakdown. For clarification, players and teams who have a N/A next to their name in the data mean we have not seen a sufficient amount of articles published about them across our US network.

Would a draft based on pageviews alone create a winning team? You be the judge.

If you’re a publisher, the bruisers at the top of the Taboola draft should be the focus of your coverage. They’re the ones people are paying attention to this season. And if you’re an advertiser, know that the publishers that belong to Taboola’s Premium Sport Package, including ESPN and NBCSports, have their eyes on the ball — and the eyeballs on their content.

Our fantasy football draft is fun, but it’s not just for fun. Studying which players top the ranks gives us insight into what types of articles earn the most traffic, and therefore, the most ad revenue. 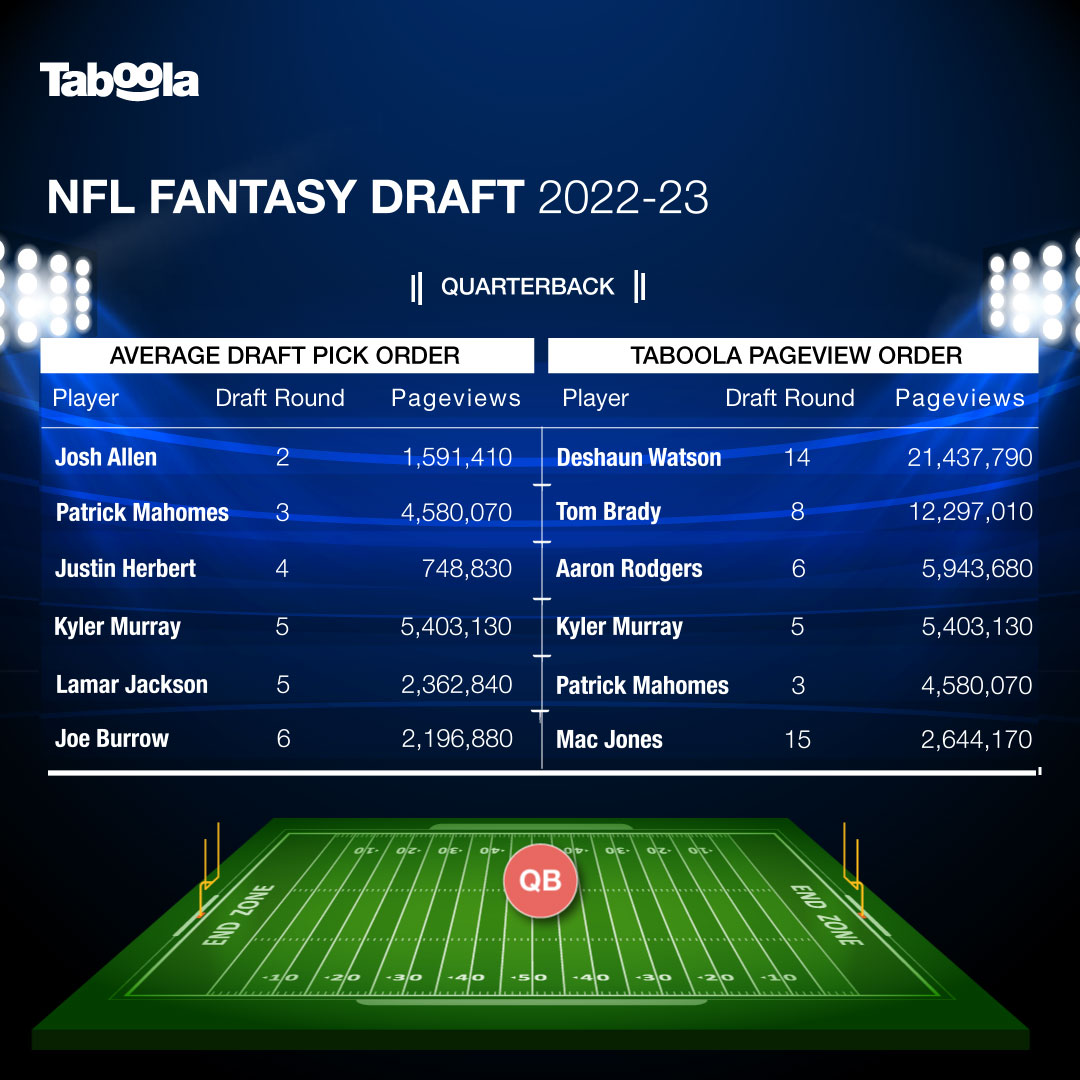 Setting multiple NFL records in 2021 — first quarterback with 100 touchdown passes and 30 rushing touchdowns in his first four seasons— it’s easy to see how the Buffalo Bills’ Josh Allen gets tapped in the early rounds of fantasy football drafts.

And yet, Allen isn’t the QB with the most buzz online, by a long shot. That distinction (dubious in this case) goes to Deshaun Watson, with 21,437,790 pageviews. It’s not his forward pass that keeps the Cleveland Browns QB front and center, unfortunately. It’s his alleged behavior; Watson is serving a suspension due to multiple accusations of sexual assault and sexual misconduct.

If you’re looking to cover players who perform well on the field and pique viewer interest, look for the crossovers in these lists — those who rank high on both the Taboola pageview draft and the average fantasy draft. Patrick Mahomes pulls that off, getting drafted in Round 3 on average by fantasy managers, and ranking in the Top 6 for pageviews. And that’s no wonder, when the Kansas City Chiefs quarterback routinely passes for 300 yards in a game and makes trick shots that become viral videos. 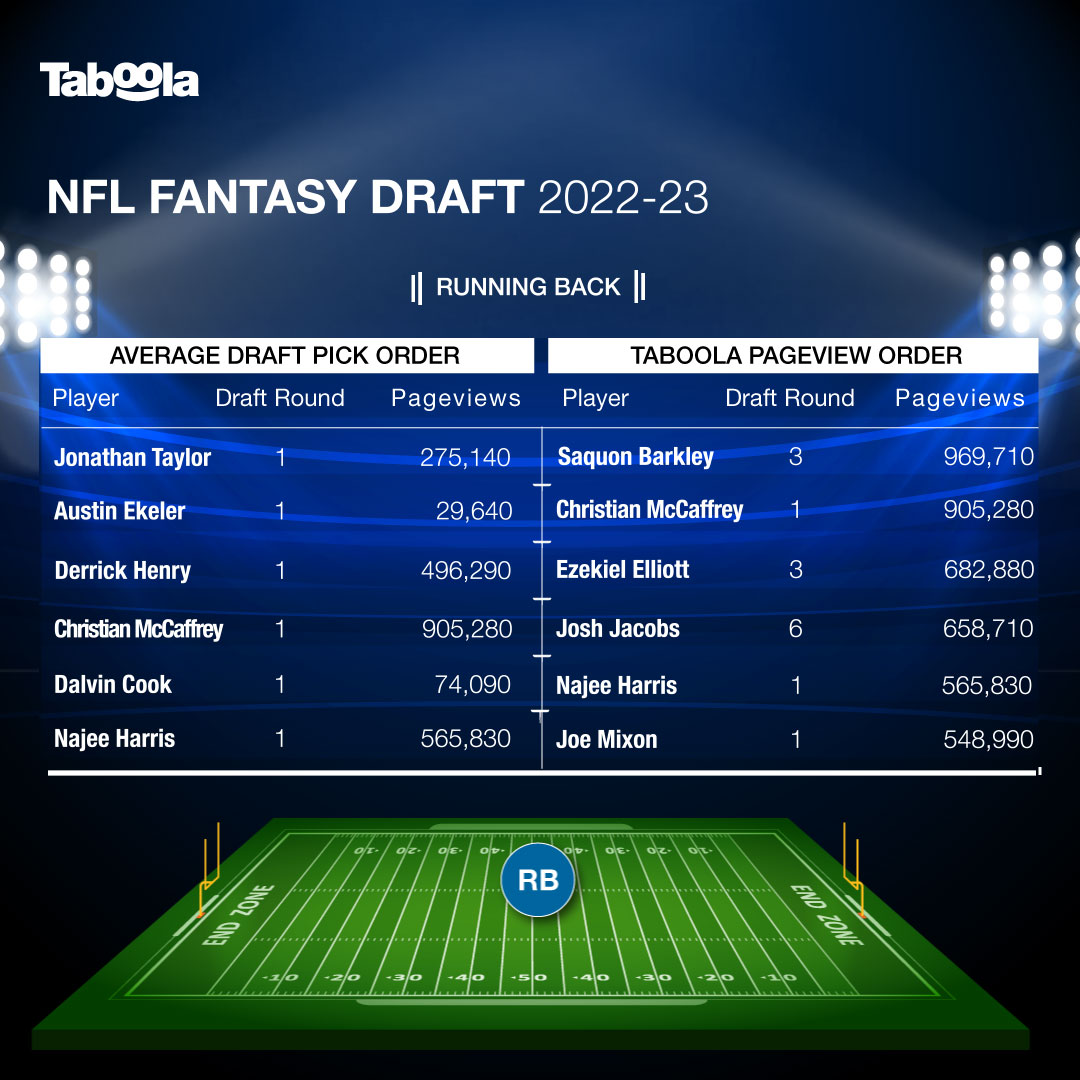 Picking a running back first is a popular fantasy football strategy, so it tracks that all six of the most popular RBs are commonly picked in Round 1. But some of the players with the most pageviews don’t typically get picked first.

Take Saquon Barkley, who fantasy managers might avoid due to his serial injuries. The New York Giant’s top ranking in pageviews may be due in part to excitement over a prospective healthy comeback, but trade rumors and his own outspoken reaction to criticism probably help too.

For crossover coverage, you can’t go wrong focusing on Christian McCaffrey, who almost always helps fantasy teams win — when he’s healthy. The Carolina Panther also garners a lot of pageviews, perhaps because his injuries put him in the news. 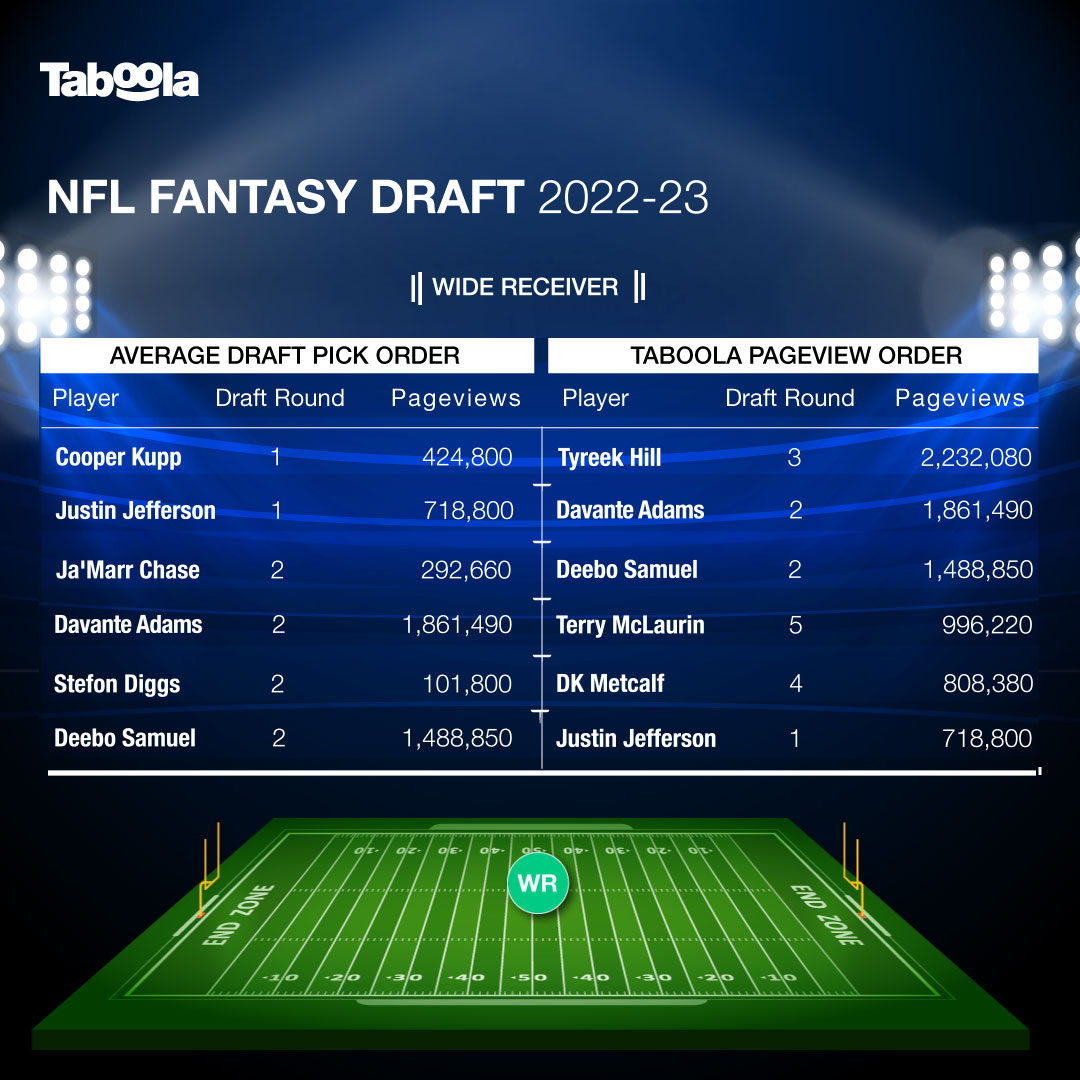 Why is Cooper Kupp so often picked first in fantasy drafts? Well, when you’re a Super Bowl MVP, an Associated Press Offensive Player of the Year and win the receiving triple crown, that kind of thing tends to happen.

Despite his on-field achievements, the LA Ram isn’t anywhere near the top of Taboola’s draft picks. Based on pageviews, we’d draft Tyreek Hill first. Recently traded to the Dophins by the Chiefs, Hill tends to grab attention with controversial comments. But as with QB Watson, a lot of attention isn’t always positive; some of the coverage people view about Hill is about his past domestic violence allegations.

To hit the sweet spot between performance and audience attention, shine the light on Davante Adams and Deebo Samuel. Both get drafted in the second round on average. Adams, a favorite due to his solid performance on the field, is probably getting more attention since the Green Bay Packers traded him to the Raiders.

Samuel recently joined the ranks of the Top 20 NFL players, and off the field he’s been the subject of interest due to his contract negotiations with the San Francisco 49ers, not to mention some personal gossip. 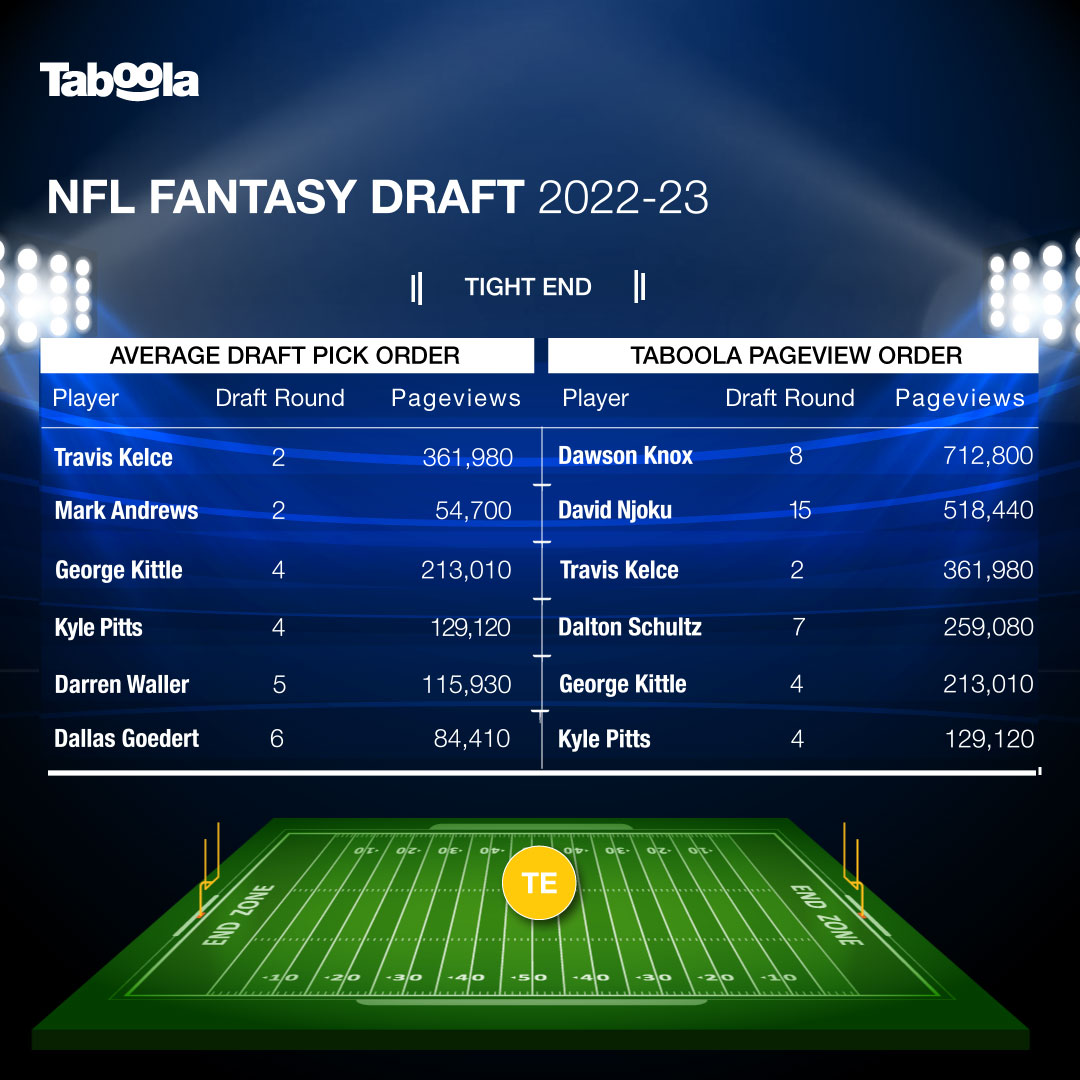 Tight ends don’t get picked up in fantasy drafts as quickly a QBs, running backs and wide receivers. But Travis Kelce and Mark Andrews do better than most, both going in the second round on average. Andrews has worked his way to the top of the draft by improving his game every year for the Baltimore Ravens, but he’s no pageview star. Kelce, on the other hand, is a crossover success. His prowess on the field wins him peer recognition as one of the Top 10 players in the NFL, and some even call him the best tight end ever. Off the field, he gets attention with his business and charity ventures. 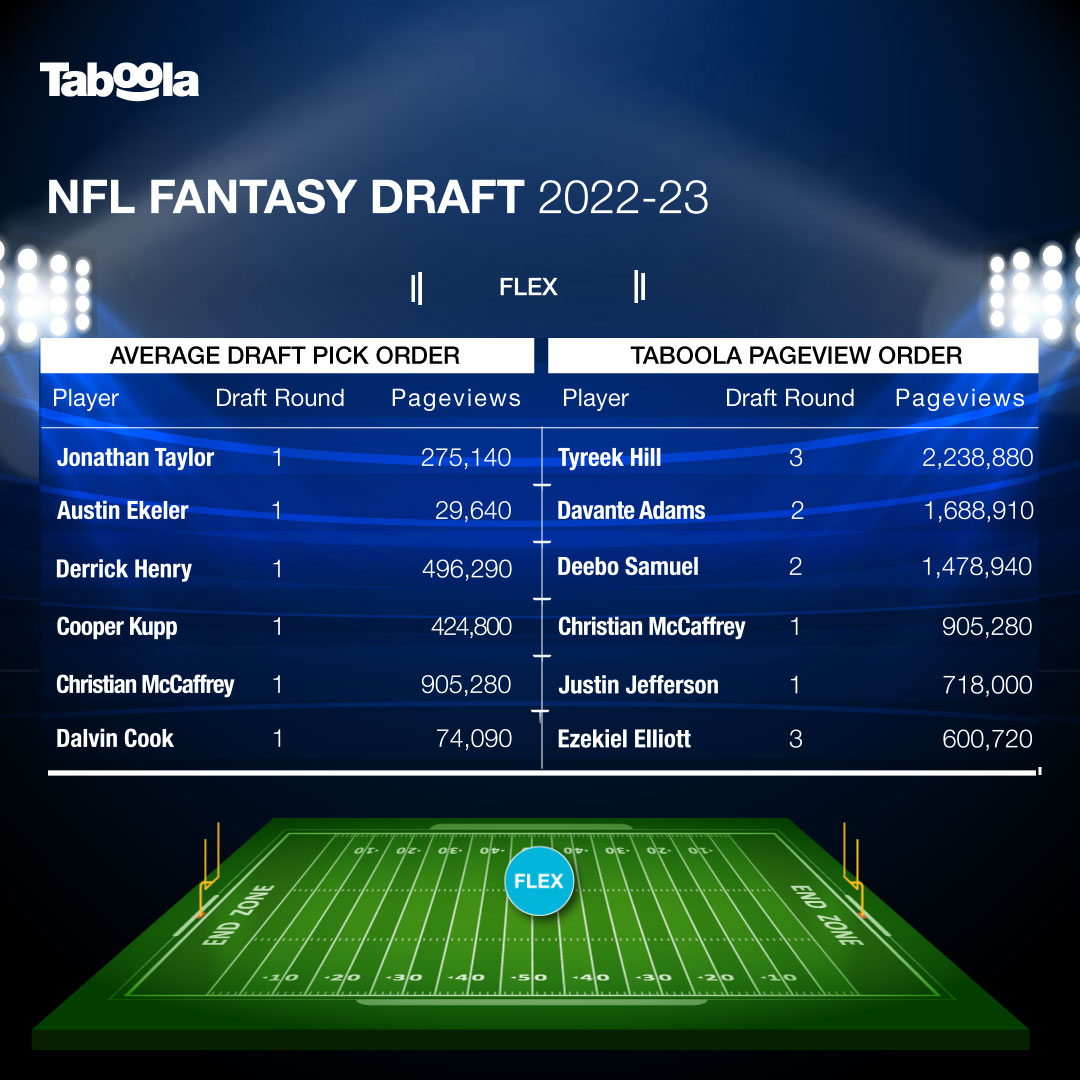 When filling out a fantasy football team, your flex spot is your ace in the hole, generally a chance to add a running back or wide receiver.

It seems that wide receivers get more pageviews than running backs. In Taboola’s pageview-based draft, the Dolphins WR Hill comes up on top (as noted before, due to controversy), followed by solid receivers Adams and Samuel.

Once again, Adams and Samuel are the best picks for crossover coverage, with solid rankings on the field and on the Internet. 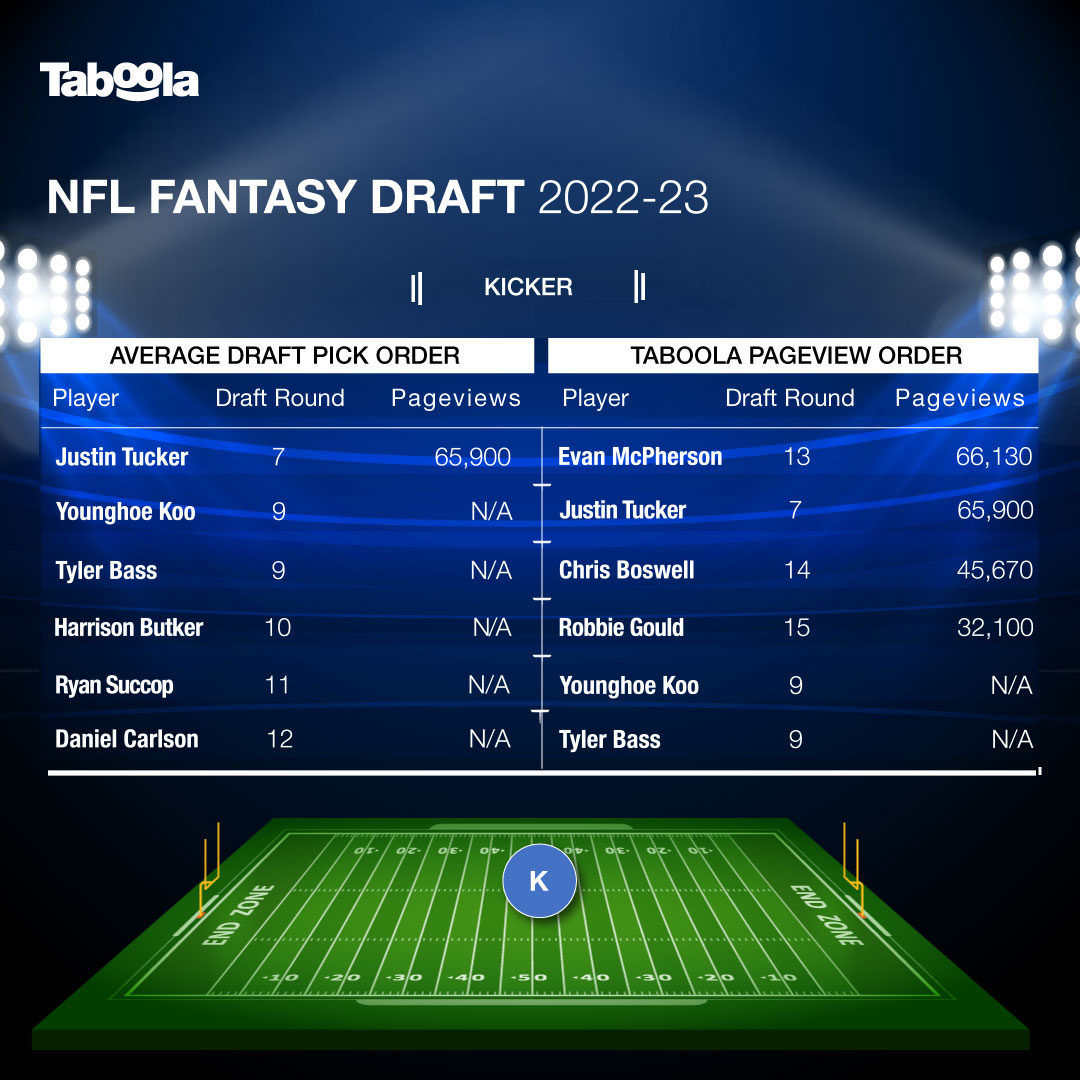 Like Rodney Dangerfield, kickers don’t always get much respect. They tend to get picked later in the fantasy draft, with the highest-ranking kicker on this list, Justin Tucker, going in round 7 on average.

And on pageviews? People just don’t Google a kicker’s name that much. The Cincinatti Bengals’ Evan McPherson is wildly popular — for a kicker — but even he only gets 66,130 pageviews as the No. 1 pick in the Taboola draft. That’s orders of magnitude less than the top view-getting players in every other category. And many of the kickers we looked at don’t register at all.

For crossover coverage, go with Tucker. He has almost as many pageviews as McPherson, and ranks higher on fantasy rosters. 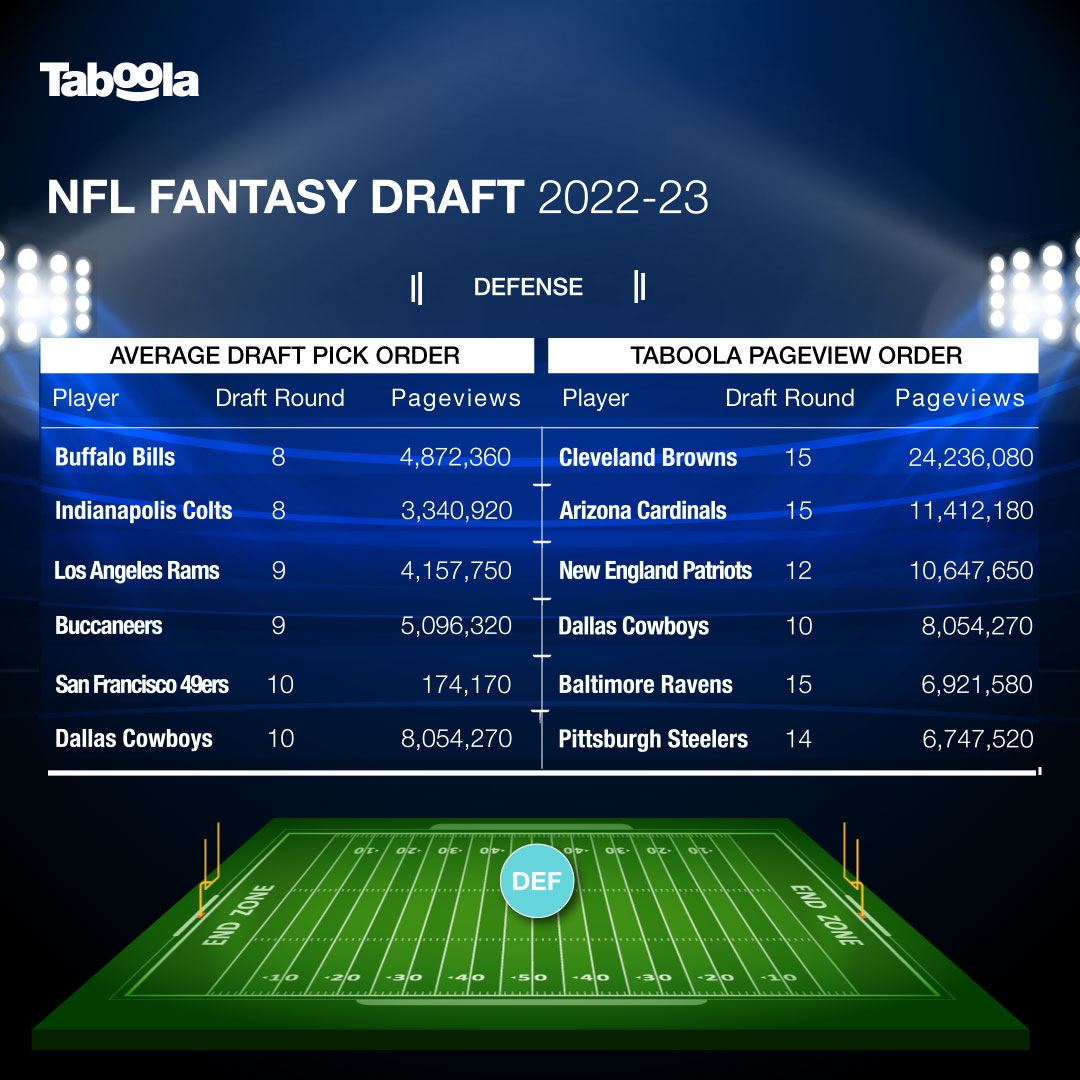 Managers generally choose a whole defense for their fantasy team during the second half of the draft, so you won’t see any Round 1 or even Round 5 choices here. When they do get around to picking a defense, a lot of people choose the Buffalo Bills, who were good defensively last year and made some great additions in the offseason. Equally popular are the Indianapolis Colts, who have also added talent since 2021.

But none of the defenses that fantasy managers love get as many pageviews online as Taboola’s top pick: The Cleveland Browns. Maybe that’s because news reporters find more to say about the negative, and the Browns’ defense clearly needs work.

If you want to focus coverage on a defense that performs well and gets a lot of attention, it’ll have to be the Dallas Cowboys. At No. 10 in the average draft, they’re no slouch as a fantasy pick. And their relative success with pageviews is probably based on their overall popularity as “America’s Team.”

In the end, it turns out that crafting a lineup using pageviews alone might not propel your fantasy team to the Super Bowl. While many players earn lots of pageviews due to their on-field achievements, others get them through controversial comments or even bad behavior.

But for publishers and advertisers, there’s a clear middle path through all of these statistics that leads to fan-pleasing coverage and higher sales: You can’t go wrong featuring the players who both achieve and entertain.