This opinion piece reflects a Taboola employee’s personal views and reflections about the Black Lives Matter movement and its significance within the advertising and associated adtech industries.

As a series of events have unfolded in 2020 dealing with a global pandemic and, simultaneously, the Black Lives Matter movement, America and the rest of the world are having to realize injustices still prevail. An unexpected source of support that has left many with questions and surprised is the support from corporate America. 2020 has proven to be an interesting year where companies appear to be rallying around the movement and showing solidarity, candidly.

We’ve seen major advertisers donating to causes and issuing statements on their social media channels explicitly saying that they support Black Lives Matter. One has to remember this movement was created in 2014 and no corporation would have dared to say anything back then, so why have they started to now? Corporations are often on guard when it comes to topics that seem to have conflict or appear to be polarizing—they’re wary about associations that may deter consumers.

Advertisers are typically known to avoid addressing topics like politics, violence, and even recently the coronavirus. The aftermath of George Floyd was different; you saw corporations publicly denouncing racial injustice and police brutality.

With Millennials and Gen Z making up the largest consumer group today, this particular demographic cares about brands being associated with social causes, and advertisers know that.

Being aware of this consumer trend, advertisers are pushing “values and identity driven targeting marketing,” a term coined by Americus Reed, a marketing professor at Wharton School at University of Pennsylvania.

By matching corporate values with consumer values, advertisers are hoping to build a sense of loyalty and a deeper sense of personal connection, Reed explains. Consumers during BLM have expected more from bands, and socially conscious advertisers caught on—a recent poll shows that 67% of young people believe that brands should be actively involved in Black Live Matter movement, and with this sentiment, consumers will be more critical on advertisers moving forward 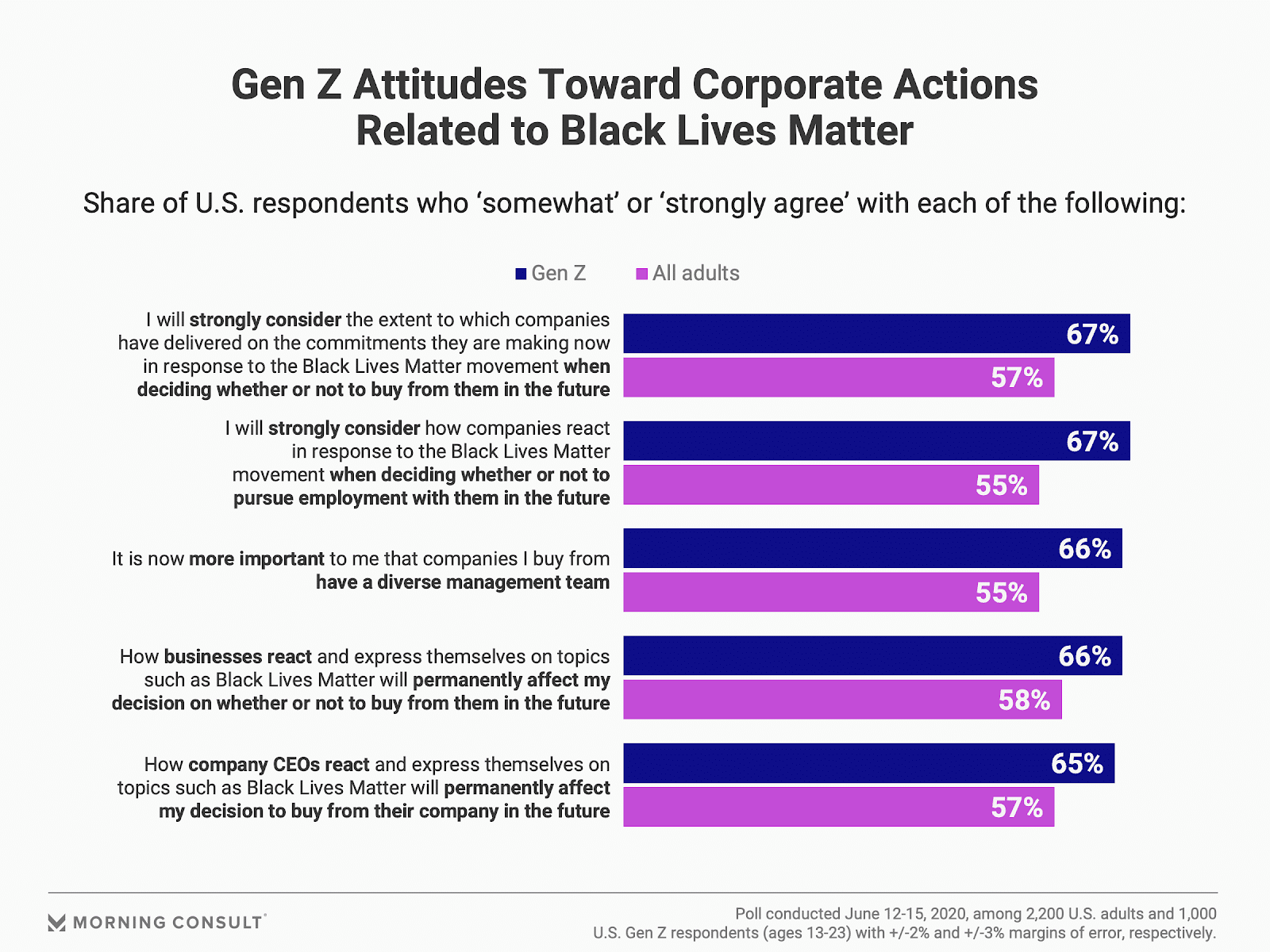 As Millennials and Gen Z become the focal group as advertisers look to grow their loyal consumer base, it needs to go further than just denouncing systemic racism—companies need to look inward, too.

Advertisers have their own social responsibility to build and champion for diversity within their own organizations. There has been an upward trend where employees have been calling out executives in C-suite to do more than just state their solidarity for the movement, but examine how they play a role in the problem.

The “monolith” culture prevails in agencies, which prompted 600 Black advertising employees to address the industry through an open letter demanding change.

The letter was pushed by Nathan Young, a group strategy director at Periscope, and Bennett D. Bennet principal at Aertiallist, a new consultancy group he founded.

In it, they outline a 12-point action plan for agencies to improve the workplace for Black, Indigenous and People of Color (BIPOC) employees. Members calling for action from agencies is a direct result of how inaction has created a non-inclusive work environment.

When it comes to true diversity and inclusion individuals are not looking for lip service, but actual change starting with the top. “The conversation is very old,” says Keni Thacker, founder of 100 Roses from Concrete, a network for men of color in advertising:

“A lot of us have been trying to change the conversation. But still it seems like those things have been falling on deaf ears over the years. I want to see where we are a month from now, six months from now, a year from now.”

The call for change and diversity in agencies is not new at all. Often, diversity and inclusion positions are created, but no actual change occurs.

Individuals who are tasked with this problem do not get the support and resources that they need from the top. The effort of creating an inclusive and diverse organization has to be a joint effort—it does not rest solely on a few individuals.

“These efforts don’t make a difference because they rarely have the full weight of the company behind them,” remarks Lindsey Day Farrar, president and editor-in-chief of CrwnMag, a full-service creative shop that helps brands connect with Black women.

Diversity officers need resources to really mitigate the increasing problem that agencies face when it comes to diversity and inclusion.

Tech has forever been on the quest for diversity and inclusion, and that quest is far from over.

Many tech companies have put resources into allowing employees to create employee resource groups (ERGs), partnering with organizations that are tech-related, and hiring diversity officers. These joint efforts, however, don’t address the actual issue that still persists in tech.

At first, advocates were focused on calling out the lack of diversity at tech conferences, and companies shifted their focus into the “Diversity Playbook,” implementing unconscious bias training and releasing their diversity stats. This clearly shows a pipeline problem, which needs to be addressed.

It’s worth noting that all of these joint efforts are not always productive, because the issue still remains. Corporations often think that trying absolves them, but that calls for introspection because trying is not really addressing the problem—it’s simply just a start.

“We’re past the window dressing stage and now it’s time to talk about accountability, consequences, promotions…and what it means to prioritize things to make sure the industry is not inhospitable”, says Karla Monterroso, founder of Code2040, an organization that’s mission is to close the opportunity gap for Black and Latinx people.

Yes, efforts have been made, but the industry is a reflection of society’s issues pertaining to race, gender, class, ability, age, and sexual orientation.

Now, knowing this reality, there is opportunity to create actual concrete change in the industry from executives holding themselves accountable, employees amplifying their voices, and investors demanding change.

What needs to be done first is commitment and accountability from the top—it’s no longer an option. The industry needs to understand implementing a single unconscious bias training and simply hiring a diversity & inclusion officer will not move the industry in the direction it needs to go.

Pushing for more diversity and inclusion often comes from employees rather than top executives, which is not surprising.

“It starts at the bottom because those are the people who often have the most to gain by pushing for changes in company culture,” explains Iliana Ortega, strategist at Publicis in New York.

Corporations should make safe spaces for discussion to give marginalized individuals freedom to speak candidly on the issues at hand. Companies need to understand that the role of dismantling and addressing systemic racism does not entirely rest on employees—it’s imperative that leaders within the organization are accountable for educating themselves and actively participating for change within the work org.

Educating yourself on such topics is not hard, after all, with the open web at anyone’s disposal.

A message to leaders everywhere: be a part of the solution and take on responsibility for your shortcomings.

Facing this challenge calls for listening, learning, and undoing old ways of approaching such matters. Make a genuine effort to address and understand systemic racism. Start the conversation and follow up with an actual plan, and hold other leaders accountable.

Starting can be a bit overwhelming, with many not really knowing where to start, and such changes don’t happen overnight. Many leaders are cognizant of that, and therefore start where they can, but it’s important to remember the actual change starts from the top and others will follow.

It starts with leaders holding themselves responsible, and then looking at their organization as a whole. Leaders, ask yourself this: Have you avoided candid conversations about racism in the past? How diverse is your leadership team?

In this moment, it is imperative for leaders to do a self-reflection and to acknowledge and be accountable for any shortcomings.

It’s important that if advertisers, agencies, and even tech companies are serious about Black lives, that they show it by action. Otherwise, it’s talk—performative talk. It will remain a problem, rather than a long term solution. I want to see change in the industry as a whole, and be able to mark the changes by month, quarter, and year.