No digital marketer can deny “content shock.” The volume of content produced outpaces the market’s ability to consume it to an insane degree. Consequently, very few companies come close to generating the level of traffic they seek via organic search.

The popular social channels are also flooded. So, no digital marketer can deny that achieving reach via organic social grows harder everyday. Algorithms often decide what social feeds contain and it’s no secret they favor the content produced by friends and family.

Banner blindness is another undeniable problem. Some go as far as to say you’re more likely to get struck by lightning than click on a traditional display ad. Yes, it’s an exaggeration, but if you place a heap of chips on banner advertising you’re unlikely to walk away a winner.

“If content marketing is the hero of the modern marketing story, then banner ads are most certainly the villain.” ~ Michael Brenner, founder of Marketing Insider Group. (Banners Have 99 Problems and a Click Ain’t One)

Eek. What’s a content marketer to do?  One potential answer—and it’s no secret—is to invest in native advertising, but it too comes with risks. Its various flavors often confuse marketers working to increase brand awareness.

I decided Chad Pollitt, one of the world’s foremost experts on the topic, could help clarify a number of issues swirling around the state of native advertising today.

Chad is the co-founder of Relevance, a marketing professor at Indiana University and Rutgers, and a former partner at the Native Advertising Institute. I was excited when he agreed to record an interview with me and learned a lot in the process.

Check-out the 20-minute conversation we had in the video below—or read the highlights that follow, if you rather.

Here are some of things Chad and I discussed:

By 2021, native display ad revenue in the US, which includes native in-feed ads on publisher properties and social platforms, will make up 74% of total US display ad revenue, up from a 56% share in 2016. Source: Business Insider

Barry: Chad, What are your thoughts about the explosive growth of native advertising?

Chad: Some of our listeners, readers, watchers of this are familiar with the concept Google came out with called ZMOT, or Zero Moment of Truth.

In 2011, Google published a study (they had a third party do it). What they figured out was that people in their buyer’s journey are taking the time to actually do a search, get on an app or get on the Internet somewhere and do a little bit of research before they decide to purchase something. That’s called the Zero Moment of Truth.

What they found out was last decade, especially early in the decade, people would leave reviews, they’d write blog posts about products and services, and things like that. Brands had to decide, “Are we going to help shape the stories people are saying about our brand, products, and services, or are we just going to let them do it?”

The vast majority of brands said, no, we want to have a say in this; we want to tell our story. And that created modern-day content marketing as we know it.

Prior to the Zero Moment of Truth, most brands prioritized their content production at the bottom of the funnel and worked their way up. It was almost like a reverse funnel.

We all know the buyer’s journey is not a reverse funnel. For the most part, brands today are prioritizing their top funnel content.

The problem is distribution priorities have stayed at the bottom of the funnel. So your pay-per-click, your display advertising is typically more lower funnel (aimed at making a sale).

Since content marketing has forced brands to produce more “top funnel” content, what we’re seeing is that native advertising is the channel to help it (boost reach).

When you’ve got things like PPC ads on Google for car insurance or plastic surgery, you’re looking at click-through costs of $75 to $125. Nobody’s going to spend that much to promote a blog post. So the pressure is real. It’s helped to create and grow native advertising as a preferred channel of distribution for top funnel content.

Barry: So content marketers are struggling and if they are late to the party, like they’ve joined the party with blogs and vlogs and so forth in the last couple of years, they’re seeing an intense amount of noise and competition.

The idea is search and social are not going to scale to the degree that you would like because it’s so difficult. Is that right?

…And that’s the combined audience of all the publications and blogs out there that utilize these native advertising units.

So it’s a viable channel if you’re willing to use paid media to distribute your content and get in front of those people that otherwise you might not be able to because search and social is so saturated.

Barry: In your study and ebook, The Global Guide to Native Advertising Technology, you mapped-out an infographic showing all the entrants that are flying into this explosive industry.

I’m quoting you here: “It’s about time that the nearly 300 native advertising technology companies cater to content marketers.” Can you expand on that idea? 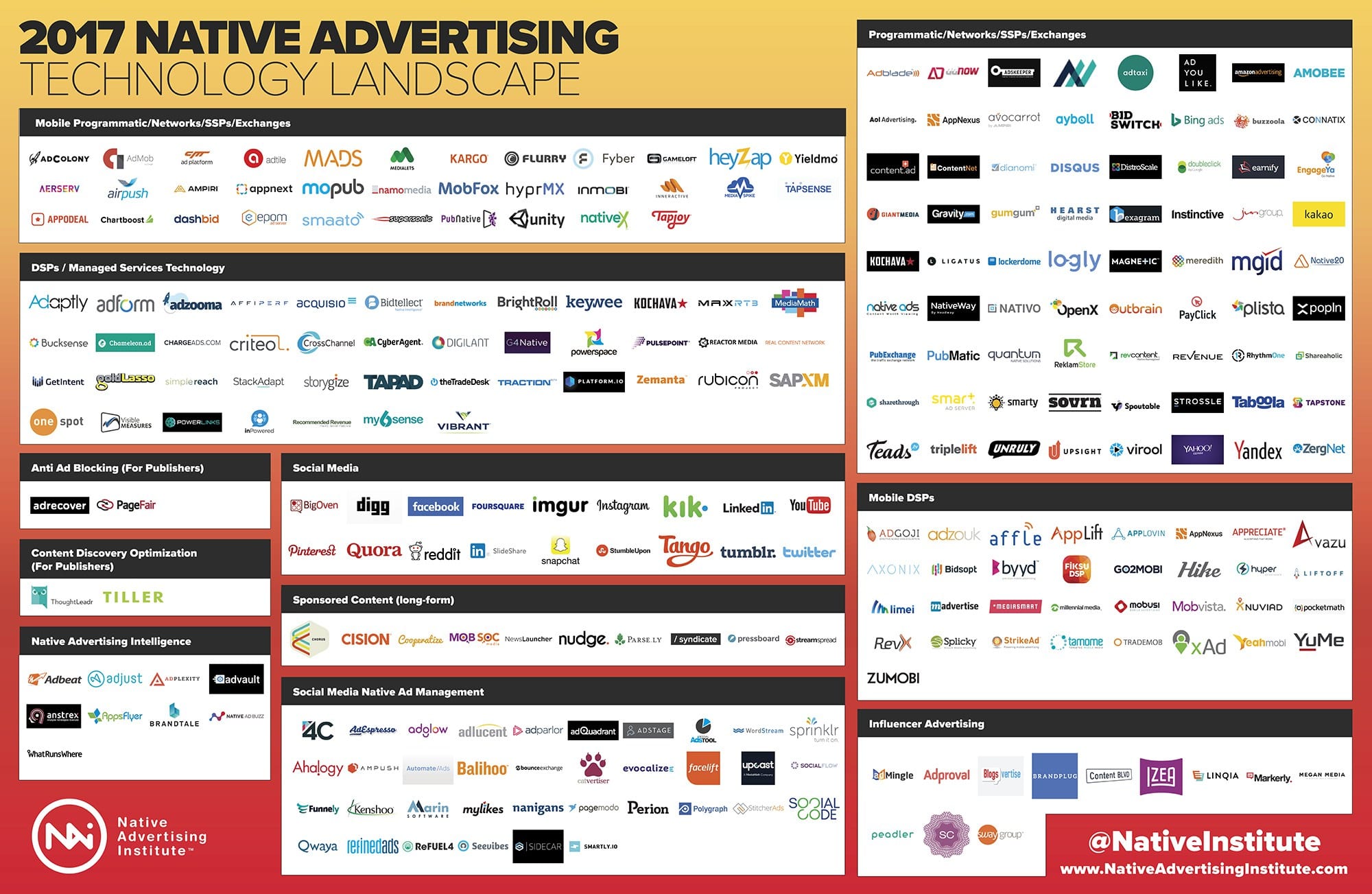 Chad: That research was a year ago. I just finished this year’s research and the number currently sits at 402 native ad tech companies. So it’s grown substantially since last year.

What I mean by that is, some of the tactics they’re using, like clickbait, and racy images, and the impressions games that they play, where you click through and there’s a list of 40 things and you’ve got to click on 40 different pages to go through it, so on and so forth….

A lot of that’s getting cleaned up now and companies like Taboola, for example, have solutions built where publishers can actually crank that stuff down and get rid of it.

But to truly cater to content marketers, what we want is engagement with our content. What I’m starting to see in this space are companies leveraging CPE models, or Cost Per Engagement, as opposed to CPM, CPCs and CPAs. We’re still in the early stages, but they’re starting to appear.

Barry: Native advertising takes many forms. In fact, in some of your writing you’ve identified what those forms are (Reference: The Native Advertising Manifesto). The one that makes sense to the audience that wants to learn more about the Taboola platform is called “Content Discovery Platform.” Is that right?

Chad: Yeah, for those that don’t know…

You’re at a new site—or it could be any site—but you’re at one of the sites that you go to in an effort to collect information. Beneath the content that’s been created in-house are sponsored ads below: that’s content discovery.

It’s not exactly the same as social media native advertising although the model remains the same. The idea is the ads look like the media in which they appear.

Barry: What brands would you recommend get into native advertising that haven’t so far?

Chad: Businesses are in the business of solving people’s problems. That’s what they do and why they exist. That’s what fundamentally macro-economically makes them different from households and governments.

So the content that brands produce needs to reflect why a company exists—to solve people’s problems, at the top of the funnel. Well, also in middle and bottom, but since we know content priorities have moved more up-funnel, we’ll focus on that for now.

If a company is producing that type of content—helpful content at the top of the funnel—they need to be investing in paid content distribution through native advertising. It’s the best channel for top of the funnel content.

Companies can start with Taboola. They can start with Facebook. They can do a combination. There are lots of solutions out there, but I definitely recommend to start thinking more like a television ad executive.

What I mean by that is, for every $1 a television ad exec spends on creative, they’re spending $5 on distribution. Content marketers do the opposite and that’s a problem.

We need to stop thinking only like content marketers… “Our creative is so amazing… It’s going to accomplish everything we need on its own.” We need to start thinking like television ad executives and put our money where our mouth is.

Barry: What objections would you expect to hear from somebody? You mentioned there’s a bit of a bad rap for click bait.

Chad: That’s definitely one. One of the biggest things I hear, especially at bigger brands, is distribution is siloed. I’ve had a lot of executives tell me they basically have to go beg the media buying department or the PPC team to do these campaigns for them.

The problem with that is you’re separating creative from distribution completely. So there are some things that can get lost in translation.

Content marketers need to have their own budgets and do their own distribution, in my opinion, to maximize success.

Barry: What about confusion? Where do I begin? Who do I put my trust in?

Chad: That’s another biggie. One of the reasons I did the whole project to map the landscape is to create some method to the madness.

With over 400 native ad tech companies out there, that’s a big pool to dive in. So by categorizing them, identifying them, I hope to make it easier for people to be able to navigate that landscape and figure out what are the best solutions. Taboola is a great place to start. They have the experience. They have the reach. They have the network.

Taboola, Facebook, there are others, but don’t just dip your toe in the water—jump in.