Advertiser success is one of Taboola’s main goals as we want to help our advertisers gain the most out of their investment with us.

Two metrics advertisers use to measure that are Cost Per Action (CPA) and Conversion Rate (CVR). A high CPA means they’re spending too much for each audience action and a low CVR means they’re not getting a good return on that investment (ROI). We wanted to see if there was a way Taboola could enhance our solution to make it easier for advertisers to lower their CPA or increase their CVR.

That’s why we created the Attentive Audience program.

It’s a new way that Taboola collects, aggregates, and filters audience data to be more meaningful for advertisers looking to improve these two metrics. Keep reading to discover how we developed the program and rolled it out to select advertisers.

The basics of the Attentive Audiences project

Before we get into the details of the project, let’s go over some relevant definitions and concepts.

Attentiveness Event: A request from an advertiser’s website to Taboola’s servers containing a distinct name and attentiveness metrics value.

Attentiveness Rule: This rule is a unique set of conditions based on the attentiveness metrics set for each advertiser. For example, time on site > 30 seconds and number of returning visits > 2 visits

Cost Per Action (CPA): The amount of money an advertiser pays for a single conversion. It’s calculated by dividing the total budget spent by the number of conversions.

Our goal for the project

Our business goal for this project was to increase CVR or reduce CPA, as they are both dependent on the total number of conversions. We planned to do it by offering advertisers a unique retargeting group of attentive users who have a higher chance of converting on their website.

How we implemented the project

To create a unique group of attentive users for each advertiser, we set up a dedicated workflow to handle the data collection, digestions, aggregation, filtering, and presentation.

We used the Taboola Pixel to collect the users’ required session-related attentiveness metrics when they visited an advertiser site. The data was then sent to the Taboola servers by an attentiveness event at a defined time interval.

The attentiveness conversions are then written to a Vertica cluster for further aggregation. The data aggregation is performed offline daily and looks for two types of data per advertiser:

The most important filter happens at the end of this stage by verifying multiple-day results of the earlier filters to determine the attentive audience viability group for each advertiser. If the data passes this filter, Taboola offers the Attentive Audience enhancement to the advertiser.

Advertisers that are offered Attentive Audiences find it in three areas of the Taboola Ads campaign management platform.

It will appear as an option for the advertiser on the Recommendation screen.

When setting up a campaign

Attentive Audiences is a targeting option when setting up a new campaign: 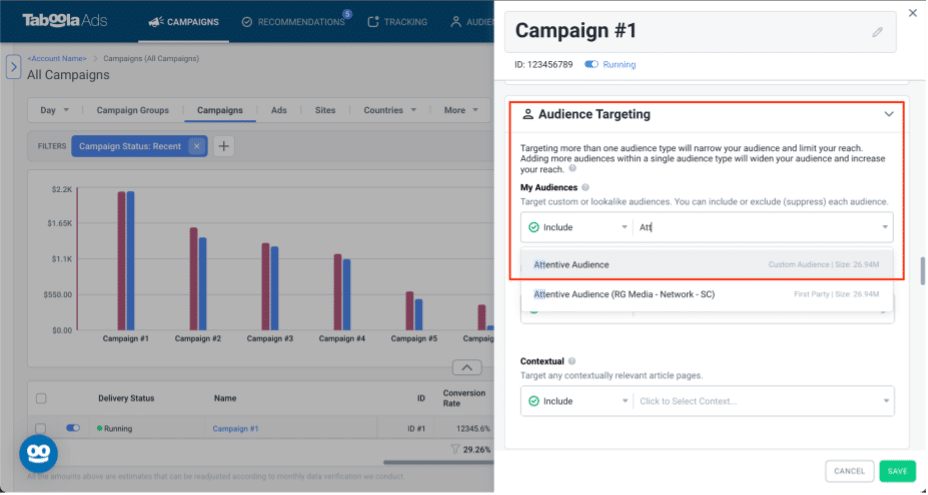 When viewing their audience types

It appears as an audience type on the Audiences screen.

We currently have thousands of advertisers using Attentive Audience, and they’ve enjoyed significant success. Advertisers enjoyed a median CVR increase of 87% and a median CPA decrease of 34%.

Here are just a few examples of advertisers who enjoyed great success with attentive audiences:

We also noticed two main drawbacks to the Attentive Audience project: only a few advertisers qualified for it, and we couldn’t target audiences outside of advertiser site visitors.

Areas of improvement for the Attentive Audience project

Secondly, the project only looks at an advertiser’s website visitors, but Taboola offers many more audiences than that. We need to find a way to discover the users who have a high chance of converting but haven’t necessarily visited an advertiser’s site first.

As a first attempt, we are pleased with the Attentive Audiences project. It was a good exercise for our engineering teams to learn how to help advertisers in a specific way and reach more of their business goals. We were able to find, aggregate, filter, and present relevant targeted audiences to advertisers so they could hit more of their business objectives, like increasing conversions, lowering advertising costs, and growing revenue.

We look forward to enhancing the project in the future to scale it up to the level where we can offer it to all our advertisers.