From 1 Employee to 1,000 to 1.4 Billion People We Recommend To Every Month, Capturing That “Moment Of Next”

Today, we are over 1,000 Taboolars strong. I never imagined this day, but we did it, together. I recently met with our VP of HR, Neomi Farkas, and she said, “Can you believe it? We’re about to become 1,000 employees.” She then said, “Do you remember that in 2012 I emailed you when we were just 50 and we were all excited about it?”

My response was, “Please, send me that email.”

I started Taboola 11 years ago when I was just 26 years old. It was my first “job” after spending almost seven years in the army as an engineer in the encryption space. At the time, I didn’t know what a deck was or how to look at a P&L, and my English was good but not great. But, with only 24 hours a day and life feeling too short as it is, I was madly obsessed with the idea that human beings can live a fully personalized life when they can explore and discover things that are new and interesting and you can enrich their lives. I set out to build what I believed would be the ultimate recommendation engine. A search engine but in reverse—instead of expecting people to search things, have information find us wherever we may be. Because wouldn’t the ultimate search engine be one where I don’t have to search for anything? A search engine without a search box.

We started Taboola as a video recommendation service that was integrated into video players using ActionScript 2. Our logo was different, and our tagline at the time was “personalized video discovery.”

The first five years were really tough. I moved to America in May 2009 to find us partners, and a business model. The video product was too early, and while our technology was unique, the market wasn’t ready for it. We were on the verge of shutting down Taboola three times during those five years, and managed to get lucky every time for different reasons. One time, our CTO Lior Golan, who has been by my side now for nine years, even invested with his own funds just to show the world that he believed—we believed.

Our very first publisher partner was 5min, another start-up founded by three friends back home in Israel—Ran Harnevo, Tal Simantov, and Hanan Laschover. We ate couscous together in a small town, and I told them about our advanced capability to promote videos people may like and never knew existed, while generating revenue from promoted products. Over that lunch, Ran said “sure, send us the code—we’ll put it in our player.” Here is what it looked like: 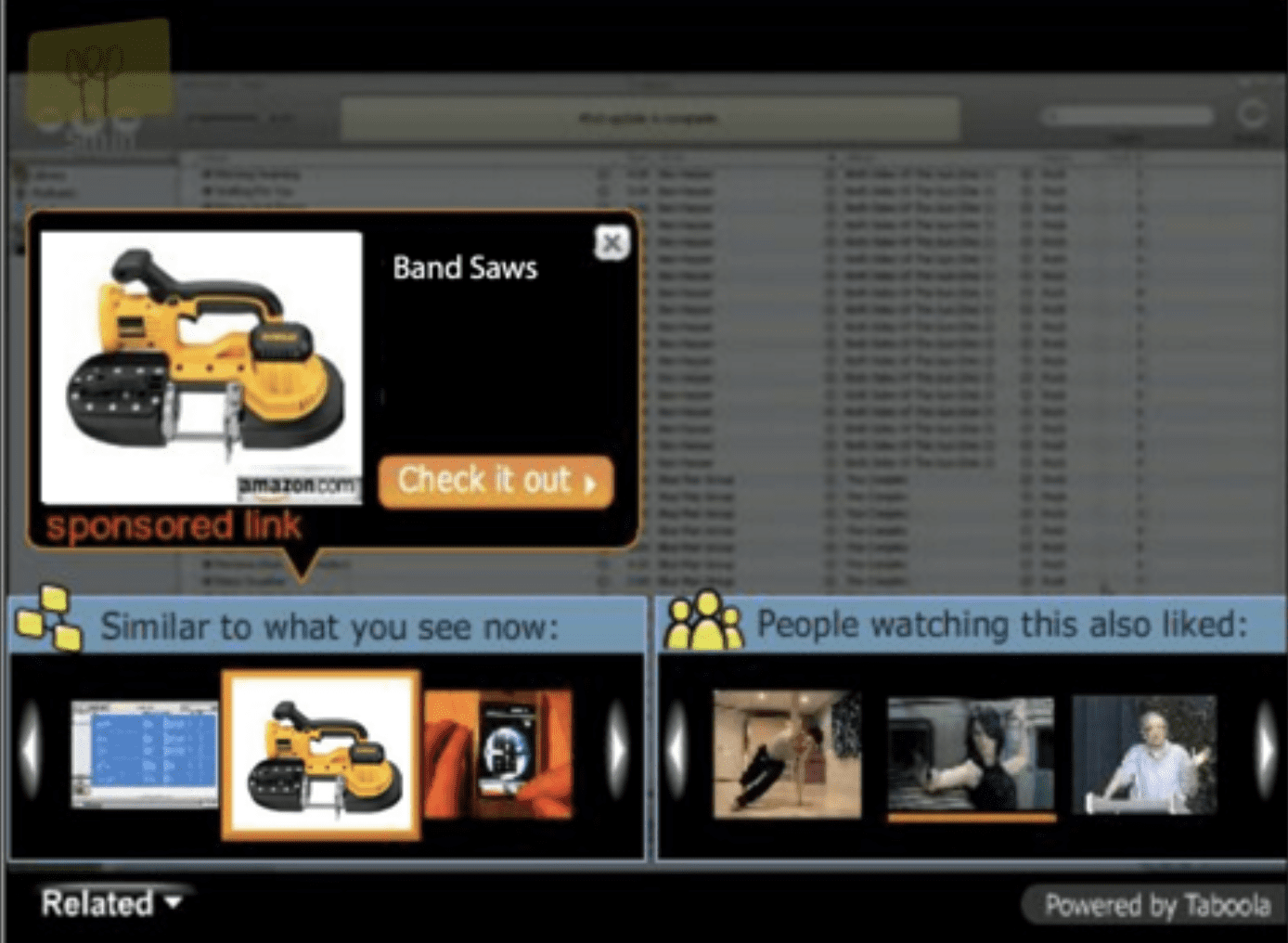 Sometimes in life all you need is a chance, and I am forever thankful for that opportunity. Up until now, in our database, 5min is listed as publisher ID #1. Since then 5min was acquired by AOL, we’re very proud of our long lasting partnership with Oath, and I was even lucky to be a small investor in Ran and Hanan’s new startup called Homeis alongside Spark Capital, and Tim Armstrong.

In November of 2011 we decided to expand our technology beyond video players, and recommend anything and anywhere. Our first integration on an article page was on a site called AskTheBuilder.com and Tim Carter, the founder and a lovely guy was actually the one who did the partnership with us. We were so excited…this is what it looked like: 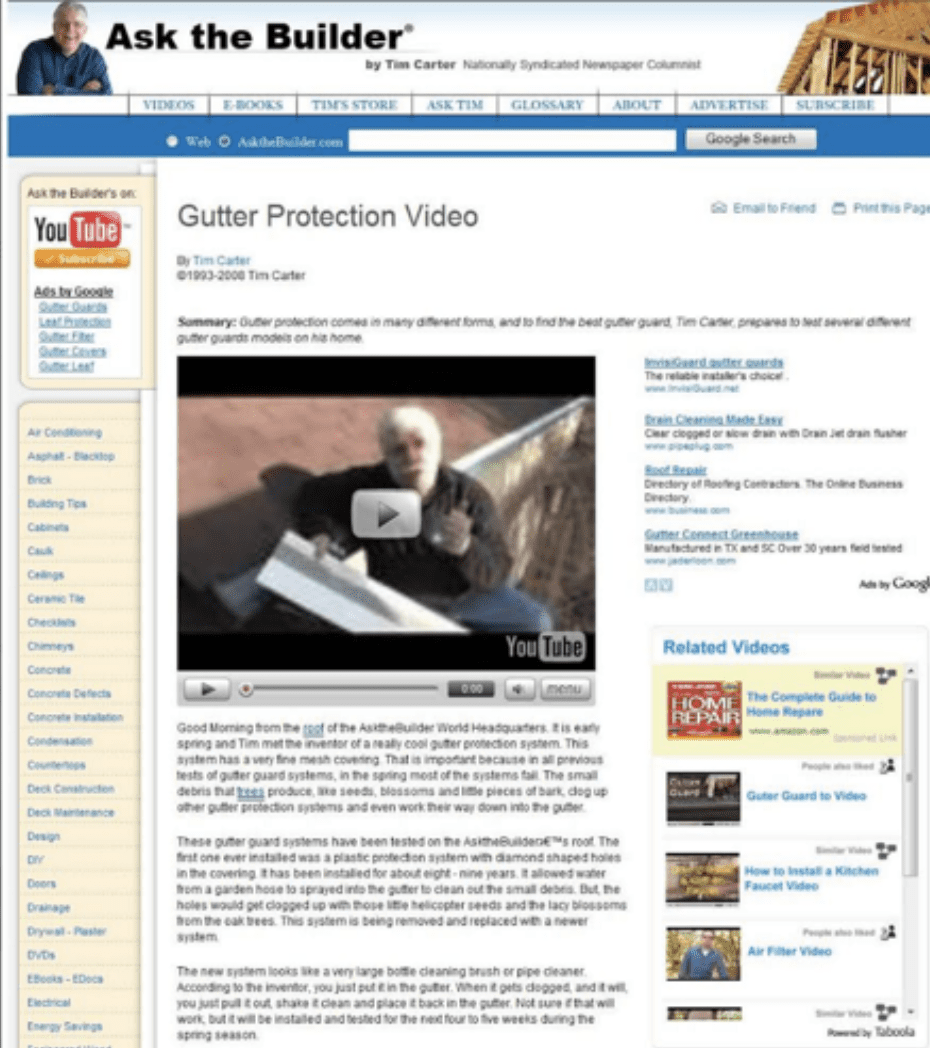 We started to grow. And fast. Really fast. From $100k in revenue and 50 people in January of 2012 → to $200M+ and over 200 employees in 2014. As part of that growth, we were fortunate enough to attract global and strategic investors who wanted to be part of our journey. Big investors like Fidelity, Comcast, Baidu, LVMH, Yahoo Japan and more.

We’ve raised a little over $160M and while we were aggressive in hiring and acquiring other companies, I’m happy to say, most of that money is still at our disposal. We were (and still are) “lean & mean,” “eyes on the ball,” working hard, investing in people and culture, and becoming true partners to amazing companies. I’m proud to say we continually and strategically work with companies like Microsoft, Axel Springer, Bloomberg, Business Insider, CBSi, Comcast/NBCU, China Daily, Cox, Daily Mail, El Universal, Le Figaro, Gannett, Hearst Newspapers, The Independent, NDTV, News UK, NYDN, Oath, Sankei News, TMG, Tribune Media, tronc, The Weather Channel, and thousands more.

On the advertiser side, it is incredible to see startups and small businesses as well as bigger/well known companies using Taboola to tell their stories just at the precise place and time where people are more receptive to it—capturing those “moments of next.” And, it was even more incredible to see their sales soar. We are part of the growth stories of amazing companies like Dollar Shave Club, Blue Apron, and Ancestry.com, as well as household names such as Intel and IBM.

One of the things I’m personally proud of is our strong effort to fight Fake News—something we started two years ago. We realized that to solve a problem created by humans, you need humans. We published our policy, wrote about the topic, and started a team to review every single URL that was submitted to Taboola. In fact, we review over 1 million URLs every month globally, and intend to keep doubling down on those efforts.

Here are also some fun stats about Taboola I was able to pull that “you may like:” 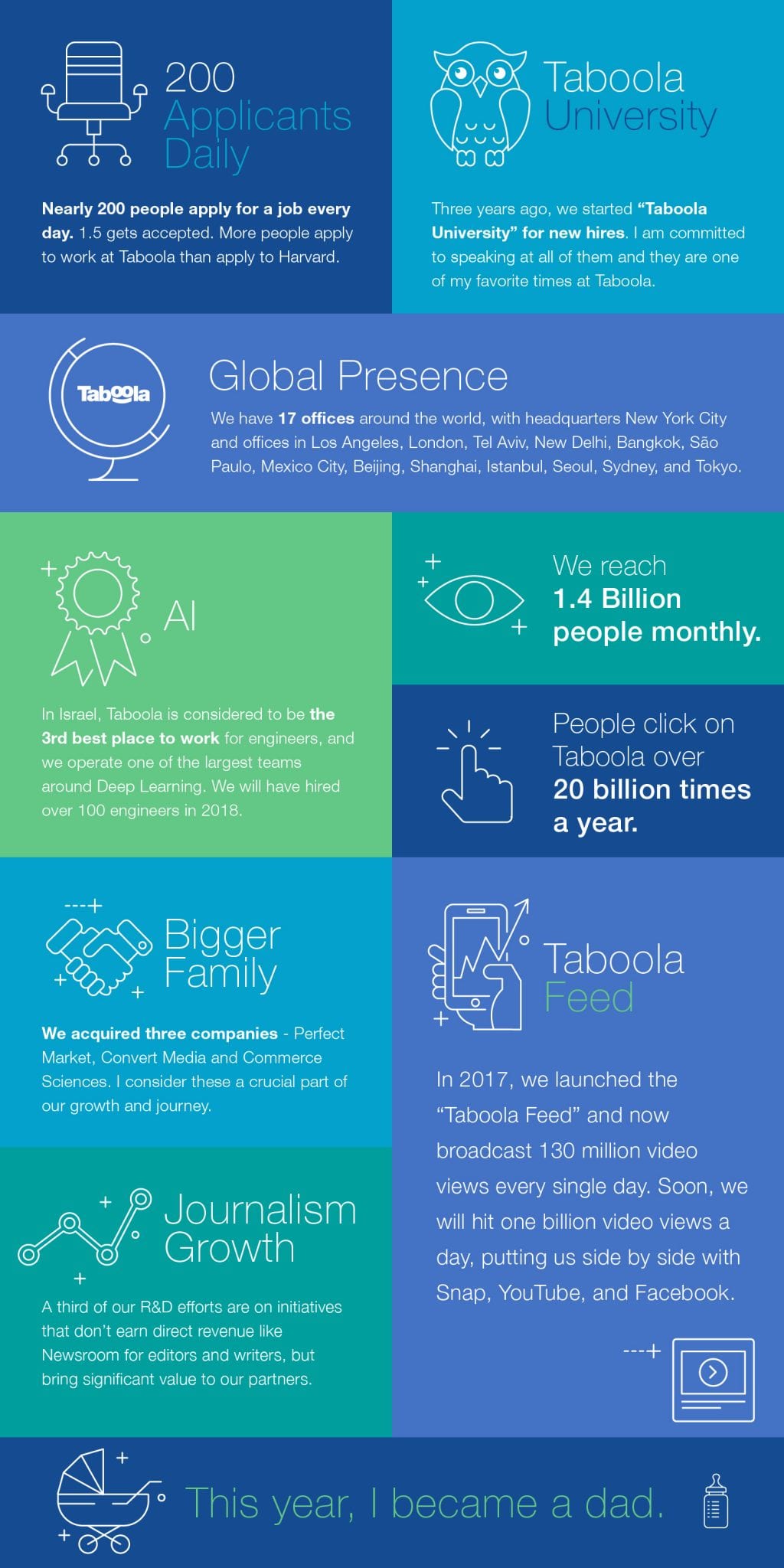 You can copy anything, but you can’t copy a company’s culture.

I can’t describe how much I think it’s important to build a company where everyone feels a sense of ownership, being part of something that matters and knowing they can make a difference. A company people are passionate about, where it develops them as much as it develops the company.

In today’s world, having a big dream and an ability to execute is everything. Things change so fast, so the ability to make decisions fast, admit when things don’t work, and have a strong team working together becomes the “competitive advantage” of companies, everything else is a commodity. You can copy everything, but you can’t copy a company’s culture, and its ability to execute. It’s not easy, especially as nearly 40% of Taboola employees joined in the last year alone—we have to work even harder to not become bureaucratic, and to stay a startup, but a scaled one.

As I think about the future of Taboola, and fulfilling our vision and mission—I see 3 things that are important.

I’m proud to say that one of the things that makes Taboola such a special place is how much time we’re spending together, which is so important as people carry our culture forward, sharing both successes and mistakes, and growing together as professionals and as people. 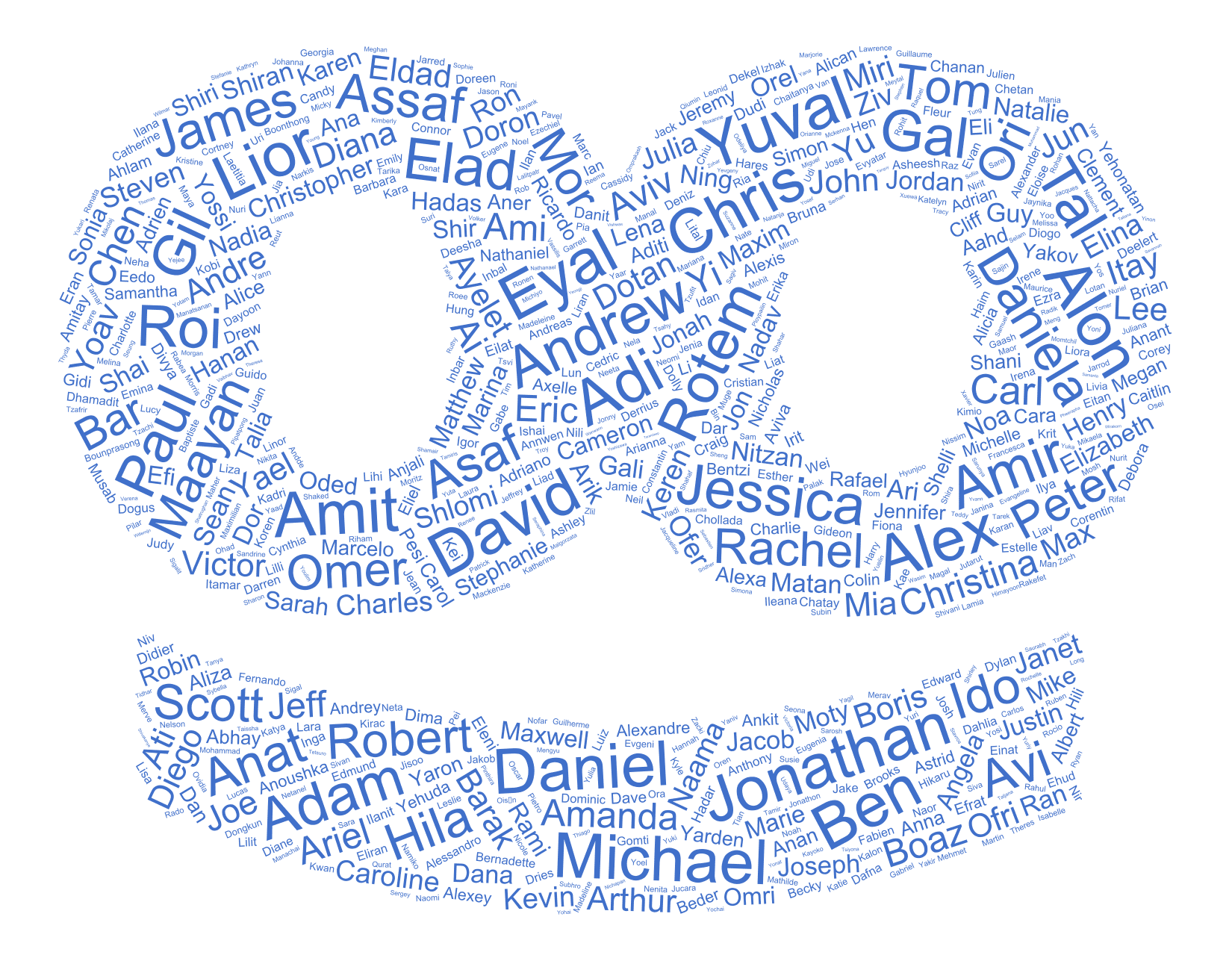 A special thanks is due to those who have walked the distance with me, who joined over 7 years ago, and have stayed throughout…Ruthy, Alon and Eyal who served in the same unit as me and came along to support the dream. Avi, who joined our engineering team over 10 years ago and has great partners like Roi and Moty. Mosh who left a big tech job 10 years ago to join us, Adi and Yoni who know more about the origin of our FE technology than most. Nurit who joined our finance team nine years ago (back then there were not as many numbers to crunch) and Miri who joined a couple of years later and cemented the fact that Taboola has the most heart-driven finance team around. There’s David, a cello player who joined as a part-timer eight years ago and became a leading member of our engineering team and there’s Gil, who now leads our Algo/AI team, and has a heart as big as his brain (which is saying a lot, let me tell you).

Mike, Cortney and Andrew M. were among the first to join me in NY when our office was a tiny room and we were basically sitting on top of each other. Andrew N. joined a little later as a salesperson and helped identify what a huge opportunity we have with emerging publishers, and he now leads that business. Aviva was also one of the first to join in NY, and later moved to the London office to continue her professional growth. We’re lucky to have people who genuinely care about others. Like Reut who has been taking care of the Tel Aviv office and its people for years (I call her “ninja”). Lior, who I had to convince over a good burger to join as our CTO nine years ago, Aviv our SVP R&D who started as an engineer, and of course Eldad, our President & COO who came on board in 2012, and Neomi our VP of HR who joined because she was inspired by the people we already had, and wanted to help grow the team without changing its core.

And there are so more many amazing stories — Alex who came as an intern and now has a  leading position in product marketing, Peter who also joined while still in school and made a career and a ton of friends, Steven helped establish the UK office when he moved back from the US to his homeland. There is Amit who came in with very little technical background only to become a huge asset to our R&D team through hard work, brains and caring. People who took the risk and relocated with Taboola, taking their families with them—Lihi, Dima, Ori – and made a big impact before and after their moves.

To you, and to all of those who joined later from Asia Pacific, Europe, Latin America, to your families who support this crazy ride we call Taboola—I want to use this opportunity to thank you. Thank you for choosing Taboola, giving your heart and soul and becoming an integral part of our narrative as a company.

That’s it. 11 years, 1,000 employees, 1.4 billion people we recommend to, and one blog post. I’m fortunate to be part of this family, calling this “work,” and feeling this is just the beginning.